This Is Saturday Watch And Smile 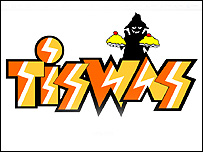 Between 1974 and 1980 Chris Tarrant, Sally [OH GOD WAS SHE HOT!] James, John Gorman, Bob Carolgees and Lenny Henry presided over and caused mayhem on national TV.

Major rock stars (including Status Quo who seemed to be on every week) and top comedians (as well as Jim Davidson and Frank Carson) turned up unpaid to be locked in a small cage then soaked and flanned by the Phantom Flan Flinger.

Although cartoons were shown, also featured were segments like Compost Corner and The Dying Fly that were so stupid as to be awesome. Sally using matelots' cap ribbons as garter belts could cause a teen to cream his pants! [although I admit nothing!]

Tiswas resulted in many Saturday morning skirmishes between younger siblings who wanted to see the (oh so sensible) Swap Shop, but older, wiser heads knew what was best - and got to the only TV in the house first.

Small children wandered about on the set of the show but no-one had any idea why they were there. It's not like they enjoyed the Legs and Co. dance troupe getting soaked in thin tee-shirts [Ohhhhhhhhh!] or Sally getting covered in custard [.. shit, not the pants again!]

As Winston Churchill said of the program "Never in the field of television have so few people dispersed so much water over so many."

An adult version called OTT (Over The Top) was aired in 1981 but was a total flop. The magic of the sheer depravity of the morning show had slipped away.

Chris Tarrant's battle cry as he soaked all and sundry (including camera men, rockstars, comedians and parents of the small children): "THIS IS WHAT THEY WANT! THIS IS WHAT THEY PAY THEIR LICENCE MONEY FOR!" ... And indeed it was.