Box head Field Marshal who gave our plucky lads a bit of a seeing to in the Western Desert, eventually had to top himself because he hadn't paid his mess bill or something like that. 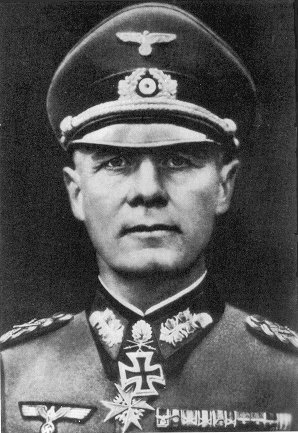 Famous for (in 1942 North Africa) accidentally visiting a New Zealand Army field hospital which was in Allied hands at the time. Half way through the inspection and morale improving visit he realized the mistake, finished his inspection, inquired if anything was needed, promised medical supplies, took a final salute and drove off in his british staff car.

The American beat poet, Richard Brautigan, paid tribute to Rommel in a short verse of debatable quality in the late '60s:

"ROMMEL DRIVES ON DEEP INTO EGYPT"