The Queen's Own Yeomanry 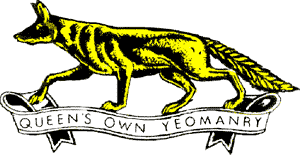 The Regiment was initially formed on 1st April 1971 from five of the traditional Yeomanry units across the North and Middle of England. As the only Territorial Army armoured reconnaissance regiment, the QOY was equipped with Fox armoured cars and CVR(T) armoured personnel carriers. This changed in 1992 when Fox was withdrawn and replaced with the CVR(T) Sabre and Scimitar variants. With the Strategic Defence Review in 1999 the geographical locations of the QOY changed to encompass Scotland and Northern Ireland. The regiments five Squadrons were located at York (Y Sqn), Ayr (A Sqn), Belfast (B Sqn), Cupar in Fife (C Sqn), and Newcastle (D Sqn).

As part of the Army 2020 plans, the QOY was redistributed, losing it's Scottish and Northern Irish squadrons, which were replaced with a new B Squadron in Wigan and C Squadron in Chester, both formerly part of the RMLY.

The Regiment has many battle honours, including some of the most famous battles of the Boer War and both World Wars.

In September 2007, the Regiment was presented with a new guidon by HRH The Prince of Wales at Alnwick Castle.

In 2013, with the phasing out of CVR(T) across the British Army, the regiment was re-equipped with the Land Rover Defender-based RWMIK, a light armoured vehicle, equipped with the General Purpose Machine Gun (GPMG) and the Browning .50 Heavy Machine Gun (HMG), as well as individual BOWMAN digital battlefield communications systems and various surveillance optics, including thermal imaging.

The QOY has contributed numerous soldiers and officers to operations in Bosnia, Iraq, Cyprus and Afghanistan. As part of the Army 2020 plans, the QOY is paired with a regular formation reconaissance regiment, The Light Dragoons. Officers and soldiers form both regiments often work together, and have conducted recent joint excercises in Morocco and the UK. In September 2014, the regiment deployed to Denmark to exercise with Danish and US forces.

The QOY, much like the rest of the Army Reserve, is recruiting now.