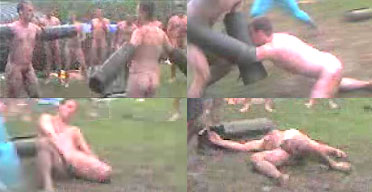 After hours nude pugilism involving the imaginative use of rollmats secured around the upper limbs.

Warring parties would proceed to tater the living daylights out of each other in a drunken whirlwind of flailing styrofoam, whilst being surreptitiously filmed by their inebriated colleagues.

An Interview Without Coffee would invariably follow - especially when the incriminating evidence appeared on the Internet and (ultimately) the News at Ten.

Recently accepted as the Official Martial Art of Iran after the highly successful exchange scheme between Booties and the Iranian Prison Service.