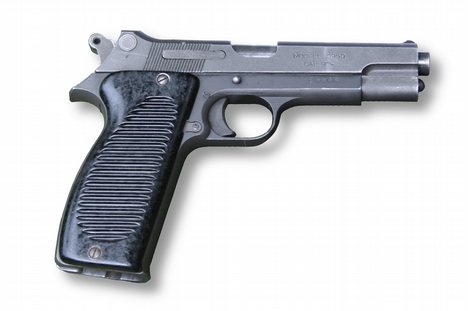 It uses the Browning system like the FN GP 35 with an integral barrel feed ramp, it is a single-action trigger with slide mounted safety that locks the firing pin so the hammer can be lowered by pressing the trigger with safety engaged.

The MAC-50 is primarily based on the Modèle 1935S, for which MAC was the primary manufacturer, although it shares some characteristics with the Modèle 1935A, the design basis for the SIG P210 (SIG licensed the Modèle 1935A design from SACM in 1937).

It was first made by MAC (Manufacture d'armes de Châtellerault) then by MAS (an abbreviation of Manufacture d'Armes St. Etienne - one of several government-owned arms factories in France)

It is now superseded by the PAMAS G1.