Michael Golden is possibly one of the biggest Walty knobby chavs ever to exist. It all started on this thread when he was discovered to have created an online persona with the handle Mikeakapara on Faceparty (see below). Within the hours, days and weeks that followed, it was demonstratively proven that Walts cannot hide from the power of ARRSE.

If you are rushed for time, the gen is this: Mike Golden tried to join the Army but was kicked out after just 8 weeks for being spineless. He has lied about it ever since, even going to the lengths of having a fake tattoo. We found him and will never stop making his life a misery. Now read on...

He was first found here. Here's what he originally had to say about himself:

The Meaning Of Life... in his own words!

The meaning of life to me is do as much as you can but enjoy it coz ppl that spend 4 or more years at college/uni miss out the fun stuff like being young and ppl what ever you do, do something for you and only for you coz at the end of the day ppl can kill u hit u beat u up take stuff 4rom u but they can never take ur soul so be all what u want to be plz the best love of all is to learn to love your self and b big headed coz if dont love you then what chance you got spla

His own website (sadly no longer available to the general public) was later visited. A casual visitor would be met by this welcoming message from Mike:

Use the text above to reference these images (thanks Sixty!):

His 'Para Shelf' in all its glory!

The rather depressing lounge 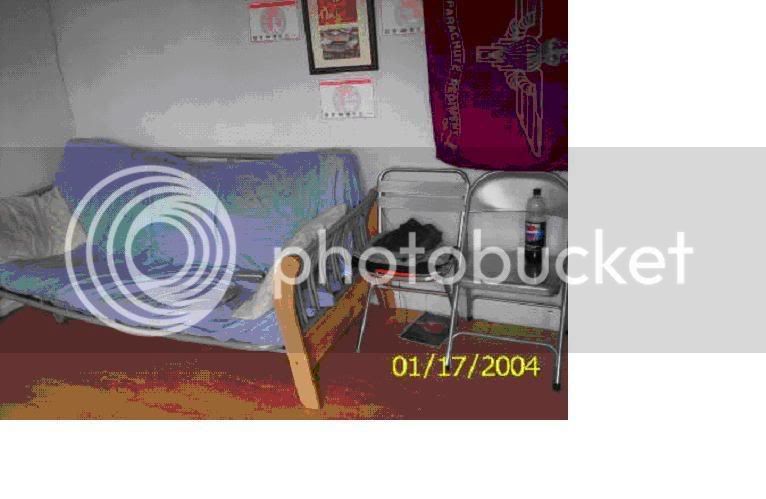 Mike Talks To Himself!

Elsewhere onsite it was discovered that the sad little tosspot also felt it necessary to leave messages for himself:

oi oi sexy boy mike ur a top nutr dat fite with them two blokes over that slut was nuts go on boy u know u fuked that big one up he had 55 stiches on his face u top nutr any way dont about her i hope and that u and that american girl sort it out 2gev u deserve her mate any way round yours 2moz peace out jake!!! ur bad boy for life only mikes!!!!

Mike well done for the other night you kicked there ass plusu put one in hospital you nut case dont woz about her she already getin talen care of mate ok ur brothers keeper!!!frazer..

For may people, the absolute confirmation (were it needed) of Mike's insanity was when a letter - signed by General Sir Mike Jackson himself was discovered: 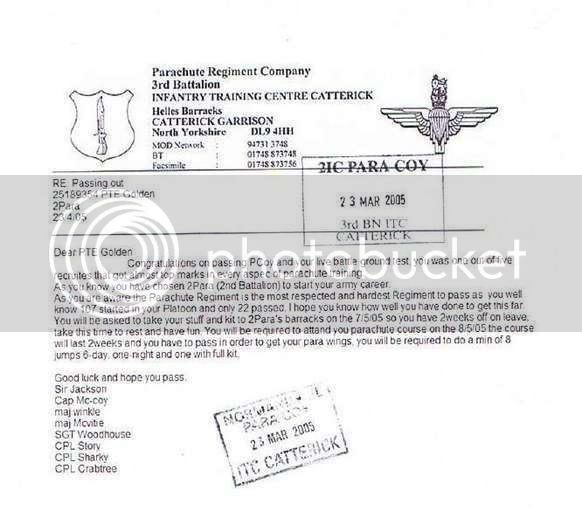 Assuming 'Sir Jackson' (Sir Jackson ... who the feck is he?) actually wrote this letter ... it must be heartening to every illiterate mong in the UK that you can rise to command the British Army with no more than chav/txt speak and grammar that would shame a Lithuanian peasant.

SuperTrooper, while under the influence of alcohol, chose to ring up Mikey boy (who had been kind enough to leave his mobile details on his website)and reported the following:

I've just been speaking at length to Mike's 'mate' on the O2 number. He would not give me his name and did not explain how he has Mike's phone, but when spoken to he refered to Mike as 'me' and 'I'. In essence, he says the following:

A Plea for Calm

I asked Mike's 'mate' to come on arrse and put this totally false thread to rights but, 'he doesn't need to prove himself to anyone! Feel free to contact his 'mate' but please do not abuse either of them as this could be construed as a malicious communication. However, if you are polite, like I was and just ask questions then this might be allowed under the law. Just dont harrass, alarm or distress and make stupid calls and you will be keeping within the law.

Sounds like Mike is on the back foot over this one! Be careful and don't be nasty and this can end nicely.

Eventually Proximo blatantly used his rank and position, asked some questions through the Chain of Command and posted this on the thread.:

The absolute defining moment of this whole sorry episode was when one of his former PTI's at Catterick got wind of his Walting and gave us all the G2 on Mike and how hard he really was. This was none other than Sandy the Guvnor:

Sandy's airborne chum Wingedheretic was good enough to give us a classic account of his time in basic:

Hi, I'm new to this site but was put on to it by Sandy (the guv'nor) when he read about Golden, so I thought I'd have a quick snoop!!!!

I have to admit it's taken me a long time to be able to stand up straight and wipe the tears from my eyes having followed the links - and I thought he was a Walt when he turned up at Catterick! OK, if you want the low down on this tosser, here it comes (it's all gospel as I was one of his instructors up here).

Pte Golden turned up on the platform at Darlington dressed in a softy jacket and chest rig, packed with cam cream (old type), magazines, and Para Reg beret along with other bits of junk to begin his training; so you can imagine he took stick from day one. His report from the Careers Office stated that either he was the most travelled and experienced young man the recruiter had come across, or the biggest Walt ever to have lived (I'm sure you've made your minds up which).

He claimed to have played for Manchester United youth team but decided to give it up to serve in the Paras (as his grandad had done) and serve his country. He also claimed to have studied karate in Japan for several years - obtaining some dan or other. There was no visa in his passport, and he couldn't speak a word of Japanese - not to mention the fact he couldn't fight his way out of a paper bag. Either that or all the other recruits who hated him were hard as nails, because 'karate man' often came running to the staff to say that he was being picked on.

In the first week of training the recruits have to pass a screening week to see if they are up to standard. Granted he passed the BFT, but he only just scraped past on the press ups and sit ups. When it came to the familiarisation with the Trainasium though, it was a different story! The recruits are just expected to do the low stuff in slow time to see their reactions. Sandy was their PTI and Mr Golden managed to climb only three rungs before freezing and clinging to the ladder like a cat in a tree (I kid you not).

Sandy had to physically go over to him and pull him off (he was about 5ft up!). He was given a second chance and froze at the top and began to cry! Sandy was again called upon and after we had turned the entire platoon around to minimise his embarresment (the boss' orders not ours) Sandy went on to lead him over the obstacles by the hand!

Normally this would mean him being told he wasn't up to the required standard and given the chance to try line infantry, but he had an interview with the boss and begged and cried to be given a chance as he had always wanted to be a Para (he had promised his grandad on his death bed he would wear the maroon machine beret etc.), and that he would do everything asked of him and overcome his fear of heights. Needless to say the boss gave him his chance though he admits it was a huge mistake!

For the next few weeks he continued to drop himself in the poo and his section commander, Cpl Brooks did his best to push it up the chain to bin him. Then he started to have family problems and needed to get home for funerals (I think he lost more relatives than anyone I have ever known) on a regular basis (weekends mainly). Without fail he turned up late back from the time off he was given with some implausable story as to why he couldn't get back. On one occasion the train had been cancelled, unfortunately neither British Rail nor myself, and I was on the train in question, knew this!

Anyway, he continued to bullshit and get in trouble and eventually the powers that be had had enough and he was kicked out. He spent 10 weeks give or take with us and got kicked out as unsuitable for army life (the army doesn't like to do dishonourable discharges anymore).

In the last week with us though, his mum phoned the platoon office to speak to the boss but got Sgt Woodhouse instead and pleaded with us to rethink letting her son go as it was only a minor back injury he had and, after all, as our best recruit, we would need him when the platoon was fastracked through basic to support 1 Para on ops in Sierra Leone in December!

Our boy Golden had taken his Christmas leave dates and told his mum he wouldn't be home as he was off on ops! Needless to say the Plt Sgt put her straight, and even she was shocked to find out what a Walt her son was. When we asked him about it in the corridor he claimed he had no idea what his mum was on about - or why she would phone up!

Anyway a week later he was gone. We kit checked him just before he left and found he'd stockpiled all sorts of regimental memorabilia to support his fantasies. Anyway, the short of it is that he didn't even get half way through basic (he shouldn't have been allowed to pass Week 1) and was kicked out. He was universally detested by recruits and staff alike and would not be allowed to rejoin ever.

He has not ever served in any theater (the closest he has been to one would be the Barbican). The Jedi thing is something he picked up from here (the instructors are jokingly refered to as master Jedi). There's more but I hope you get the gist. As I said I was part of their training team and the little cnut has even had the audacity to include my name on his fake letter.

I'd love to bump into him one day as it would do the old ego the power of good to drop a European champion, or even to watch him run in fear and tears away from me! Sandy the guv'nor will be able to back me up on all of this as he was the PTI at the time.

Hitler had the Wolf's Lair. Mikey had the Walt's Lair

Mike prepares to knock us all out!

Mike and his pucka Reg tattoo - possibly the saddest sign of just how sick he is...

Mike holding what can clearly be identified as two break barrel .177 air riles, standard issue in the maroon machine.

CURRENT PASSWORD IS PAINT BE QUICK BEFORE HE CHANGES IT!

Various ARRSErs felt the need - no, the compulsion - to leave messages for Mike. You may read them here.

After a little searching of the NAAFI bar, I found this little gem, well worth a look here for all fans, old and new of the 'Golden Days'.
A special thanks to JennyTwoWombs for providing a little more insight of the life of Golden Boy.