A "city" on Merseyside full of seperatist minded fuckwits with a river running North South to its West. The River Mersey separates the natives from the woollybacks of Birkenhead. Linked with the East Coast of the USA and strong links with Shanghai China 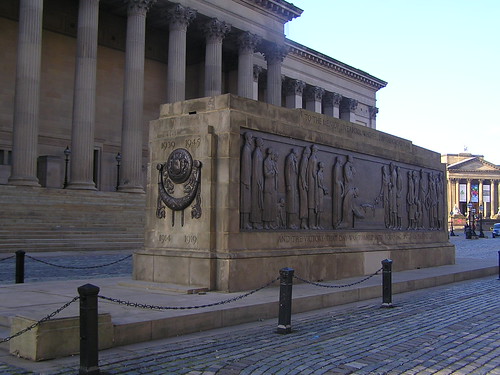 The Thiepval Memorial by Edwin Lutyens

was one part of the original Liverpool Catholic Cathedral which was never built due to the outbreak of the world war. All scousers are proud that a building that should have stood near the Mersey stands near the Somme as a tribute to the Missing of the Somme.

Well you know what they say don't you? Why DOES the Mersey run through Liverpool? Because if it didn't some Chav Scouser would mug it! Boom! Boom!

St. Peter is standing at the Pearly Gates one day when up walks a Group of forty scousers. St. Peter tells them that there isn't enough room for them all and goes off to ask God him which ones he should let in. "Pick the ten most righteous. They shall enter Heaven !!" says God. Ten minutes later Peter comes back to God,"They're gone !!" he exclaims. "What, all forty ??" says God. "Not the scousers" says Peter "...the fuckin gates!!"