Portly journalist and television news correspondent who is single-handedly responsible for liberating Iraq.

Like an overweight David Attenborough with a death wish, quite how this man has avoided getting his arse shot off is beyond me. But it's got to be said that if I'd gone to half the places he's been, I'd want (at the very least) 49 Para's laundry detachment in attendance. 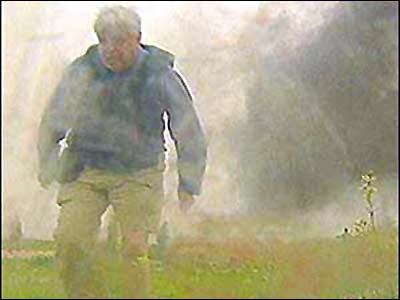 John Simpson staggers away from Friendly fire airstrike on his convoy in northern Iraq.

Very fetching when dressed in a Burkha (see above - note the clever eye makeup). Apparently got touched up the bazaar while wearing it.