Incredibly hot spam actress in the 1960's, she seriously blotted her copybook by being a pinko commie and opposing the administration over Vietnam.

Compounded this with a mahoosive mistake in having her piccie taken sitting astride an AA gun (see below) outside of Hanoi when american airmen where being shot out of the sky. She regretted this in later years and has repeatedly apologised to vets and POW's.

Has been outspoken over feminist issues, native americans, palestinians and was anti Iraq war.

As you can imagine ... not well liked by Republicans.

... and a few delightful quotes from Hanoi Jane 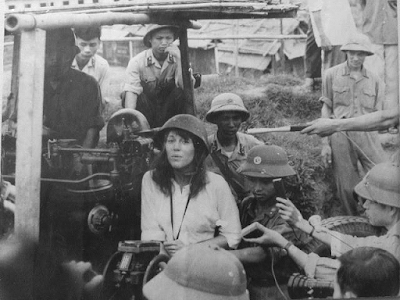