The Denison smock first appeared in the early 1940s, the design of a Major Denison. Sixty years on it has acquired a special, even iconic, status among collectors and aficionados of camouflage uniforms.

The Denison smock was conceived for Airborne forces, and at first issued only to them. Later in WW2 Commando units also used them.

The smock is said to be based on the work clothing of northern French artisans of the period. It certainly is practical and hard-wearing. The fabric used for the first Denison smocks was a hand-painted DPM fabric, and subsequent iterations, though relatively mass-produced, have replicated the distinctive hand-painted look.

Early smocks had a half-zip, though later versions always had a full-length zip. Early ones also seem to have had button cuffs, although later the familiar knitted cuff became standard. All versions had a crotch-flap sewn to the lower rear hem, attached to the lower front skirt by press-studs when in use and to the outer rear back of the smock by a pair of studs when not in use. Its purpose was to prevent the smock billowing up when the user jumped from an aircraft. The Denison smock was always well made, of strong woven cotton, with top-quality zips and Newey press-studs.

After WW2 the Parachute Regiment and in some cases, the French Foreign Legion and Royal Marines continued to use the Denison smock - no doubt in part because its distinctive appearance helped reinforce the elite image - and new (though very similar) versions were created in 1959 and 1972. At that stage the British Army's DPM was being recognised as a very effective camouflage pattern, and in the mid-1970s the Denison was finally replaced by the new Para Smock, similar in design to the Denison, and Smock, Arctic, windproof, both in DPM fabric.

The Denison Smock was also used by Pakistan, and both Rhodesia and South Africa who was issued a Sand Coloured variant prior to the Slangvel (SA Para Smocks). It must be noted that the Denison Smock formed the basis of the similar Belgian and French TAP 47 Para Smocks and the layout of South Vietnamese Tigerstripe camouflage pattern. Prince Charles even has a thing for them over Para Smocks: 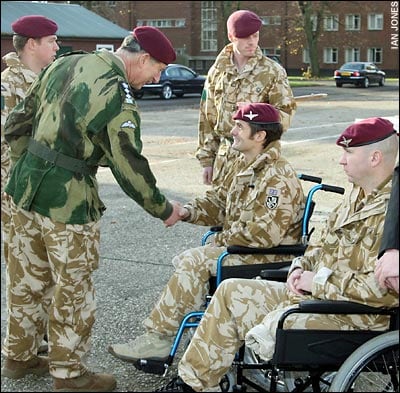