The famous bomb dropped from the Avro Lancaster during the Dambuster Raids.

The bomb was designed to be spun backwards at high velocity (500 rpm) before being dropped. When dropped onto water it would skip (bit like a flat stone) over the water (avoiding obstacles). The bomb broke apart unless it was dropped from scary low height (18 m / 60 ft) no faster that 250mph (386-402 km/h-ish)and about 500 yards (450m) from the target. On striking the dam the bomb would sink (the spin keeping the bomb up against the dam wall) to a depth of 9.1 m (30 ft) before being detonated by hydrostatic fuse. Water pressure did the rest in containing the blast and directing it against the dam as well as applying a huge weight of water on the now weakened dam.

Designed, as was the Wellington bomber, by noted British pointy-head Barnes Wallis. 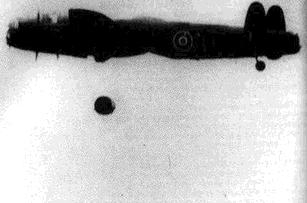 2. British Army slang for the current issue Sleeping Bag which bears a remarkable similarity to the original bouncing bomb when squeezed into its compression sack.