There were two Boer Wars (three if you count the Boerewors sausage, but few serious military historians do).

The first Boer War involving the British Army and the Boers was just after the Zulu War and Rorke's Drift, lasted from 1880 to 1881 and resulted in a win for the Boer Republic of Transvaal.

The Boer War was famous for seeing the first use of Marconi radios by the Imperial Yeomanry which had to be transported by mule. Replacements took up to 6 months to arrive (whats new?). The usage of balloons for observation by the Royal Engineers also became more widespread.

Unfortunately - for the Boers - this also ended in a win for Britain, ably assisted by troops from Australia, New Zealand, Canada and South Africa itself.

Seventy-eight VCs were awarded and some notable battles entered the British consciousness, such as Colenso, Ladysmith, The Relief of Mafeking and Spion Kop. A number of folk who would later go on to be more famous were involved in the Second Boer War, including Baden-Powell and Winston Churchill. 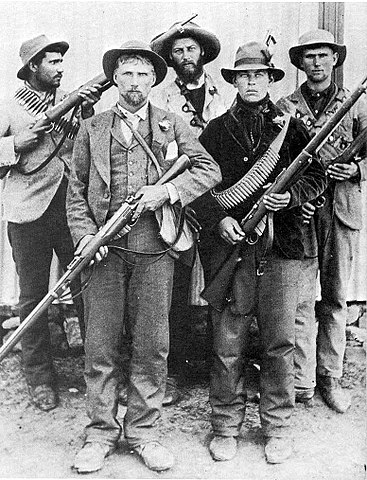