This book is the second in a series of Adventure Stories set in the Second World War, featuring Wren Jane Beacon. It picks up her story as she recovers from the physical and mental injuries incurred on her trip in a small boat to Dunkirk to rescue soldiers and others, and also the way the Navy dealt with her actions.

It’s a vivid description of the impact that war has on people, and a reminder to us all of what was sacrificed by everyone who has fought to keep this country safe from those who would harm us. In addition it’s a good introduction to themes which we think are new today, such as ‘should women serve in front line roles’? ‘Should one generation protect the next, and if so how far?’ and the outright sexism which was rampant in many opinions current at the time. 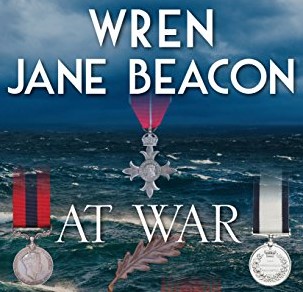 ​
In addition to these big themes, the story continues of a trailblazing lady given command of a small boat working in Dover Harbour to free up men to work on the big ships of the Royal Navy, the many achievements and adventures of its two-woman crew, and the diverse ways the Wrens helped one another having formed good relationships on their initial training course.

Of course, with many men and women away from home for the first time, affairs of the heart are involved and some interesting topics around sexual liberation, ignorance and healthy relationships appear. The story ends with her finding what looks to be the love of her life, and leaves the way open to see whether this will actually be her ‘happy ever after’ in a future book.

I enjoyed this book very much, but as the story progresses from the rip-roaring adventure of the Dunkirk trip, and becomes, slightly more mundanely, about Naval Discipline, affairs of the heart, and women striving to make their way in a man’s world, I feel it has lost a little of the impetus and excitement of the first book in the series. I look forward to reading the next one.

An Englishman at War