Oh boy, this is going to get me into terrible trouble with Harriet Harman and her sisterhood.

But how come the French have such knockout lovelies for their female politicians? And how come our Hon Lady Members are, well, a little more on the bookish side?

Christine Kelly, newly chosen as France's Minister for Overseas Territories, was photographed today in a bikini. The 39-year-old looks like a model out of a lads' mag. It's not fair.


Christine Kelly, left, 39, has just been chosen as France's Minister for Overseas Territories while 32-year-old Mara Carfagna, right, is Italy's Minister for Equal Opportunities and No.4 in the most stunning politicians poll

French parliamentary sketchwriters get to feast their pens on this pouting, pearly-toothed creation while we Westminster scribes have to put up with the likes of Ann Widdecombe, Clare Short and Patricia Hewitt.

This is not merely my male chauvinist pig opinion.

Topping this list of beauties is Luciana Leon, a 30-year-old Peruvian whose flowing blonde hair and Colgate smile would raise the temperature in a debate.

She's followed by another gal from Peru, more matronly certainly, but there's little doubt that Mercedes Araoz, 47, would catch many a watery Westminster eye.

Here are ladies from Ukraine, Spain, Italy and Japan. Even Estonia has its youthful representative in the sultry Anna-Maria Galojan.

But in the top 50, of our British beacons of democracy there's no sign. Why should this be? The answer is that it is wildly unfashionable for female MPs to be sassy. They try hard to be the opposite.
Yuri Fujikawa

5. Yuri Fujikawa, 27, is known in Japan for her glamour and her youthful political success. She caused a stir by posing in her bikini to attract tourism to Hachinohe City

Harriet Harman, who covered for the absent Gordon Brown at Prime Minister's Questions today, is always turned out smartly. Today she was in a pinstripe jacket - V. butch.


But she would be first to assert that she is not Mademoiselle Kelly. Indeed, lifelong feminist Hattie would be horrified to be photographed in her swimming costume. One slightly doubts she even owns a bikini. I somehow picture her in one of those Edwardian bathing outfits which protected a gal's modesty.

Miss Harman, while undoubtedly feminine, goes to great lengths to appear non-sexy. She would regard it as fatal to play up that side of things - it would undermine her credibility. That is true of many of our Westminster women. They have drunk deep at the feminist well. Most of them used to read Spare Rib long before they looked at Hansard.

Theresa May, Tory pensions spokesman, does have her kittenish moments. She has made something of a name for herself not only as a bright parliamentarian but also as a buyer of leopard-print shoes. They are not necessarily the most practical of footwear, but they helped to create a public persona for Mrs May.


L-R: 9. Eunice Olsen, 31, once hosted Wheel of Fortune but is now an MP in Singapore; 10. Cayetana Alvarez, 34, is a Spanish free-thinking historian who campaigns against corruption

And yet it is fair to say that easily the poutiest, most fragrant figure on the Tory benches is shadow leader of the House Alan Duncan.

On the Labour backbenches we have lost the great and late Gwyneth Dunwoody, alas. My friend Gwyneth sent me a jocular note when I described her as a Rumpole lookalike.

She even ventured that Rumpole actor Leo McKern could sue.

She would never have won Miss World but she was beautiful in other ways - not least in her ability to irritate New Labour Whips.
Vera Lischka
Alina Kabaeva

L-R: 11. Vera Lischka, 31, is an Austrian former Olympic swimmer and TV presenter who took up politics; 12. Alina Kabaeva, 26, is a former gymnast for Russia but is now a politician

And what of that old warhorse Margaret Beckett, sometime pin-up for the caravanning fraternity? Or Hazel Blears, the Ronnie Corbett of politics? Shouldn't they have made the list? Then there is Ruth Kelly, who went from crophaired stodge to blonde-tressed lovely. Though she sounds like Arthur Mullard, that wouldn't have disqualified her.

Elsewhere on the Labour side we have the likes of Fiona Mactaggart (Slough), the former public schoolgirl who has a cough like a sergeant major and hauls around a handbag which may well contain boulders.

Sandra Osborne (Ayr) could be mistaken on a dark night for darts player Jocky Wilson and Treasury Minister Angela Eagle (not one for the chaps) is looking increasingly like a bloke, dressing in two-piece business suits.

The quality of their debate may be superior. But perhaps, on reflection, it is easy to see why our dear old Westminster girls are also-rans when compared with the dazzling array of gamine creatures who have made the grade in this international beauty parade.
Click to expand...

Her dad may be a convicted gun runner but she does look nice in a miniskirt.

"I've seen things you people wouldn't believe; attack ships on fire off the shoulder of Orion... I watched C-Beams glitter in the dark near the Tannhauser Gate. All those... moments... will be lost in time...like tears in rain... Time to die"

Newspaper story with pics
http://www.dailymail.co.uk/femail/a...ing-politicians-WOULD-Sir-Humphrey-say--.html
including 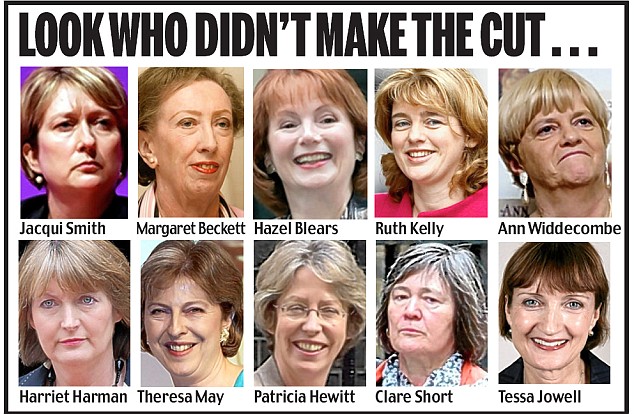 And, while about it why did they miss Beni's granddaughter Alessandra Mussolini?

Can we have a link to the original so we can look at the pictures ?

hmmmm...
"If there is one thing worse than a murderer it's a dirty rotten stinking grass... and that goes for litterbugs as well."

interestednovice said:
Can we have a link to the original so we can look at the pictures ?
Click to expand...

Daily Mail
"I've seen things you people wouldn't believe; attack ships on fire off the shoulder of Orion... I watched C-Beams glitter in the dark near the Tannhauser Gate. All those... moments... will be lost in time...like tears in rain... Time to die"

'Beautiful Life Without Nazis'. Annoying that a political message like that is cheapened on a 'me me, look at me' t-shirt.
I