Winning Wars the Enduring Nature and Changing Character of Victory from Antiquity to the 21st Century Editor Matthias Strohn. 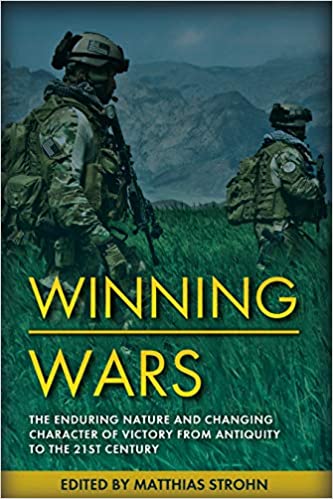 This is a book of themed essays, similar to those edited by Matthais Strohn as the the 2016 and 2018 Op Reflect Army Staff Rides readers. The theme of "what does winning mean" was logical extension of the reflection on the consequences of 1918. "Today we see terms like ‘defeat’ and ‘victory’ as being harder to define given that success is often more about the triumph of a narrative as opposed to the facts on the ground." (Nick Carter in 1918 Winning and Losing the war) "War used to be about beating the enemy sufficiently soundly that you could demand of them whatever you wished once the fighting was over. Yet very few wars or conflicts since World War II ended with decisive outcomes as a result of swift or direct military action."(Andrew Sharpe Winning wars)

This work is an attempt to put winning into a military and political perspective by the Centre for Historical Analysis and Conflict Research, (CHACR) “Independent think tank of the British Army” . Matthias Strohn is the Head of the Historical Analysis Programme and the conclusion by Andrew Sharpe, Director. This is CHACR$’s attempt to build on the work of long dead Karl.

Hugh Strachen’s introduction takes no prisoners in its critical review of British defence policy. The book includes essays from a pantheon of historians and military experts about how different societies at different times have seen winning in war. In between the introduction and conclusion are chapters written on what winning war has meant since antiquity and for a range of perspectives such as China, Russia, Bashir Assad or the IRA.

There is a lot of good thinking in this work and much which is thought provoking. Relatively jargon free, but a lot of things to absorb. Plenty of useful concepts for stirring up stuff in discussion on international affairs and military history.

S
Changing of the Guard