Barrett Tillman has ties to the US Air Force, Navy and Marines and the Royal Navy. A pilot, he has hundreds of hours in historic aircraft. A historical lecturer, he has appeared at the Smithsonian, the Naval War College and on various TV channels and has written more than 40 books.

'When the Shooting Stopped' deals with the last month of World War Two and Victory over Japan day. With the dropping of the two atomic bombs on Hiroshima and Nagasaki it is easy to think that was the end and the Japanese agreed to surrender. This book tells of the fighting and diplomacy that went on in August '45 before, during and after the bombs. Conventional warfare against the Japanese consisted of combat not only with fanatical troops that would fight beyond normal circumstances to the death, but also kamikaze airmen, sailors and soldiers, including a raid on Okinawa which destroyed USAF aircraft in May, with another planned in August which never took place. 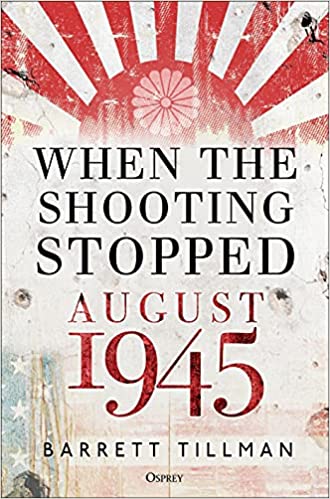 The book mostly concentrates on naval and air warfare which continued right up to and just after Japans acceptance of the Potsdam terms with USN and RN naval operations at sea and the USAAF in the air, mostly B29 missions including the dropping of the bombs. USN and Fleet Air Arm raids are covered with airman's names including losses. Some of these airmen survived their shoot-down only to be executed by the Japanese in revenge. Japan continued to be well armed and was in no mood for surrender; laying hopes for Russian intervention diplomatically for a negotiated peace, or to force upon the Allies unacceptable losses in the event of invasion. Instead Japan received the atomic destruction of two cities and the invasion of Manchuria by the Russians. A decision to accept the Potsdam declaration was put in jeopardy by an imperial palace coup, which failed, and resulted in more suicide deaths by the perpetrators.

It also describes how the outbreak of peace was accepted around the world. From wild parties in Allied cities and a jubilation from servicemen that they would not face death invading Japan, to exhausted acceptance by men still conducting operations. Some breaks of the surrender happened with Japanese army and navy air forces attacking overflying bombers or reconnaissance missions. The US also completed some post cease fire operations, but mainly because the cease fire was received too late or while the attack was actually under way.

The lot of prisoners of war is covered, with many of them unaware the war had ended until humanitarian supplies had been dropped to them. Many of them were also unaware of how lucky they were that the Japanese army never carried out the execution messages and orders they received. Nevertheless, some executions were carried out in revenge for the surrender.

The book then considers the liberation of British colonial possessions and how at times the British required the co-operation of the Japanese occupiers to maintain order until enough commonwealth troops could be mustered. It then moves on to the organisation of the surrender ceremony in Tokyo bay which must have been the highlight of General Douglas MacArthur's life.

Finally the hopes and logistics of demobilising all the forces involved is covered. The return of the Japanese armies in China, Operation Magic Carpet to return US servicemen to the US and how expectations can turn disciplined soldiers and sailors into mutineers if their expectations are not met. The circumstances which led to war five years later in Korea are also covered.

The book is well laid out into seven large chapters, split into manageable sub-chapters, and is well written, apparently for British readers, with little in the way of American spelling and grammar. It has a black and white photo section, mainly of personalities. I found it a good, informative, at times eye opening read, and a reminder of how awful the war against Japan was. While a review should try and be neutral, it reinforces my belief that without the atomic bombs, the war would have got much worse with huge casualties. Therefore the Japanese had it coming.

Wind, whirlwind etc etc...
The stopped clock of The Belfast Telegraph seems to indicate the
time
Of the explosion - or was that last week's? Difficult to keep
track:
Everything's a bit askew, like the twisted pickets of the
security gate, the wreaths,
That approximate the spot where I'm told the night patrol
went through.