Whatever happened to natural selection ?

Flight said:
There was an overwhelming 'scientific' consensus about the role of witches in changing the weather too. It is, and remains, a fundamentally religious based belief.

Though poor breeding and the lack of natural selection, as there is no longer any infant mortality of note in the western world, probably plays a part here.too. Genetic mutations build up remarkably quickly over a few generations until you have entire classes of society hysterically shrieking that mutant rights are human rights.

Just look at your St Greta... Either very poor genetics, fetal alcohol syndrome, or most likely both. Rather than pojnting to abusive parents however the cucks and weirdos pronounce her a prophet and take every word from a 12 year old as the gospel.

Mutant people believe mutant things and it is likely a fatal flaw in democracy that their views have to taken seriously.
Click to expand...

Back when the science really was settled, and sacrificing a virgin to the gods would see a bountiful harvest next year

There's not many virgins about now so they'd have to burn Greta or Bugsy
Join me at Torn-City - MMRPG , meet interesting people and put them in hospital, so join up here: https://www.torn.com/2322286

lokiuk said:
Back when the science really was settled, and sacrificing a virgin to the gods would see a bountiful harvest next year

There's not many virgins about now so they'd have to burn Greta or Bugsy
Click to expand...

Bugsy.... Bejesus no... The God's will be pissed right off if you do that

At the rate I'm going the odds lie in my favour
Click to expand...

The funeral was rather amusing.
His wife.
The woman he was dancing with, when his heart gave out
And just for fun
"A very close personal friend"
It is in truth not for glory, nor riches, nor honours that we are fighting, but for freedom -- for that alone, which no honest man gives up,
As true today as in 1320.

Old Stab said:
I'll have a look for that.
Click to expand... 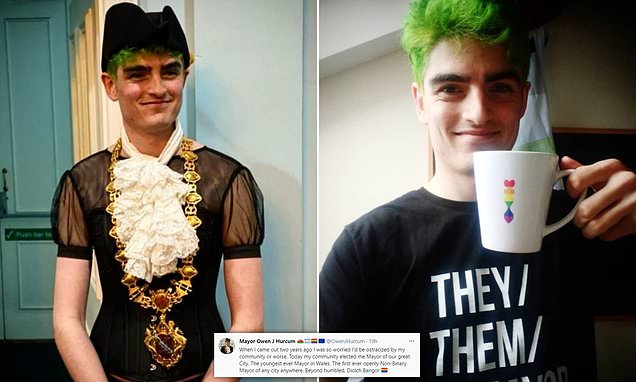 Bangor University graduate Owen J Hurcum came out as non-binary two years ago and feared they'd be 'ostracised or worse' in the north Wales city. However, this week, they were elected mayor.

www.dailymail.co.uk
Earthworms are easier to sharpen if you freeze them first.

“Spontaneity is one of the joys of existence, especially if you prepare for it in advance.”
― Alan Dean Foster
B

Flight said:
I suspect them merely threatening to reduce her funding would have sufficed.
Click to expand...

The Chinese are perfectly aware of our "culture wars"

Morning @AlienFTM,
String?
Thanks anyway but don't think I'll ever get my head around this elastrickery stuff

Ryder02 said:
Weather is not climate.

Science is not magical thinking.

You note that I gave reasonable citations. Want to give it a try?

Feel free to step away from your IT implement as you obviously distrust the relativistic science upon which it relies to maintain the UTC for its communication functions.
Click to expand...

Climate encompasses the notion of changing weather. Climate change is not... Unless the weather change is completely unprecedented. You clearly misunderstand the term climate.

You are not talking about science, unless you believe we can predict the weather 100 years in advance. This is indeed magical or religious thinking.

The citations I offer are the fundamental religious beliefs of every religion that has ever existed. The question for you is how you think your 'opinions' are a break with this long and proud tradition. If your mantra is that all religions think they can predict or control the weather, but that my experience is not religious because... reasons...

Then you are merely kidding yourself.

And I say this as a non-religious and somewhat autistic computer scientist.
--
"I believe that pipe smoking contributes to a somewhat calm and objective judgement in all human affairs."
-Albert Einstein, 1950
Red Pilled Feb 2018

Whatever happened to our seaside?
7 8 9