Moderator
Kit Reviewer
Book Reviewer
Monty's Map Caravan was the only vehicle purpose built for him and presented in April 1944, just seven weeks before D-Day! 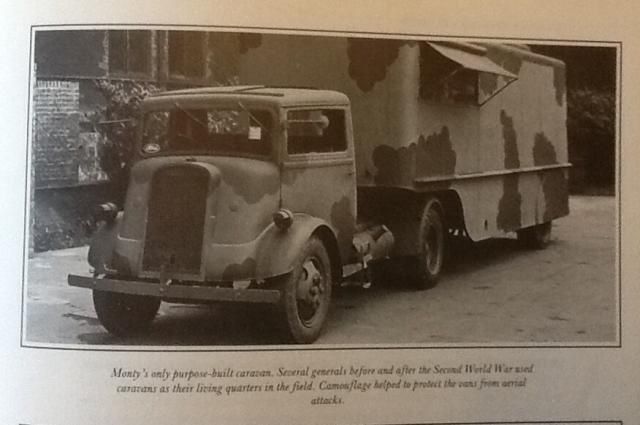 I've written about Wespe Models in the last and my view on their kits remains unchanged. The kits are average with very little detail, but serve as an excellent vehicle for the modelled to use his skills. Monty's Map Caravan is a dull, uninspiring piece of resin which, with careful research and presentation can become a museum grade exhibit! To make the caravan in the first instance requires the purchase of two kits from Wespe, 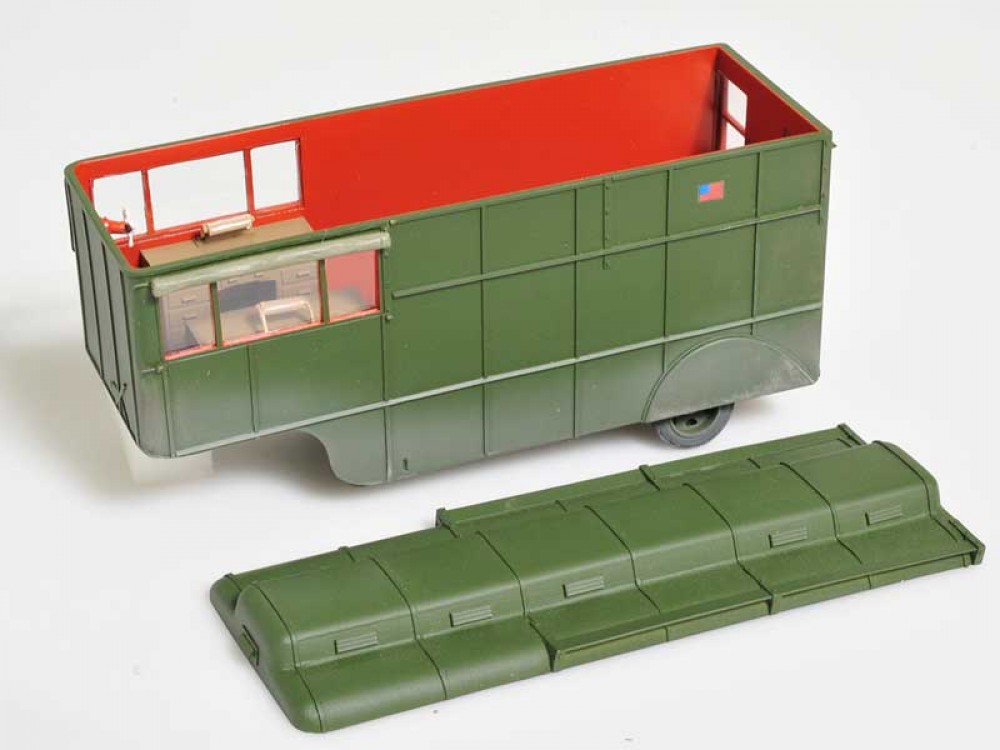 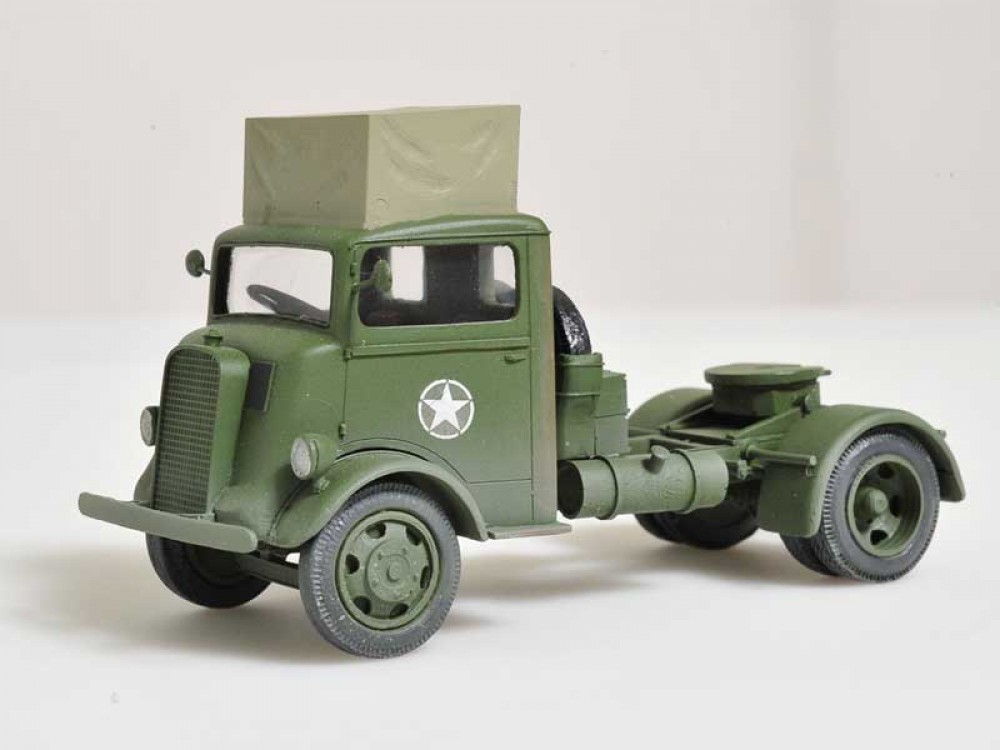 The Caravan costs about £55.00, while the Tractor Unit retails at about £30.00. Considering the lack of detail, poor instructions and no colour scheme or decals, I think this is a bit of a piss take. The Caravan insides feature two desks with relief carved drawers, a couple of map cases, a map cabinet plus two desk lights. There is also a large number of ceiling lights to paint and install. What here isn't, are maps. Not a one! A little bit of clever research will find any number of military manoeuvre type maps, I managed to find about half a dozen that can be used to paper the walls with! The IWM site has a number of photos of the inside of the map caravan and these give an indication of what would be required.

I think I have said elsewhere that Wespe seem to go overboard with the amount of resin they use. The Caravan walls are up to 5mm thick in places and will require some serious sanding. Th tyres are another area that Wespe cannot seem to get right. It seems like they mould a long tube of vaguely patterned resin and then just slide it up for each kit. 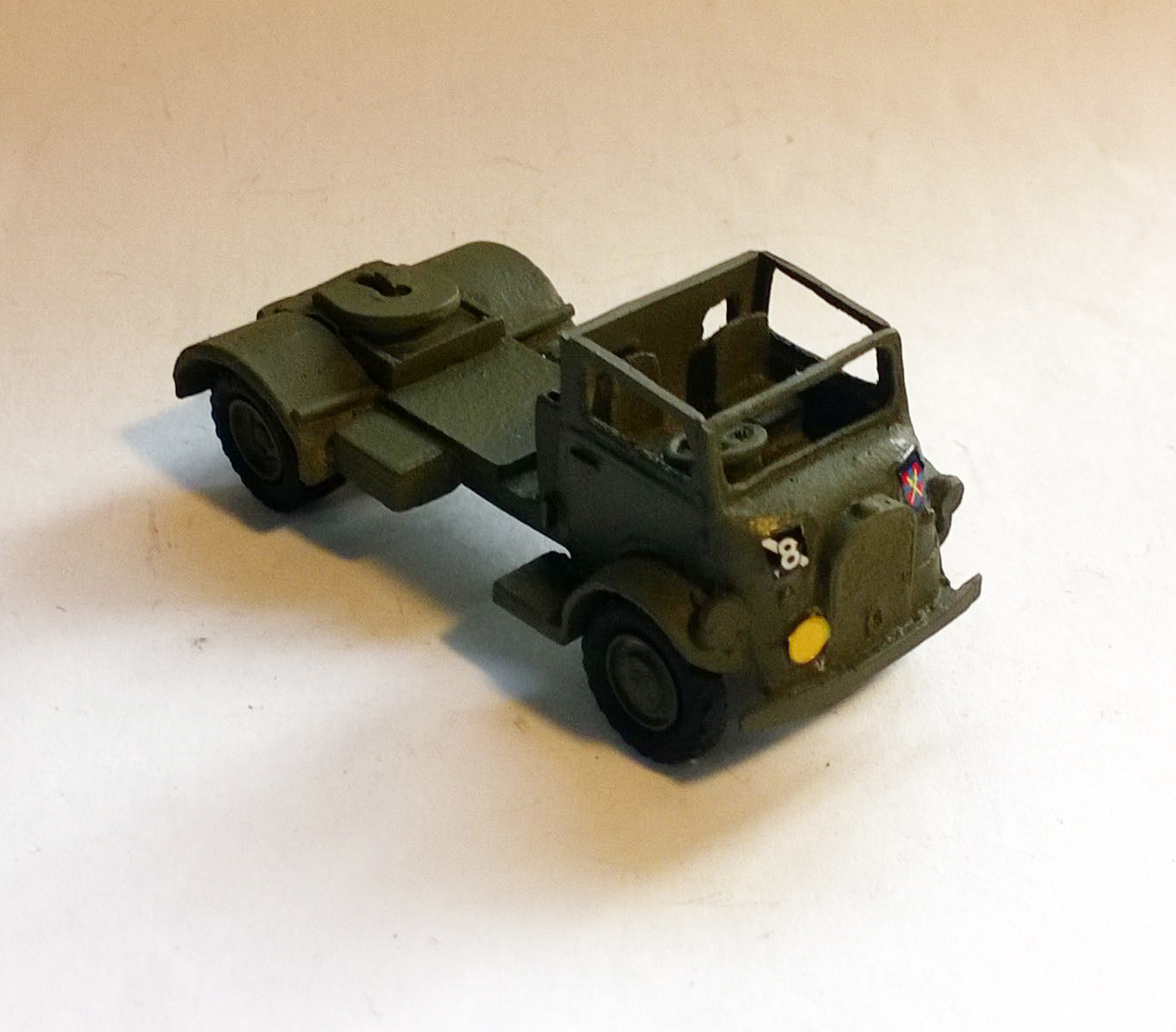 A good image of unit markings on the Tractor 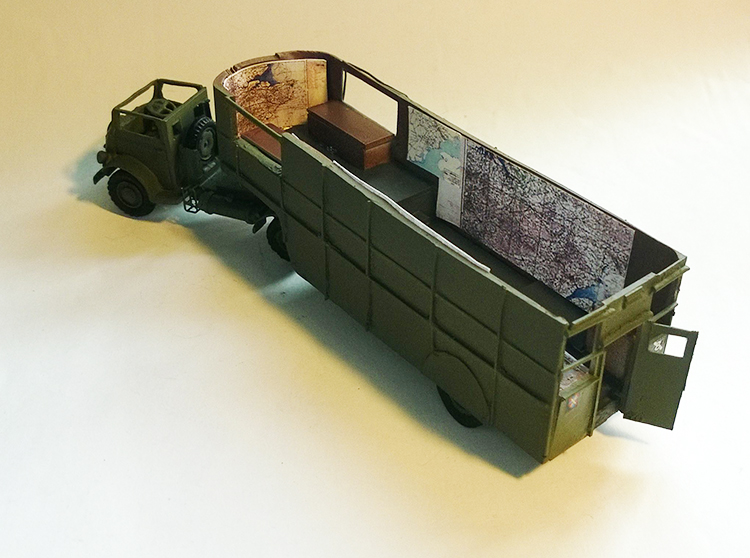 And the same for the Caravan...

So far, I've sprayed all parts with Auto primer and have been detailing the two desks. I have got an idea about wiring up the caravan so that it could be photographed either illuminated or in the dark. The photos of the real desks show them to be of either Oak or Teak. This won't be too hard to replicate as I have both varieties available in sticky backed plastic! I really think Wespe could have included a couple of chairs in this kit, especially for what it cost.

I've also spent some time finessing the decals for my collection of Monty's Caravans and think I now have some pretty accurate versions ready for when I finish (if ever) the three models. I'll leave you with a picture of the man himself, lecturing King George VI in the map caravan. 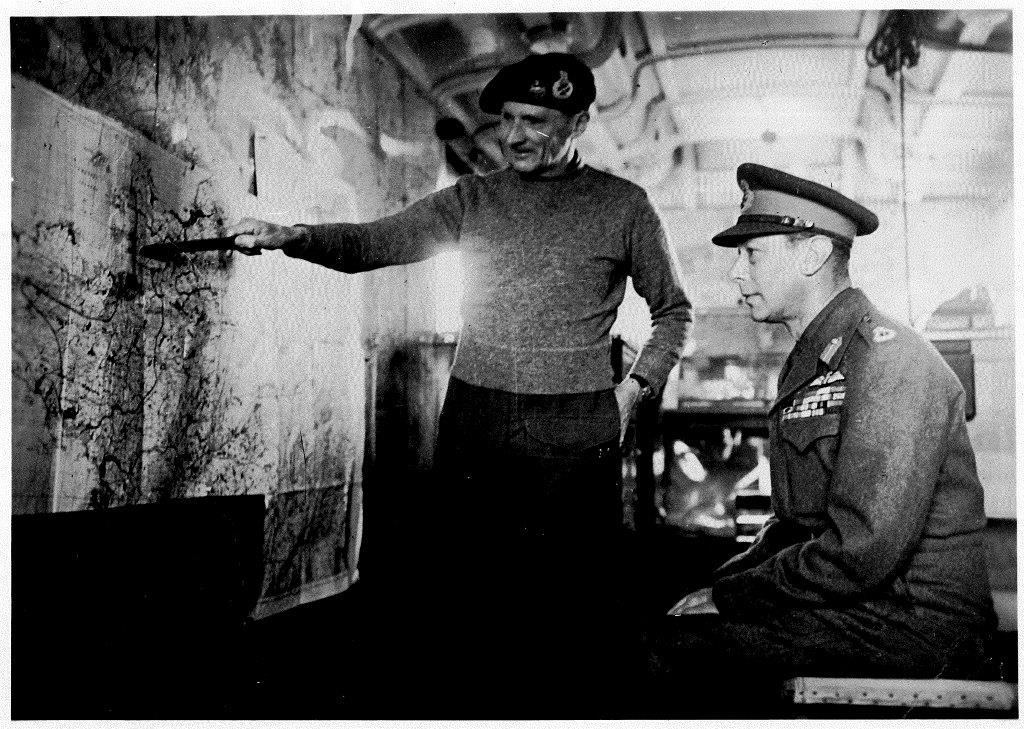 wouldn't you like to be a fly on the wall in that last shot. Nice model choice, despite the cost and lack of additions in the kit.
thank you Gentleman, thank you

Moderator
Kit Reviewer
Book Reviewer
Been busy this evening on the Fordson Tractor Unit. One thing you have to remember with Wespe kits, check everything! I laid everything out this evening, and contrary to Wespe's advertising hype, the kits are not ready to build! There appears to be flash along most of the mould lines and plenty of pin holes. Two of the spring sets are twisted and the drive shaft is badly distorted. 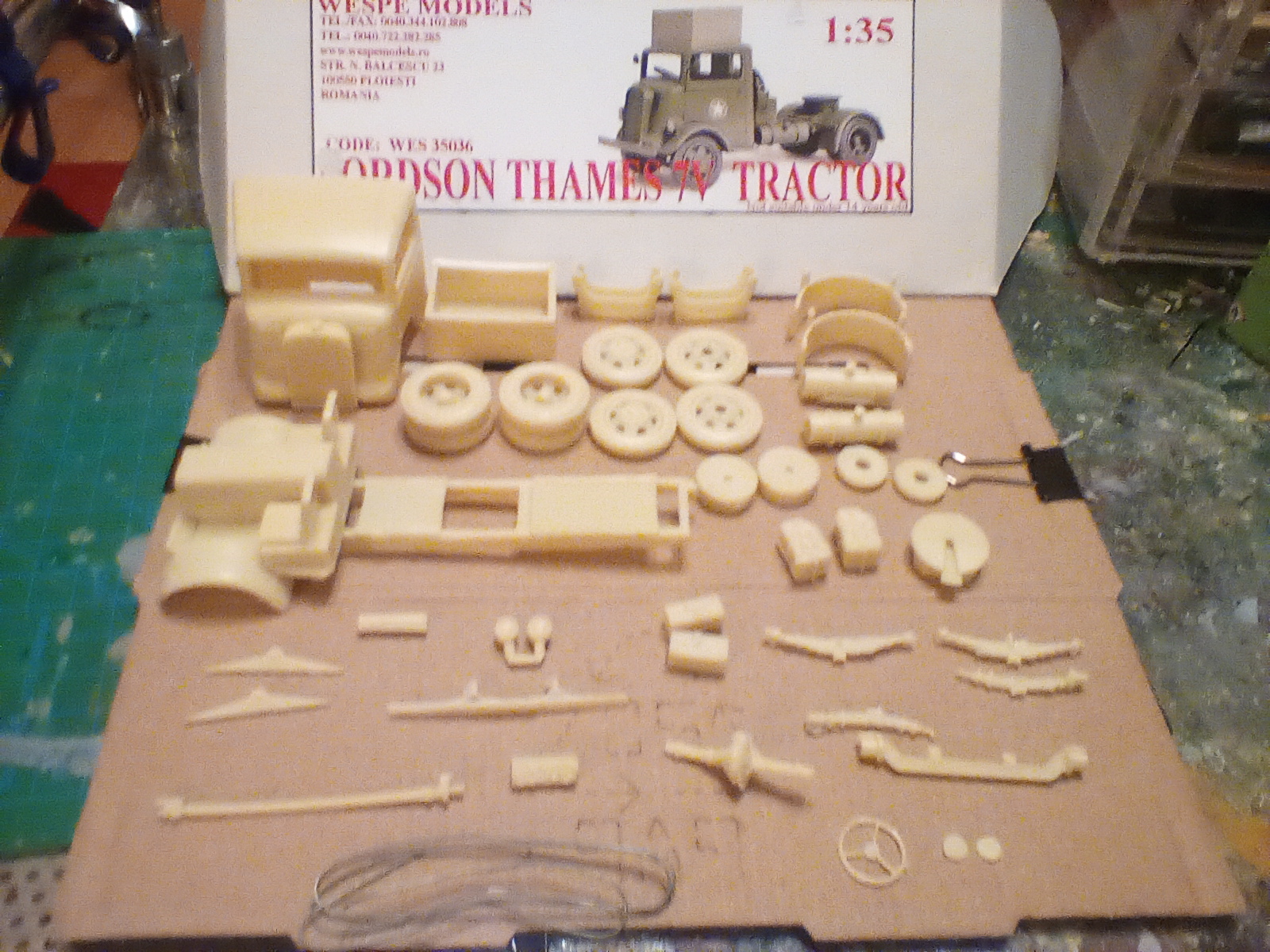 The kit component parts after cleaning and corrective surgery!

Putting it right. First all parts were washed in mild detergent and dried thoroughly. The spring sets were immersed in warm water which was gradually heated to just short of boiling. They were then placed under a suitable weight; a mark one, London Red, housebrick; and left to cool. The dive shaft was inserted into a a thin copper tube and then, like the springs, immersed in water and brought up to 98°F. Once the tube had cooled enough for me to handle it, I taped the shaft to a metal skewer and brought it back to the boil I have found this to be one of the better ways to straighten out distorted resin parts.
Wespe provide a silencer box for the tractor, but recommend using wire for the exhaust. Instead of wire, I chose to use 1mm plastic tube from Plastruct. I drilled out the silencer using a 1.25mm drill bit and pushed the for through the silencer. Having made a scale drawing of the exhaust from Mike Conniford's excellent series of military truck books, I marked where the bends (2) were to be placed. Bend one was down to the manifold and was a straight forward 90° bend. The second bend was from the silencer out to just before the nearside rear suspension and was a double 40° bend up and to the left. Both bends were made by holding the rod over a candle and adjusting the for until in the correct position.
I 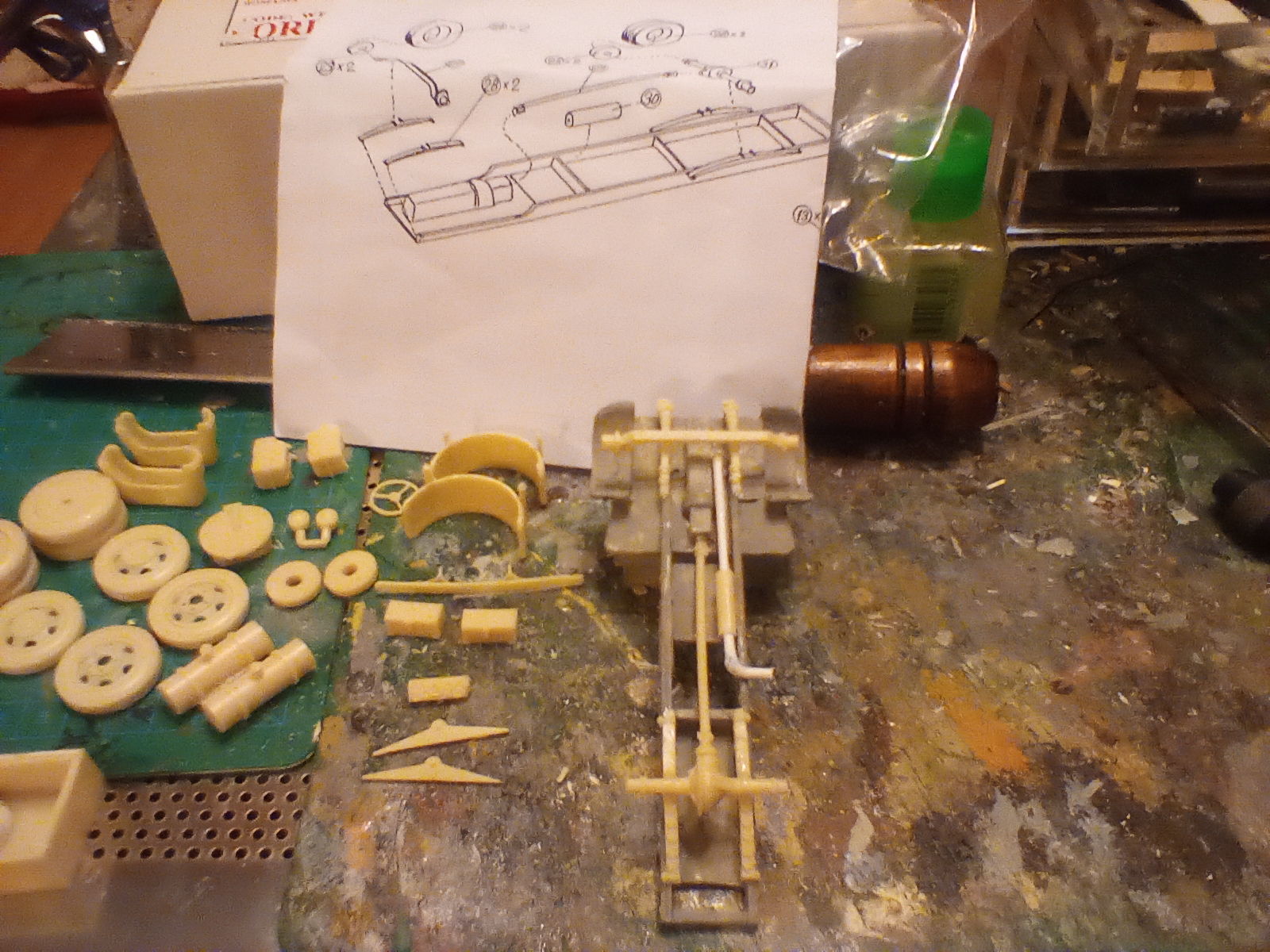 Underside of the Tractor showing the modified exhaust in white

Fitting the rear wheels was easy enough, but a problem occurred when it came to the front pair. First up, I had decided to use the kit supplied wheels even though they were only any good for the spares bin. As I said, the rear wheels went on easily enough. The front wheels required drilling out the mounting holes by another 0.5mm. That sounds easy enough, but when you only have 0.7mm depth to play with, the odds are against you. I managed to drill right through the first wheel, so I figured, why not do the same with number two. I did and at least it looks right. I'll chuck a bit of milliput in the holes tonight and file the to shape tomorrow.

Just so you know how crap the instructions are for Wespe kits, take a glance at those for this kit. 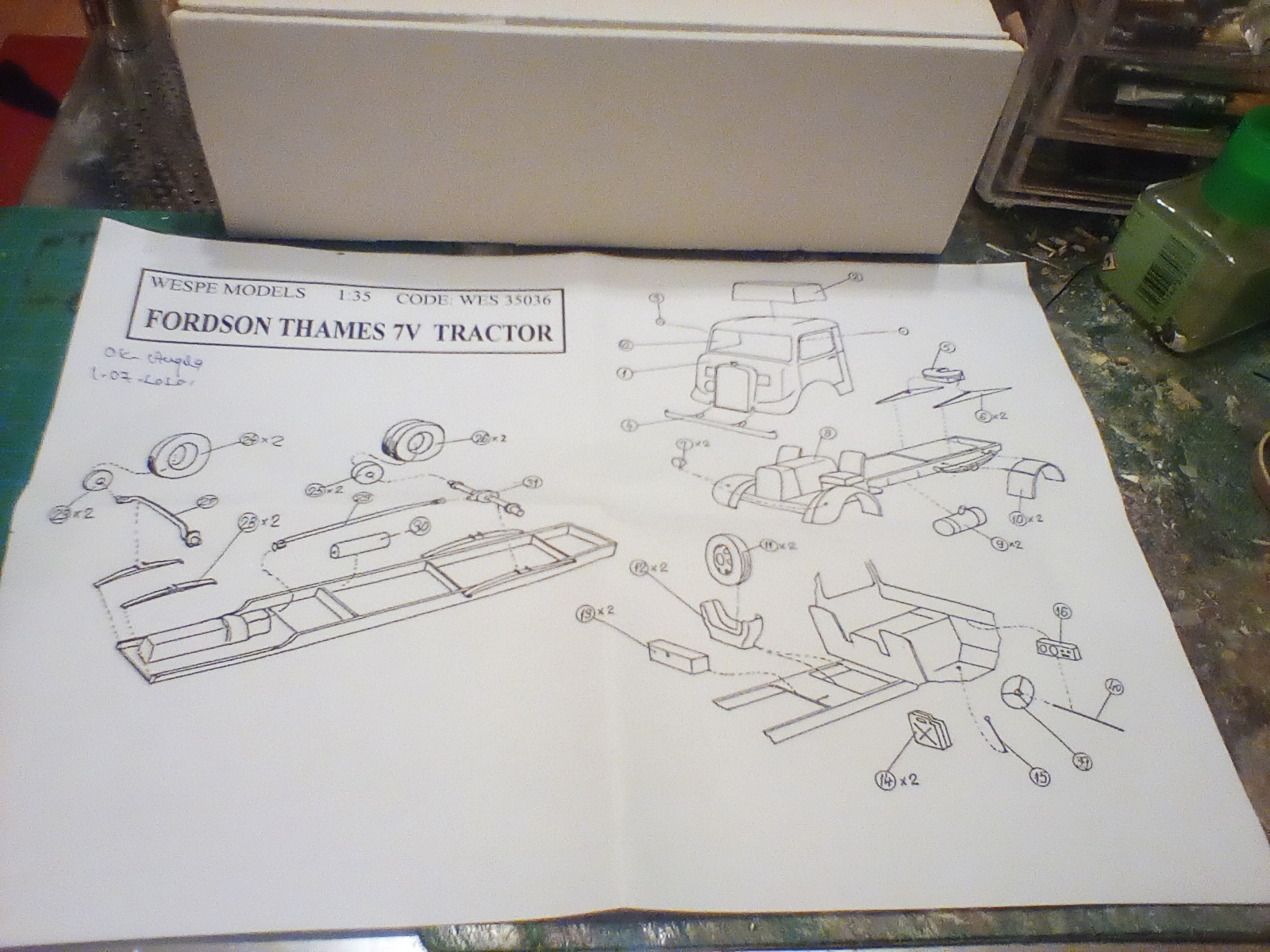 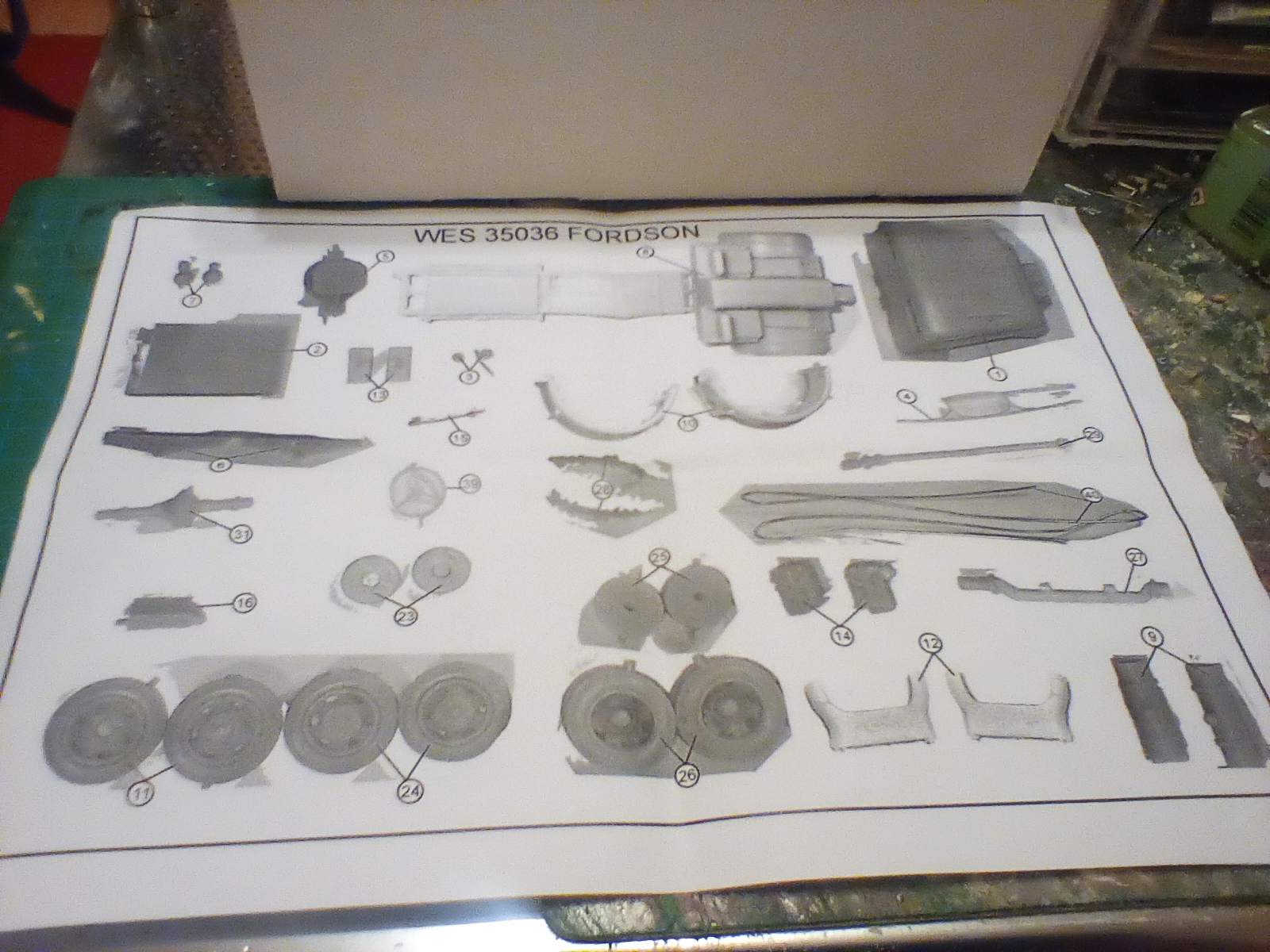 Not what you would call the most explicit of instructions!

Moderator
Kit Reviewer
Book Reviewer
(Although the above post was written out yesterday (29/9/20), some silly arse (me) forgot to post it until tonight) 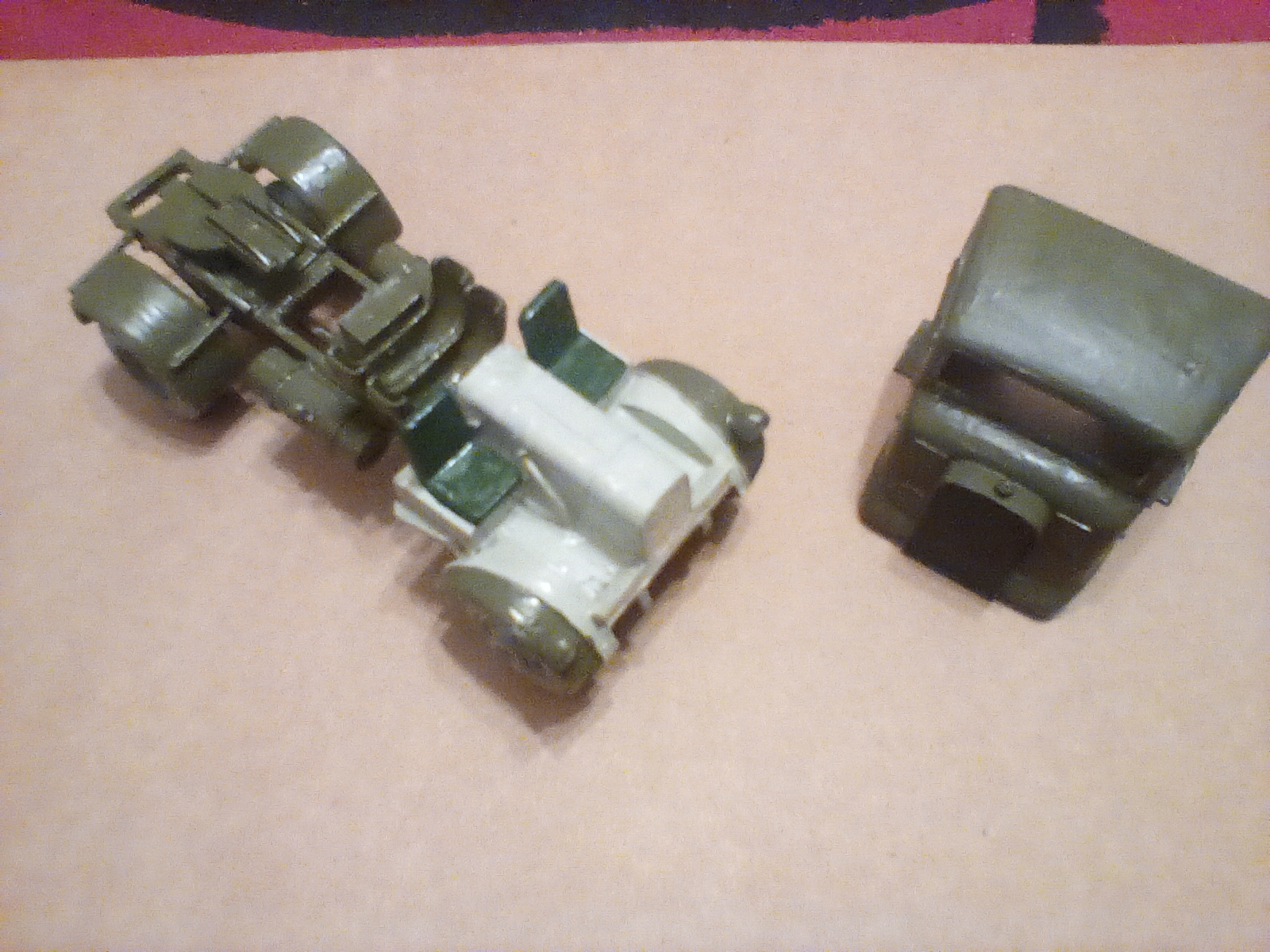 After cleaning both fuel tanks (again, more flash), they were installed correctly. At this stage, all assembled parts were sprayed with grey auto primer and left to dry. The cab interior was painted in Vallejo Deck Tan, which is more off-white than tan! This also included the one piece cab shell. Once the chassis parts were dry, they were sprayed in Vallejo US Olive Drab. The cab exterior was also painted in the Olive Drab. To give an impression of the green "Rexine" seats, I hand-painted the seats in Vallejo Luftwaffe Camouflage Green as this was the nearest to the green coloured seats in the photos I have from IWM. Once completely dried, I will stipple a coat of satin varnish on both seats. 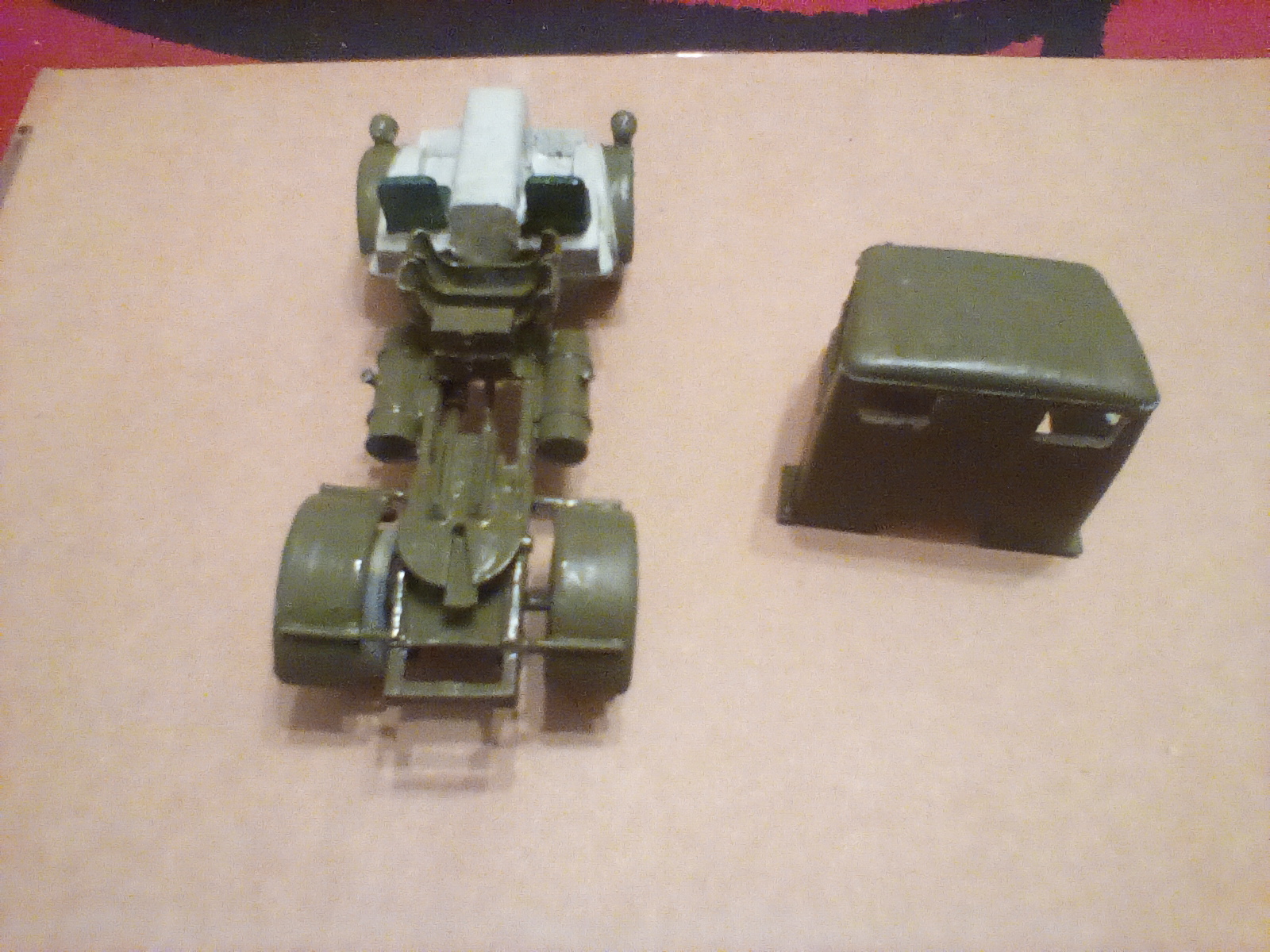 The fifth wheel towing hitch is a completely different design to those we are used to today. It does however, require four hands to hold the wheel to the mounts while trying to glue it to the chassis! In the end, I have glued it all together but in such a way that I can attach the trailer to it. That was enough for tonight.

Smeggers out.
RIP Sluggy - The Queen of Arrse, Unicorns and Fluffy things.