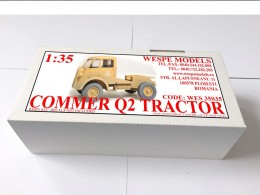 Wespe Models is a Rumanian company that produces original and little-known model cars and trucks and strives to come up with a wide variety of identical models of those cars and trucks. Using mostly resin as its raw material, they produce complete model car kits, or painted and assembled model cars in a variety of scales and in both civilian and military format. All kits are offered RTF (ready to fit). This means that all pieces are (allegedly) cleaned from production flash and sink holes.
Commer's successful Q2 2-ton 4x2 Tractor first entered service in 1939, mainly with the RAF and a small number with the Royal Navy. Hundreds were built with the main purpose being to tow the Taskers Queen Mary Aircraft Recovery Trailer and various flatbed trailers. They were also used to tow mobile classrooms and signals office from airfield to airfield. The Taskers 33 ft trailer was the standard flatbed trailer in use by British forces during WW2.
The kit itself comes in a 12"x4"x4" white cardboard box with a logo-ed photograph on the top. All parts are moulded in a sort of flesh-coloured, glossy resin; wrapped in bubble wrap and held in a self-seal plastic bag. Pieces of sponge protect some of the smaller parts, but kit protection doesn't seem to be a concern to the manufacturer.
What I did find unusual, was the fact that most of the cab detail was already pre-assembled! This was bloody annoying as it made cleaning, priming and painting the cab interior very difficult. Also, I felt the manufacturer was letting the modeller down by doing half the work for him.
The kit is relatively flash free, but there are some mould lines on some of the more delicate areas which will need some careful attention with a scalpel. Be warned, Wespe do tend to strengthen delicate parts with copper wire, so don't go using your best cutters when removing from moulding blocks. There does seem to be one or two annoying sink holes in the tyres. I found the best remedy was to mould new ones using a two-part resin system.
The instructions are very basic, consisting of crude line drawings with numbered parts. Do not try to assemble in numerical order or you will find you cannot attach the rear axle. There are one or two grainy, black and white photographs, but there is no reference as to where they go or to what part they belong.
There are no decals supplied with the kit. This again, is bloody annoying. Considering the kit costs around fifty quid, you would think they would throw in a bookful. A quick check of fleabay, and some relevant decals were soon winging their way to Casa-Smeg. There is also no paint detailing for the model. The Q2 has never been a favourite of the modelling fraternity, so paint jobs were hard to source. I eventually decided on an overall blue/grey to match the RAF markings. Just to make my day, there was no driver figure either!
Conclusion:
The kit is expensive for a company who produce kits for entry-level resin modellers and who are effectively, at the lower end of the scale when it comes to producing resin kits. There appears to be no effort made towards marketing the model, everything just appears very basic.
With a lot of extra effort, this could be an excellent, but unusual kit. However, after shelling out fifty quid, you are going to have to add another twenty to twenty-five quid to improve it.
Rating: 1 out of 5 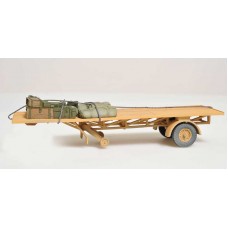