A review by @metellus cimber II . Again, apologies for the delay in loading, I've been 'under the weather'.


This is a fascinating, well-written and well-illustrated book about a period of Japanese history about which the average Western reader knows little. That is, unless he/she is an afficionado of the spectacular historical films of Kurosawa, which take place during this period. I refer in particular to The Seven Samurai (which inspired The Magnificent Seven), Ikira, Ran (also known as Chaos), Throne of Blood (Cobweb Castle) and especially Kagemusha (The Shade of the Warrior). The era of 1467 – 1615 is known as the Age of Warring States. It started with the tragic Onin War of 1467, during which large areas of the imperial capital, Kyoto, were burned down; temples, mansions and ordinary houses were looted and destroyed. Japan then plunged into a civil war which lasted for half a century. It was the Japanese equivalent of the Wars of the Roses. 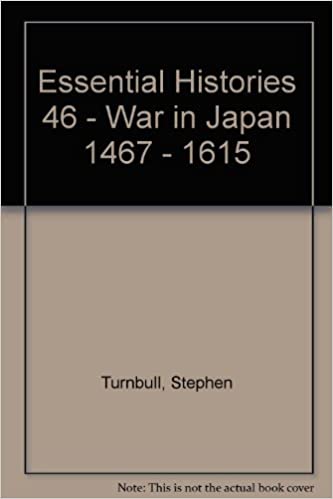 What caused this? Although some foreign mercenaries were involved, there was no external threat at that time. Japan was at peace with its neighbours, including Ming China. The root cause was the collapse of the Shogunate (hereditary military Prime Ministership) due to weak leadership. The Shugo, provincial prefects appointed by the Shogun, began to take possession of the provinces where they were installed. They became known as daimyo ('great names', best translated as 'warlords') and started to behave almost like independent sovereigns. This, in feudal Japan, meant making war against their neighbours with a view to expanding their power bases and eventually becoming Shogun. The war convulsed Japan and spread to the nearby Ryukyu Islands, with expeditions to Korea, Taiwan and Okinawa. The conflicts were far more widely spread than has hitherto been realised and were pursued with a savagery that Kurosawa reproduces accurately in his films. In one fight in the summer of 1467 eight cartloads of severed heads were taken as trophies. There was European involvement, but this was mainly in the form of lucrative contracts to supply the daimyo with up-to-date firearms. However many samurai (Literally 'servants'; the warriors of the daimyo) preferred to fight with traditional weapons.

Eventually the Shogunate was re-established and from 1603 the Tokugawa dynasty did their successful best to ensure that no further civil wars should take place. Japan was closed to outside influence; even contact with China was discouraged. In 1621 foreign travel was banned and in 1639 the Portuguese and other European were expelled. Many Japanese had converted to non-indigenous Christianity; they were now persecuted, especially after the Shimabara Rebellion of Christian peasants of 1637-8. Japan remained closed until 1854 when an American fleet arrived.

And what of the Emperor? The prize of the daimyos' dynastic struggles was the Shogunate, not the throne. Throughout the entire period, the imperial court continued its ceremonious and cultured existence in the background, while all the warlords claimed to be acting in the Emperor's interest. The few European visitors to Japan under the Tokugawa were either unaware of the Emperor's existence or thought that he was the 'pope' of Japan, while the Shogun must be the king. That was not a bad description, given that the Emperor was the head of the State Shinto religion. Not until the Meiji restoration of the 1860s would the imperial family resume an important role in Japanese politics.

The author, Stephen Turnbull, is recognised as one of the world's leading English-language authorities on Japanese history, especially the samurai. He has degrees from Cambridge and Leeds Universities, has written 85 books and is working on another, on the Hojo daimyo of the sixteenth century. War in Japan 1467 – 1615 is copiously illustrated by modern photographs and beautiful traditional paintings.

Moderator
Kit Reviewer
Excellent review there. I've tried to fathom the Japanese "shogunate" for many years and it's part in the many civil wars for which Japan became famous for. I wasn't aware that Japan had closed its borders in the 17th century but it smacks of the economic closure on foreign imports practised today. Japan can export as much as it wants but foreign imports have such high duty tariffs placed upon them, it is almost prohibitive to trade with them.
Your review has certainly whet my appetite for more information from those troubled times.
They say I'm wild n I'm reckless I should be acting my age
I'm an impressionable child in a tumultuous world they say I'm at a difficult stage
It seems to me to the contrary of all the crap they're gonna put on the page
that a wasted youth is better by far than a wise and productive old age Meatloaf

Smeggers said:
Excellent review there. I've tried to fathom the Japanese "shogunate" for many years and it's part in the many civil wars for which Japan became famous for. I wasn't aware that Japan had closed its borders in the 17th century but it smacks of the economic closure on foreign imports practised today. Japan can export as much as it wants but foreign imports have such high duty tariffs placed upon them, it is almost prohibitive to trade with them.
Your review has certainly whet my appetite for more information from those troubled times.
Click to expand...

@metellus cimber II well done!
And this you can see is the bolt. The purpose of this
Is to open the breech, as you see. We can slide it
Rapidly backwards and forwards: we call this
Easing the spring. And rapidly backwards and forwards
The early bees are assaulting and fumbling the flowers:
They call it easing the Spring.
They call it easing the Spring: it is perfectly easy
If you have any strength in your thumb: like the bolt,
And the breech, and the cocking-piece, and the point of balance,
Which in our case we have not got; and the almond-blossom
Silent in all of the gardens and the bees going backwards and forwards,
For today we have naming of parts.

In the Shadow of Death by Idris James BARWICK