Here are the five boats currently within the 200 nm radius.

APIVIA has moved away from the finish line as it's low tide. The plan was for the first five to sail in procession to the harbour with a band playing in the early hours of the morning.

Here is the VG announcement about Boris' collision: 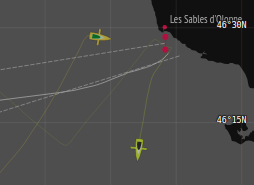 bobthebuilder said:
The short term need to compensate for the sea’s motion goes quite quickly.

The surfing sensation is a weird one. It doesn’t happen continuously; a couple of weeks after a long race and you’re sit quietly at your desk. It starts surfing. Get up and it goes.
Click to expand...

Don't know about surfing in the boat but climbing the stairs after having been on a boat is a good one. 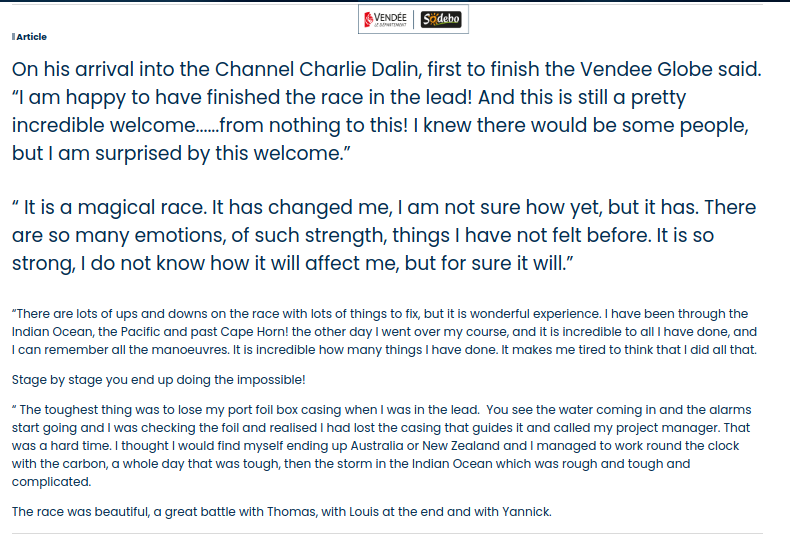 Sea Wolves Live coverage started 4 hours ago and lasted 30 minutes. Here is think for those interested in his coverage of Charlie Dalin arriving but I would suggest having the official feed on as primary source with great video from the official cameras.

An excellent performance by Burton who overcame many problems to stay in the race.
80 days 10 hours 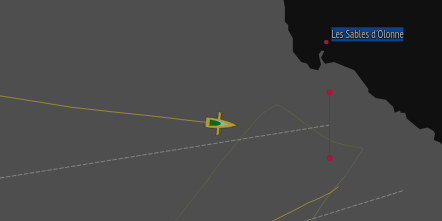 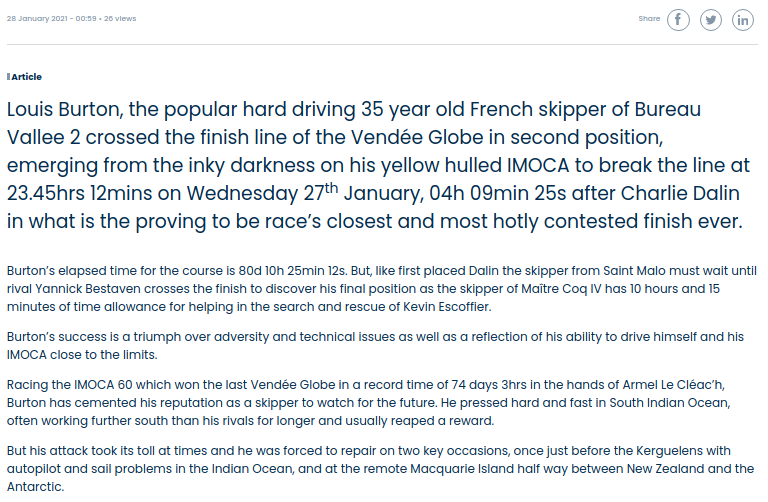 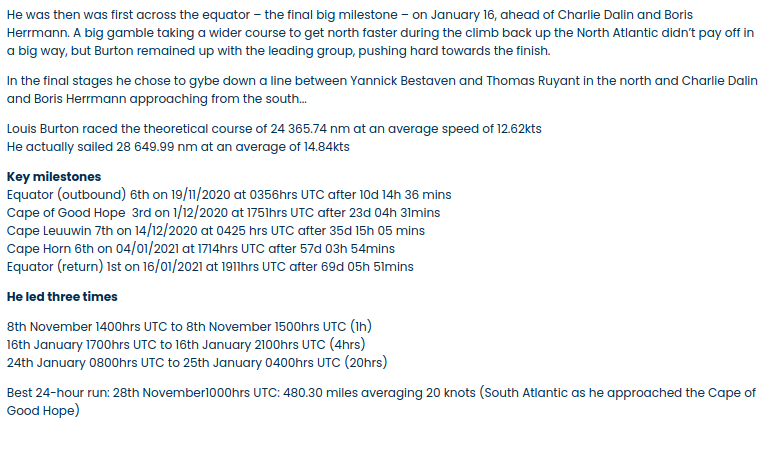 Electromagnetic said:
Don't know about surfing in the boat but climbing the stairs after having been on a boat is a good one.
Click to expand...

The surfing thing happens to me quickly now. Used to only get it after a few days at sea. Did a short offshore last week; start midday, out through the heads, a couple of circuits of a laid windward leeward, back up that harbour to finish in about 3 hours.

Table in the CYCA was surfing before I cracked my first non-alcoholic beer.

bobthebuilder said:
The surfing thing happens to me quickly now. Used to only get it after a few days at sea. Did a short offshore last week; start midday, out through the heads, a couple of circuits of a laid windward leeward, back up that harbour to finish in about 3 hours.

Table in the CYCA was surfing before I cracked my first non-alcoholic beer.
Click to expand...

"out through the heads"

Yannick Bestaven appears to be ahead of Thomas Ruyant and likely to take the third place over the line that was previously predicted by VG and others for Boris Herrmann. His time allowance is likely to give him the race win. Giancarlo Pedote appears to have overtaken non-foiler Damien Seguin. Jean Le Cam and Benjamin Dutreux are going well but are quite a distance away. Jean's time allowance won't bring a podium place but he has won in other ways if not the race. He got a special mention in Sailor of The Decade which went to Frank Cammas and was awarded a Solidarity prize. Himself and Damien will be the first and second non foilers to cross the line, both in the top ten, which has been dominated by foiled boats. 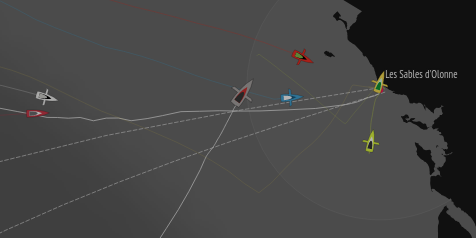 Charlie as the first across the line attended a press conference and handled it very well. There may be a translation at some point. The conference is now being replayed with a human translator narrating in English.
His descriptions are detailed and informative. As a boat architect the experience has obviously given him a lot to think about, such as being unable to fully use the foiling potential. Several times he eased off to preserve the boat.
Last edited: 28 Jan 2021

The yellow boat is APIVIA with Charlie Dalin's team aboard. Sorry no video of Yannick's arrival yet. The Live broadcast doesn't start until 04:30 and I'm not staying up that late. 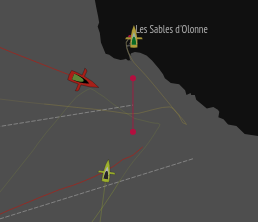 He had heat for his food for 15 days and so used cans. He had no working water maker for a month and survived on rain water from the Doldrums!!! He describes a design flaw with the autopilot network which enables fail safe to back up but in another case takes both systems out.
Re his stop at Macquarrie Island to ascend the mast, he talks of a change from race to adventure. Some many problems. His story is going to be worth a read. 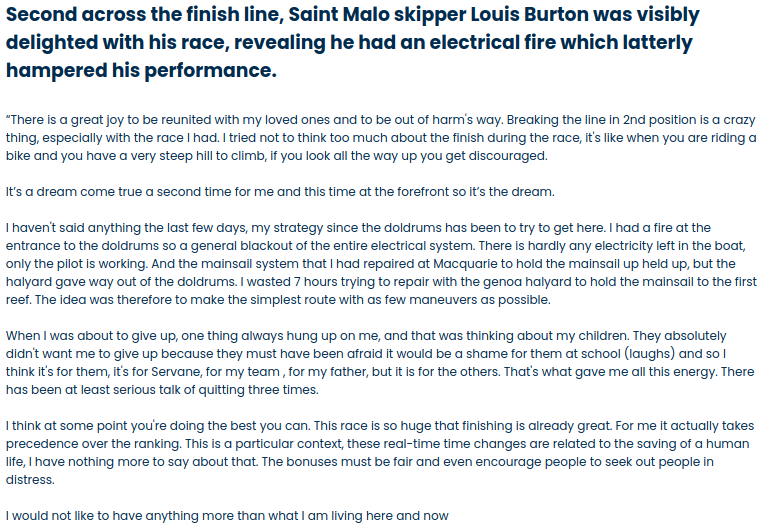 All his collision avoidance equipment, the Radar, AIS and OSCAR were working in the Bay of Biscay before this surprise collision. As he says, fishing boats sometimes turn off their AIS but why no alrm from the Radar or OSCAR? Lots of damage but the boat is viable and should arrive early afternoon Thursday.

Was it a French fishing boat that collided with German third place challenger Boris Hermann?

Yannick Bestaven arrived third over the line but his time allowance for time spent in the rescue of Kevin Escoffier was applied making him the overall winner. He has had a lot of frustration along the way but has been relentless in his determination.

Boris has been given provisional fourth place, pending Jean Le Cam's allowance time. The main thing is he is safe and sailed an excellent race. Shame about the yacht after he took so much care over it. The seas were more rough as he arrived. Next due in is Jean Le Cam tonight then Benjamin Dutreux on Friday morning. 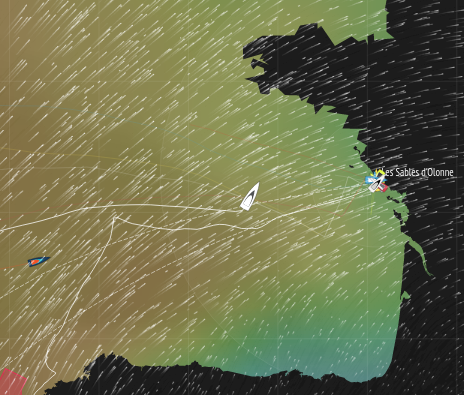 The race is still on between Maxime Sorel and Armel Tripon for tenth place. Maxime is doing really well in his non-foiling dagger boat. Here is the list of arrivals and race times so far, which is the top part of the VG rankings table but nice and convenient in this format compared to the spreadsheet: 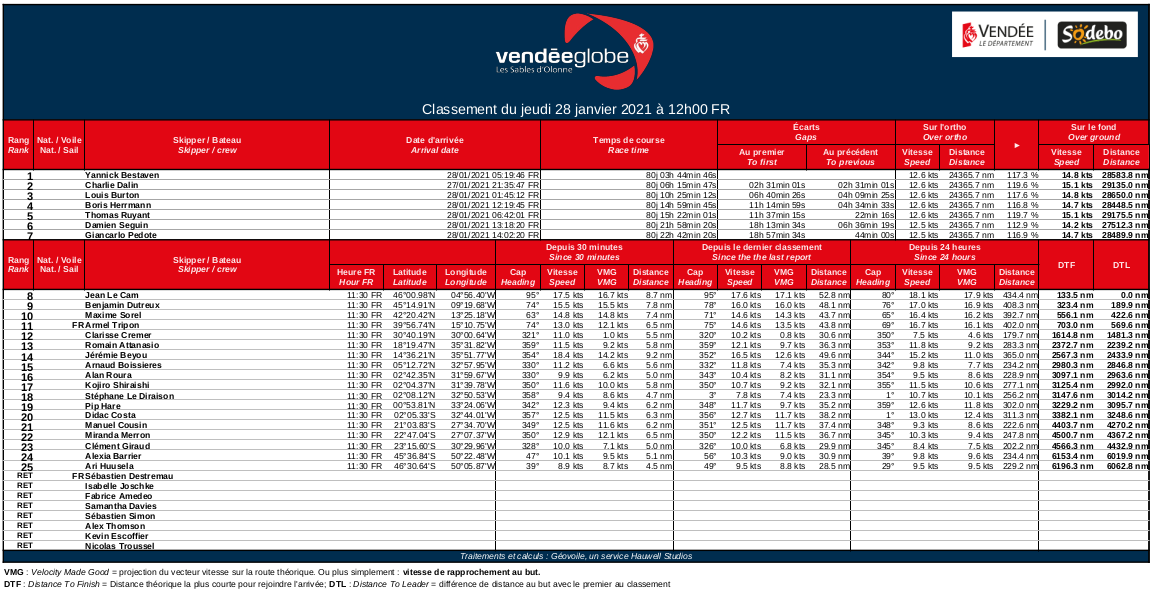 Pip Hare kept up with the excitement of the finish line via friends who were watching it live. 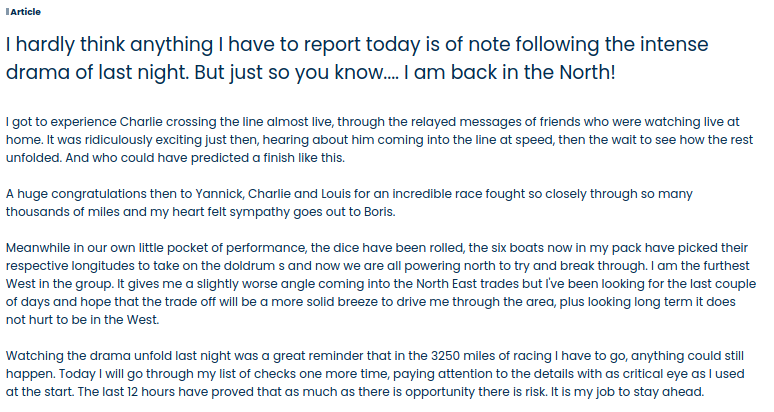 First Words from Bestaven, the New Vendee Globe Champion.....'There Are Two Winners On This Vendee Globe'​ 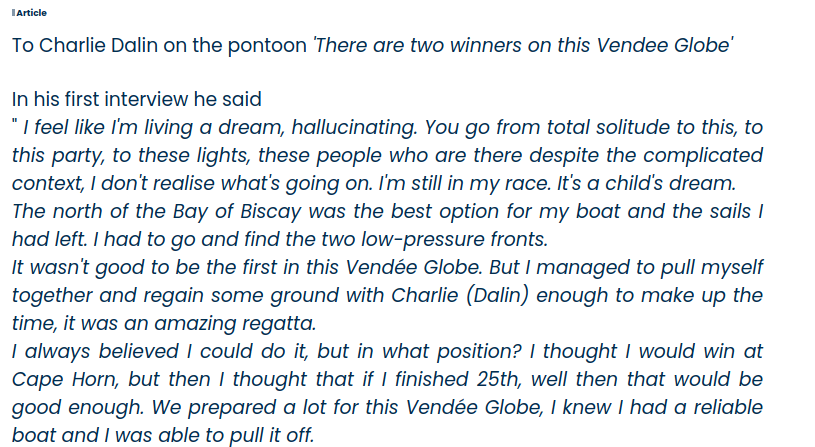 Vendee Finish (English) The video is in French with Andi Robertson translating and compering remotely for the English speaking audience.

Initially I thought he might arrive by 22:00 but I got that wrong. He will be earlier! The position must have been out of date, as all of a sudden he is just over an hour away!

The official live stream was excellent when it was eventually live. The translated replays of the press conferences were very good but with so many arrivals in 24 hours it got a bit chaotic trying to keep up between live feed / test card, replay with translation and trying to find live coverage of Yannick Bestaven arriving. I didn't bother with Sea Wolves live as so much was going on already and that seemed more of a virtual race celebration. I haven't had time to read all the articles myself but I'll try and link to some more footage and press conferences.

Lets have a look at the fleet first. It isn't over until the last boat is back. 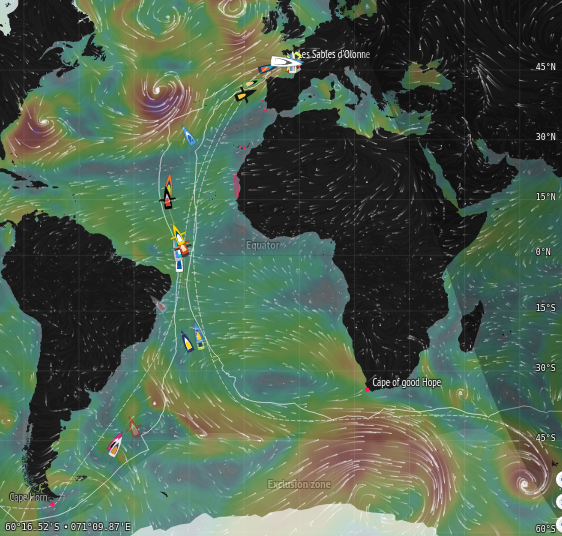 Jean Le Cam, Benjamin Dutreux and Maxime Sorel are going well. Armel Tripon has dramatically lost the pace. It could be that the wind overlay is putting wind where there is none or Armel may have problems. He had been looking like a contender for tenth place but has done very well indeed to move so far up the fleet after his problems at the start.

Clarisse Cremer is in the wind now and getting 12 kts. Romain Attanasio and Jeremie Beyou have yet to cross the wall of high pressure that Clarisse has left behind. Beyou's progression from the back has been impressive. The group behind him are still together. Koshiro Shiraishi has not been able to continue his progression through the pack and break away. He has limited sail choices and this may be hampering him in the limited winds he finds himself in.

Pip Hare seems to have been catching up. She is just 60 nm behind Stephane LeDiraison. She and Didac Costa have better VMG than the rest of that group at the moment. Hopefully Pip can capitalise on this. Her more westerly route seems to have the edge.

After long windless spells the trio of Manuel Cousin, Miranda Merron and Clement Giraud are back in double figure speeds but have a long way to go.

It looks like Sam Davies has found another useful patch of winds although the tracker says she is making under 8 kts. Alexia Barrier and Ari Huusela are around 45 nm apart. Ari has just under 6200 nm to sail. 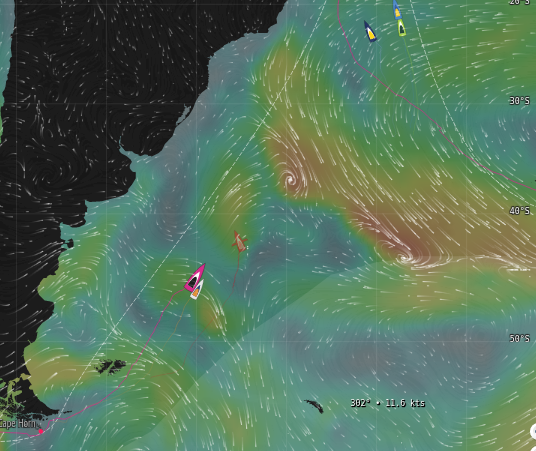 I had to do some digging to find Yannick's press conference, so here are the first five in one post. Two subsequent press conferences are ongoing or pending translation. A human translator provides the English. Enjoy.

Vendee Flash gives a useful summary of the arrivals so far, including Yannick's arrival to fireworks!
Link below. Andi says that Friday's Vendee Live will be a special one and probably their last for this 2020/21 race. However the reports, videos and other media will continue via the official website, YouTube and other sources.

Here comes Jean Le Cam. He is faster than they or I expected at 18.7 kts now and only 9.5 kts to go! This makes all the difference as to how high up the table he is placed and who he displaces when his time allowance is applied.

Don't ask me what they are doing with live coverage as it seemed to go to recorded coverage for Yannick onwards. I'm sure we will get some video of Jean's arrival at some point. ETA it seems that weather is the problem as it' quite rough out there now. 8.25 p.m. local time is 7.25 p.m

Slowing down a bit. Maybe they are too slow at the line and aren't ready for him ;-p 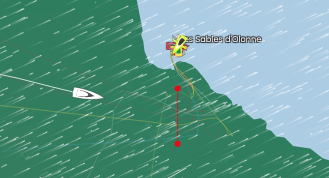 Apologies to those who can't see the video in tweet: 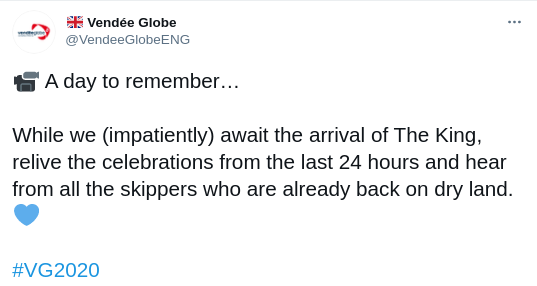 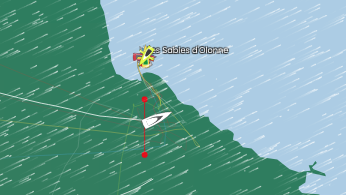 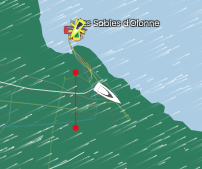 15 minutes in we have a video link with Jean. We can expect a translation later. Tide is falling to low so the boat may have to wait until the morning to get in to the harbour. This brings the question of how small teams deal with this. Presumably by staying aboard. Benjamin Dutreux will be next in 8 to 10 hours ie Friday morning. 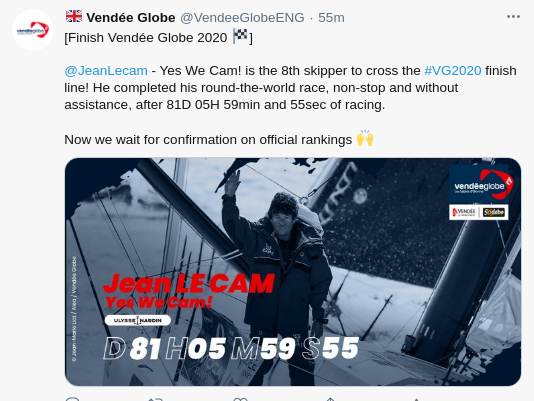 This article is a great read. 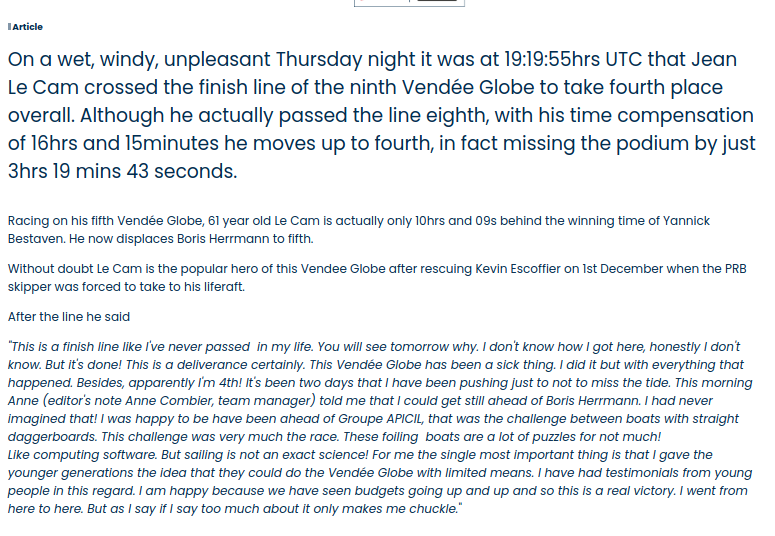 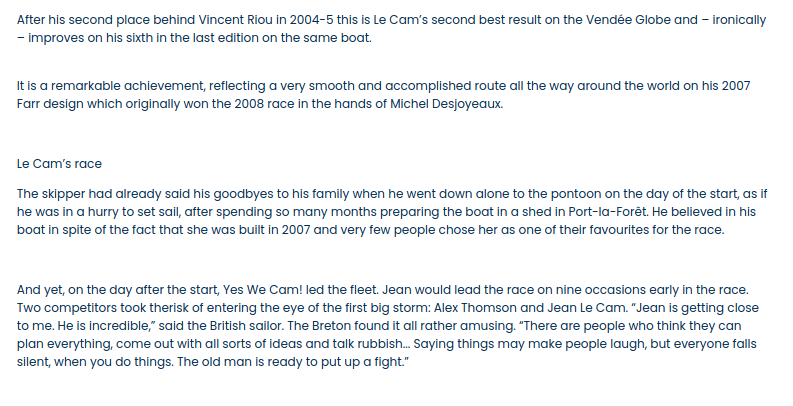 C
The Times: Cambridge college named after Churchill to debate his ‘backward’ views on race
2 3