SOUTH CHINA SEA (NNS) -- The guided-missile destroyer USS John S. McCain (DDG 56) was involved in a collision with the merchant vessel Alnic MC while underway east of Singapore and the Strait of Malacca, Aug. 21.

The collision was reported at 6:24 a.m. Japan Standard Time, while the ship was transiting to a routine port visit in Singapore.

Search and rescue efforts are underway in coordination with local authorities.
Arrse's very own bartender imparting wisdom, wit and all things boozey.

NSP said:
Another one? This is becomng a habit!
Click to expand...

They're determined not to be second place to the RN.
Arrse's very own bartender imparting wisdom, wit and all things boozey.

Just can't get the staff these days..

NSP said:
Up until now I thought Fraserburgh trawlermen were the biggest hazard to navigation on the high seas but now I see it's actually the world's policespam...
Click to expand...

It's not easy to steer when your smacked off your tits.

Remember the rivalry between the old boys on the West Coast and North East Fishermen. NE despised the Westies as secretive and backwards as they spoke Gaelic between themselves out in the grounds, the Westies never trusted the NE saying they would happily slit a man's throat for a crate of fish.

rampant said:
It's not easy to steer when you're smacked off of your tits.
Click to expand...

For clarity, folks, that's Fraserburgh trawlermen not the USN.

So I've been told. Allegedly.

"There seems to be something wrong with our bloody ships today"

Said the US Admiral.

Loss of life may be higher following this incident, as there are 10 crewmembers missing from the destroyer. Another few officers' careers down the tubes possibly, subject to the outcome of the board of inquiry of course!

He was directly quoted when returning to the White House on Sunday night, responding to reporters’ questions about the collision by saying: “That’s too bad.”

big ned said:
He was directly quoted when returning to the White House on Sunday night, responding to reporters’ questions about the collision by saying: “That’s too bad.”

When has he ever been?

Deleted in consideration of Rampant's post about missing sailors.
I'm supposed to be in school right now, but instead I have Snarf, Popeye, and Luke Skywalker all pissed off.

Ten missing, five injured on the McCain so far.

No AIS for the McCain on MarineTraffic.com. Here's the last received AIS from the Alnic (almost three hours old):- 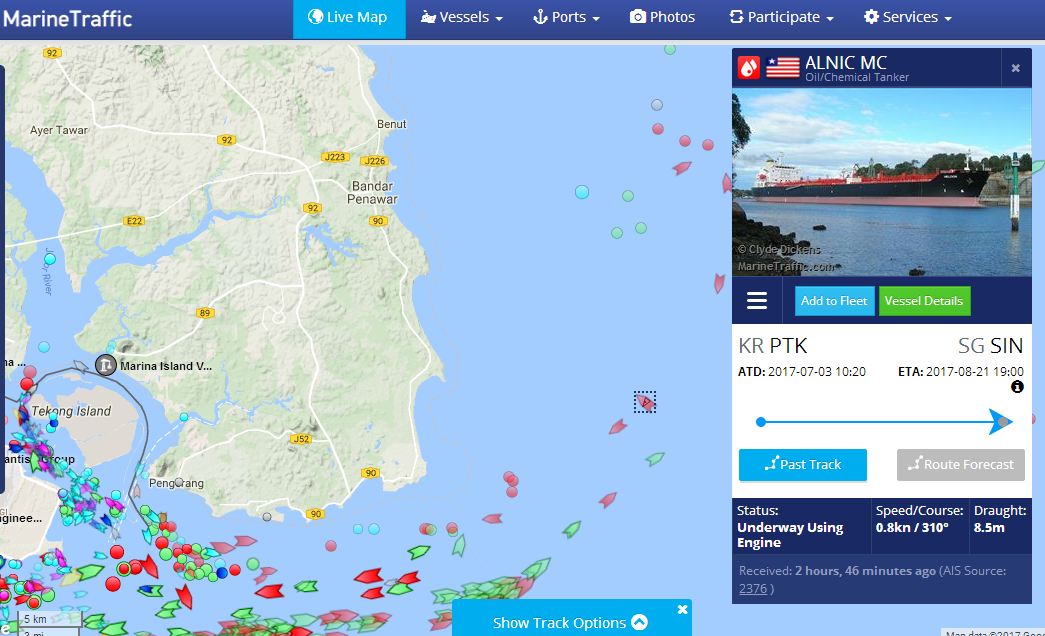 Moderator
Book Reviewer
I think the USN need a root and branch reform of their Bridge Management System, starting with how they man their bridges and the training for their junior watchkeeping officers.
All complaints to be sent to /dev/null

big ned said:
He was directly quoted when returning to the White House on Sunday night, responding to reporters’ questions about the collision by saying: “That’s too bad.”

McCain is better at the presidential comments as he proved when debating Hilary Clinton once: Sorry I couldn't join you at Woodstock Hilary, I had a previous engagement.

At the time of Woodstock, McCain was a prisoner of war in North Vietnam.

The missing sailors might be trapped inside compartments in the ship. Impact from a missile or another ship can bend the ship's structure requiring great force to open doors and hatches as happened on the USS Fitzgerald. Hopefully their missing shipmates will be found alive and well.

If they have gone into the water, Google tells me that the sea temperature is 29.4 centigrade. Lower than body temperature but they won't succumb to hypothermia soon, especially if they were on watch and went over the side while wearing their clothes. The exact location of the ship during the collision is known and there will be a very heavy search and rescue effort from Singapore, Japan and other ships in the area. Hopefully any sailors who went over the side will soon be back aboard ship for steak and chips with a salty yarn that they'll be telling for the rest of their lives.
ArRSe is the Hotel California - You can log-out any time you like, but you can never leave!

As A-M Says.Hopefully just trapped in a dry compartment,and recovered safely.
You must log in or register to reply here.