JERUSALEM — The U.S. Army has completed an interceptor test of the Iron Dome air defense system, the second event of its kind since two batteries were supplied to the service at the end of 2020.

The newly revealed test at White Sands Missile Range, New Mexico, which took place in mid-June, was carried out in conjunction with the Israel Missile Defense Organization, according to a statement from the Israeli Defense Ministry. Moshe Patel, the director of the organization, said that during the test, “the system intercepted all the threats, while being interoperable with U.S. systems.”

Statements from the Defense Ministry and Rafael both noted that testing “prepares the system for U.S. operational forces’ use by ensuring it meets U.S. Army safety standards and that the system will effectively operate within the U.S. AMD [air and missile defense] architecture.”

According to the statements, the U.S. Army plans to field the two Iron Dome Defense System-Army batteries as an interim cruise missile defense solution. The service has deployed one Iron Dome system to Guam since the fall of 2021.

Iron Dome is designed for use at fixed and semi-fixed locations to defend against “sub-sonic Cruise Missiles (CM), Groups 2 and 3 Unmanned Aircraft Systems (UAS), and rockets, artillery, and mortar threats,” the statement added, referring to a system by which drones are categorized by weight.

The test comes two weeks after the U.S. Marine Corps carried out a successful test of the Iron Dome’s Tamir missile at the same range.

Rafael in the early 2000s developed Iron Dome, which uses radar from Israel Aerospace Industries subsidiary Elta Systems. In the U.S., Rafael partners with Raytheon Technologies to produce the system.

“Future variants of the IFPC [Indirect Fire Protection Capability] program include technology insertions such as directed energy,” the recent Israeli statements said. The addition of directed-energy — or laser — technology to the Iron Dome system was shown to U.S. President Joe Biden when he visited Israel.

Iron Dome has been active for more than a decade with the Israel Defense Forces. It was initially used against short-range rocket threats from the Gaza Strip, but it has since received upgrades to confront numerous types of emerging threats. In May 2021, it was publicly revealed to have intercepted a drone for the first time during combat.

The Israel Missile Defense Organization, a division of the Defense Ministry’s Directorate of Defense Research and Development, leads the development of Israel’s multitiered air defense systems, including Iron Dome, David’s Sling and Arrow. The U.S. Congress has supported all three systems. The IMDO partners with the U.S. Missile Defense Agency on systems such as Arrow-4. 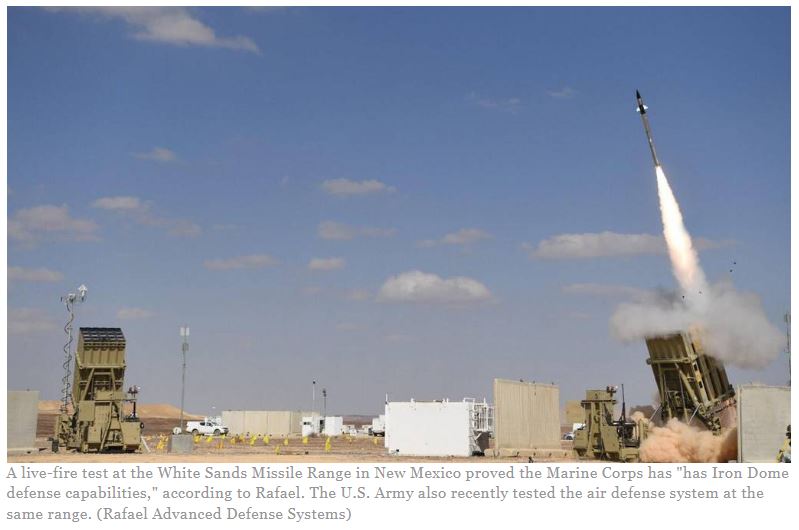 If it works. Get it.
Boys Boys
The Warlords Toys

Hard Rations said:
If it works. Get it.
Click to expand...

It was worked for a while.
It also plays well with others.

Should plug in fine to the ACS thingy and fit in nicely with AA, NAWS and ABMD in the overall BMDS deal that nobody knows about, even if they are sure that Hyper CGI imaginings that say the BOTD has finally caught up with the 60s hottest god rod tech and can beat it, so they can kill us all.

And it should even work on dodgy EU power, like its newest bestest friend AA.
Regnar

Ritch - So much less than just an easy rhyme...

Seems odd there's no land-based variant of SeaRAM, the RIM-116 interceptor is pretty much on-spec with Iron Dome's Tamir missile.

Edit: to avoid confusion, there is a naval version of Iron Dome called C-RAM. Which is not SeaRAM...
NULL