Speedy said:
Is that NI? I'd been reluctant to add any NI locations as, whilst there were several cold war locations there (including US bases) most had been removed by the early 70's due to the troubles.
An NI map may be a good project, but as I never did a tour there I have very limited knowlege of the locations etc.
Click to expand...

It does have the look about it doesn't it?

As an aside, do you know anything about this crowd?

ETA Home Page | Fortress Study Group
Last edited: 13 Jan 2021
I wants to finish my little bit and I wants to get home for my tea.

br9mp812 said:
First i ve seen with that pod on top can make out the boosters but cannot recall the pod
Click to expand...

The 'pods' (there's two) are the Thor ramjets.

giatttt said:
The map on this page may be of assistance.
Click to expand...

Partly incomplete/incorrect regarding nuclear stabling locations.
The stopped clock of The Belfast Telegraph seems to indicate the
time
Of the explosion - or was that last week's? Difficult to keep
track:
Everything's a bit askew, like the twisted pickets of the
security gate, the wreaths,
That approximate the spot where I'm told the night patrol
went through.

Themanwho said:
I am fairly sure that several GLCM were planned to be deployed to Longmoor near Bordon in 1985 if the the balloon had ever gone up, having got a lift back from Greenham Common one Sunday night from a ginormous black Yank Sergeant in his gas guzzling, left hand drive car.

Three of us were walking from Greenham Common back to Bordon after the car died in the M4 Services (a wheel actually fell off), and Plod took us to the nearest military base. Naively, we rang up the Bordon guardroom asking for the duty wagon to come and pick us up, to be told after the laughter stopped that they weren't providing a taxi service. So it was shanks' pony to Basingstoke hope we were in time for the milk train to Liss; about ten miles' walk, and then the huge Merkin-mobile hove into view and a southern drawl inquired "You boys need a lift?" We piled in, and after each being given a frosty cold Budweiser from the huge beer cooler on the back seat told him our tale of woe. We'd originally asked for a lift to Basingstoke but as soon as he heard we were based at Bordon, he offered to drive us all the way there, he knew the area from "Doin' recon on launch sites". So there you go.

I've always been treated well by the Cousins.
Click to expand...

They certainly used it as a training site on occasion: 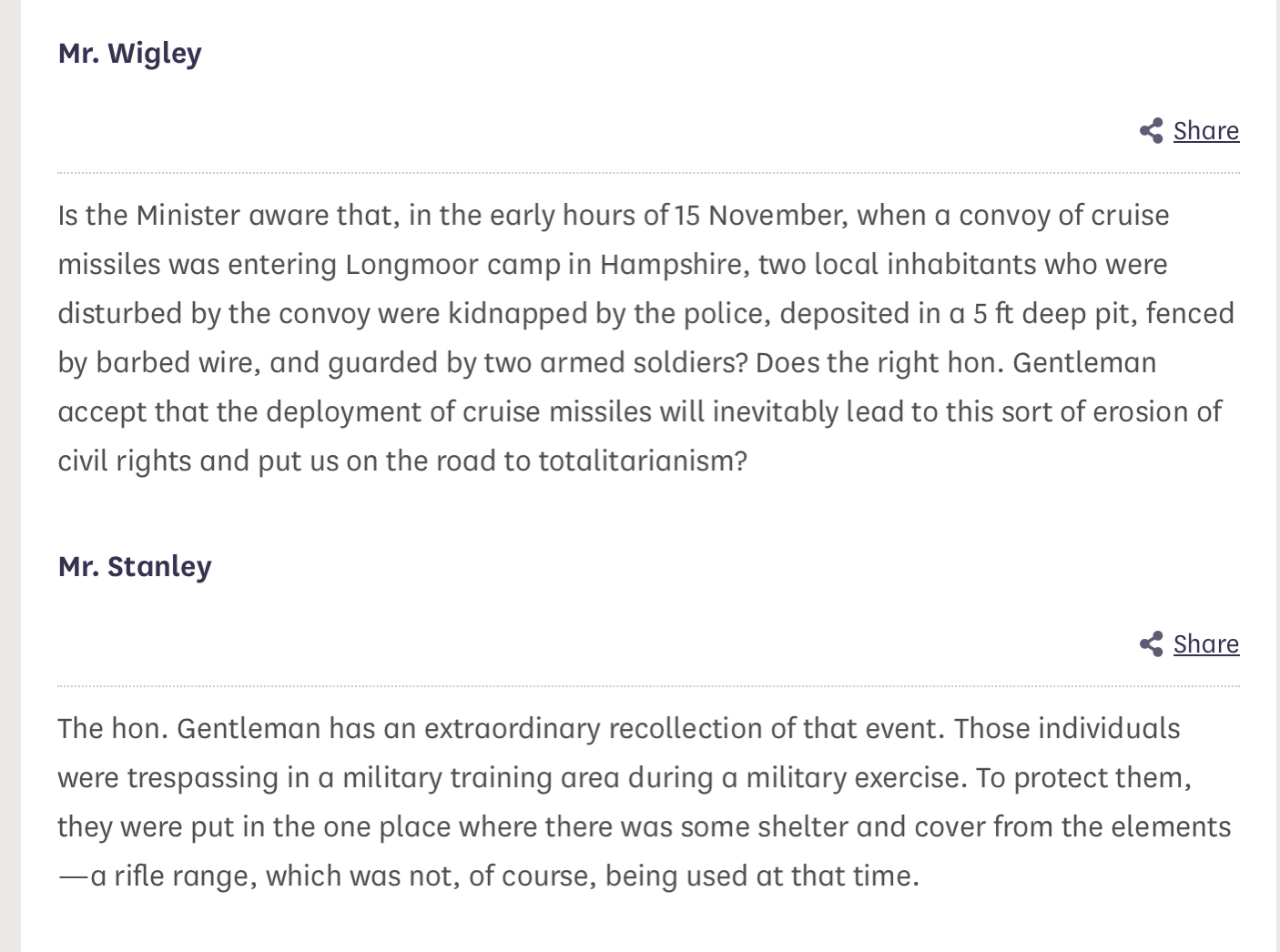 What program do you need to view a .kmz file? Windows cannot find a suitable application on my machine.
Last edited: 22 Jan 2021
And Ye Shall Know the Truth and the Truth Shall Make You Free - John 8:32.

Yokel said:
What program do you need to view a .kmz file?
Click to expand...

Google Earth is the classic. There are others, but GE is free and pretty good. The web version is ok, but the standalone app is miles better. You need lots of RAM with big files.

Google Earth also has the advantage of you being able to talke the sattelite images back in time, which helps greatly as many locations have been demolished or built over since 2000, but you can see them if you move the slider back on any pinned locations.
The universe doesn’t care what you believe.

CutLunchCommando said:
It does have the look about it doesn't it?

As an aside, do you know anything about this crowd?

They've been going for a while - academic/enthusiasts interested in fortifications since the advent of gunpowder. Helpful when I wrote my uni dissertation eons ago but I left as it seemed full of portly old men in blazers. Now I are one maybe I should rejoin.
O

If you are including the Royal Ordnance Factory sites, then the entrance to ROF Nottingham was located here:: 52°56'30"N 1°09'39"W at the remains of Kings Meadow Road.
The whole site was re-developed and is now a commercial centre, created after it was closed in 2001.
History of ROF Nottingham can be found on Wiki.

In 1989 there had been a number of closures of ROF Sites following reorganisation and privatisation. The remaining sites left by then were (if I remember correctly):-

frontlineulster.co.uk
I wants to finish my little bit and I wants to get home for my tea.

Yes I have, the problem I've found with NI is that many sites have misleading information, especially the republican ones where a mobile mast will be held to account as it may carry military signals!
Also much is hard to find now since lots of 'stuff' was removed with the Good Friday Agreement. These are still often recorded by various sites as exiting facilities even though thay have been levelled for 20 years now. Most annoying.
I have been adding to my West German map over the past week or so finding many more AD sites as well as the nuclear bases (GLBM and Pershing 2). It's really like a game of hide and seek as I can see the gaps in the AD screens and know there is supposed to be a site around there somewhere, but still unable to locate them. It really is surprising just how much of this is left out there and much of it is still in great (almost maintained) condition for some reason.
The universe doesn’t care what you believe.