Reading the CVF thread and the ongoing discussion of the utility of HADR and OOTW (Operations other than war) buying us influence in places (this post in particular CVF and Carrier Strike thread ) made me think of this game.

For those who haven't played it, it is a quite complex board game for 2 players (or 2 teams possibly) each taking the role of one side of the Cold War and the game basically runs through in turns from the start of the cold war to the end (if you last that long without nuking the world to oblivion). The aim is to build and hold control of countries across the world map for your chosen side, effected by playing cards which make things happen to alter the balance of influence - like Coups or small scale local conflicts, whilst trying not to tip the DEFCON level too high and start a nuclear war.
Neatly each card which relates to true historical events/people and are restricted in the same way e.g. The USSR can play 'Warsaw Pact formed' which helps them get influence in Eastern Europe, but then allows the US to play 'NATO formed' which makes it more difficult for the USSR to get influence into Europe.

Whilst none of the cards reflect HADR as direct influence makers there are cards that allude to a similar effect from OOTW - like 'Blockade' -where the USSR blockade Berlin and unless the US side carryout the Berlin Airlift (discard a strong card) they lose all influence in West Germany. Or 'AWACs sales to the Saudis' (see airshows are soft power too - at least I'm sure that's what the RAF say when justifying the T&S for that 5star hotel in the tropics) - which gets the US side influence into Saudi and also stops the USSR playing the Muslim Revolution card in Saudi therefore blocking USSR influence.


It is kind of like Risk but much more complicated and with a superb Cold War historical theme which is tied perfectly into the mechanics of the game. And I haven't mentioned that it also includes the space race and the requirement to keep the military hawks on your own side satisfied or lose points, or the clever way the points work as a balance not individual points eg. starting at 0 if the USSR score a point the balance moves +1 to USSR, so if the US score a point they dont go to +1 US but back to 0, scoring another US point will move it to +1US.
This game is to Risk like Chess is to draughts.

For anyone with a keen interest in Cold War history and boardgames this is a must have, but it is complicated to learn to play has a large rulebook, but once you get going it is a superb strategy game (and also a great way to learn about cold war history - the back of the large rulebook explains what the historical background for each card is).

Also it is available as an app for ipads and may have consumed a large amount of my weekend.

Has anyone else played this? 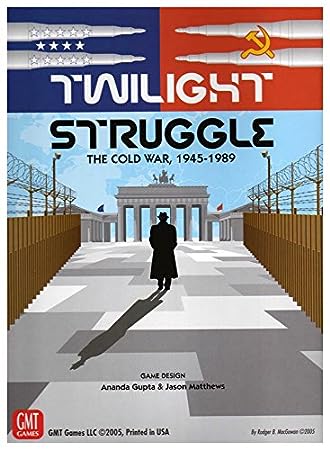 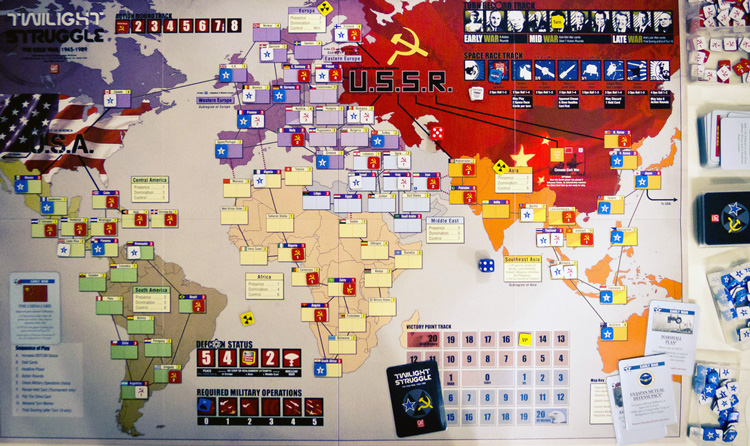 Moglington said:
Has anyone else played this?

It'll write off quite some time learning to play it. It's a complicated one.

The iPad version is a £10 and handy as it has tutorials and takes care of the admin for you (remembering to move counters/working out scoring etc).
I have both versions, whilst the iPad is good there is something pleasing about having a massive world map and moving pieces around it.
Also there aren't many people who play online and the computer AI smashes newbies - even when I gave myself the most advantage I could in the settings it still beat me until I read some of the strategies for players online.
I haven't tried if the iPad has a 2 player option (edit to add apparently it does) on the same iPad (it is not the sort of game Mrs moglington would play).

We had that on my last ship. No sod would play with me. Everyo e was too busy drinking and "socialising." Bloody normal people...

I think it's a game that you don't get the full value from until you've played it a good 5or10 times. It's not an easy pick up and play game like Carcassone or Settlers of Catan. Games last a good few hours (especially on first learning game) and have quite a bit going on and to keep track off.
Plus if you're a curious sort you'll end up reading the history bumpf in the back of the rules book as you play the cards and googling Cold War history and learning stuff all whilst making the game take far longer than it should!


Not really a game for loud socialising with lots of beers more one for quietly trying to take over the world and best a friend, whilst working through a nice bottle of single malt, learning things you never knew about the Cold War (and doing your best dodgy Sean Connery-style Russian impression - "aha with this coup in Cuba I have you now, comrade!")
Last edited: 15 Sep 2017

Book Reviewer
An excellent game - SWMBO and I play when we expect a week of evenings free for an hour or 2.

Brilliant game. You do have to put in the time to have a few 'practice' games to understand the cards coming. Worth buying the electronic version on Steam to save yourself the effort (plus you can play it solo against the computer).

instinct said:
We had that on my last ship. No sod would play with me. Everyo e was too busy drinking and "socialising." Bloody normal people...

Sent from my SM-G920F using Tapatalk
Click to expand...

I struggle with a £9.99 game with only 5 people rating it with 3 stars

The War on the Eastern Front , The Soviet Union 1941-1945 A Photographic History