Turkey - Back to the past - official

Robs dad said:
When Erdogan stops wearing western business suits and ties and starts to favour some eastern influenced robes with a silly hat THEN we know we're entering the next creeping phase of caliphism and Erdogan has given up trying to enter the EU.
Click to expand...

And Erdogan's influence is continuing to spread. Turkish-funded, and I assume staffed, mosques are among the major building projects in the Balkans, particularly Kosovo, but there's a much wider geographical agenda at play.

'Turkish president Recep Tayyip Erdogan will send around forty new imams to Belgium in 2020, a lot more than in previous years.

'They are being sent in response to the shortage being faced by many Turkish mosques, Het Laatste Nieuws and De Morgen reported on Tuesday. “Some are only coming here for a month and serve to make up for the shortage of imams during Ramadan,” Hakan Celiköz, a member of the governing council of the Flemish-Turkish association Union Turque (Turkse Unie), explained. “But others will stay longer. Sixty per cent of our imams have to be replaced because their residence permit is limited to three years and, in many cases, has already expired.”

'At the Belgian HQ of Diyanet, the Turkish authority responsible for the conducting of Islamic religious matters in Turkey and Turkish diasporas throughout the world, there was no one available on Monday to make a comment on this state of affairs. Flanders has fifty mosques belonging to Diyanet. Thirteen of them have been recognised and are subsidised. According to Celiköz, it is mainly in non-recognised mosques that the greatest shortages are encountered. Sending imams from Turkey is in any case controversial because the government would prefer these religious leaders to be named and trained by the Executive of Belgian Muslims. Furthermore, Diyanet has a reputation for being the “long-arm” of the Turkish regime, with influence on much more than just religion.

'According to State Security, Diyanet is causing a polarisation within the Turkish community by presenting opponents of Erdogan’s party as “enemies of the State.” '

www.brusselstimes.com
"Those who can make you believe absurdities can make you commit atrocities." - Voltaire
“Nobody's slave, nobody's tyrant” - Generallöjtnant Jakob Albrekt von Lantingshausen
"Only the dead have seen the end of war" - Plato

'Responding to an e-mail question about which countries North Macedonia has requested support from in order to fight COVID-19, Dimitrov said the European Union provided 4 million euros ($4.3 million) worth of assistance, Norway and China declared they will provide support and the Netherlands will send test kits. He added that they also requested help from Turkey. Szijjarto said Hungary provided 100,000 masks and 5,000 protective garments to North Macedonia to support the health care system in the fight against the pandemic. He also criticized the EU by saying that the coordination among bloc’s members is very slow and they have left each other alone in this fight.

'As of Sunday, North Macedonia announced a total of 18 deaths, 555 confirmed infections and 23 recoveries.'

www.dailysabah.com
"Those who can make you believe absurdities can make you commit atrocities." - Voltaire
“Nobody's slave, nobody's tyrant” - Generallöjtnant Jakob Albrekt von Lantingshausen
"Only the dead have seen the end of war" - Plato

And no surprise there, but I'd bet it won't be going to all BiH.

'Turkey will provide medical and professional assistance, as well as support in the procurement of essential goods to Bosnia-Herzegovina to help combat the country's coronavirus outbreak, said the Turkish foreign minister on Tuesday.

'As part of measures to curb the spread of the virus, the government has declared a state of emergency and imposed a night curfew from 8 p.m. to 5 a.m. local time. The country has also shut its borders to foreigners, while schools, colleges, sports halls and gyms have also been closed.' 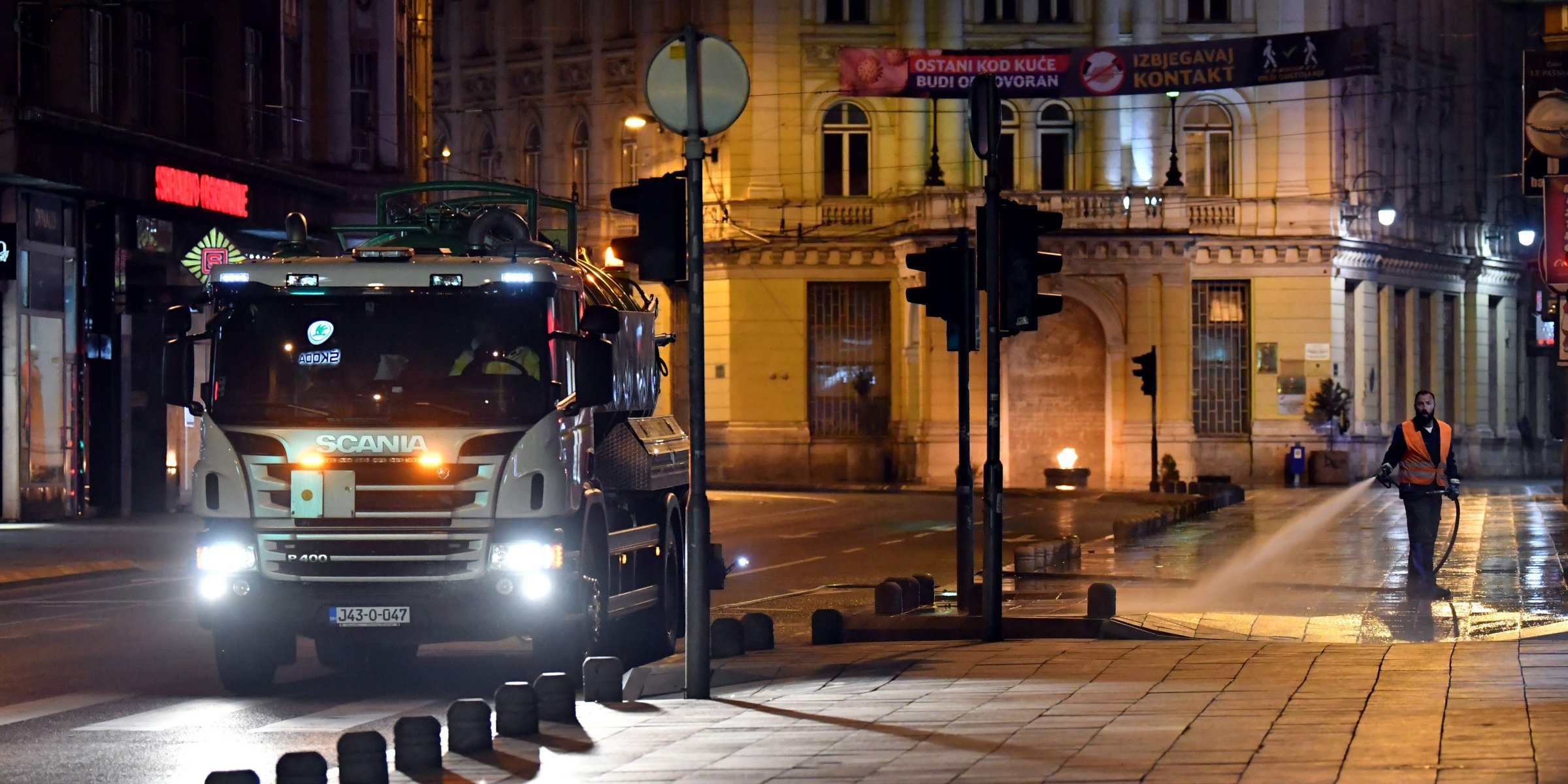 Turkey will provide medical and professional assistance, as well as support in the procurement of essential goods to Bosnia-Herzegovina to help combat the country's coronavirus...

www.dailysabah.com
"Those who can make you believe absurdities can make you commit atrocities." - Voltaire
“Nobody's slave, nobody's tyrant” - Generallöjtnant Jakob Albrekt von Lantingshausen
"Only the dead have seen the end of war" - Plato

Slowly turning back the clock 110 years. Don't look north to Europe, look east across the Bosphorus.

'A Turkish military cargo plane carrying medical supplies for use against the coronavirus pandemic arrived on April 8 in five Balkan countries.

'Serbia's capital Belgrade was the first destination for the Turkish aircraft coming from Turkey’s capital Ankara. Serbian Defense Minister Aleksandar Vulin and Turkey's Ambassador to Belgrade Tanju Bilgiç received the aid at Nikola Tesla Airport. Vulin there said that in such difficult times not only do friendly people and countries emerge, but also the future. "In the most difficult times like this, we’re also building our future policy. Serbia will always remember those who helped it, what happened with it," said Vulin. Vulin also thanked Turkey's President Recep Tayyip Erdoğan for the medical assistance "reaching us at the right time."

'Bilgiç, for his part, said that with this assistance, Turkey wanted to show that it stands by Serbia in these difficult times. The aid includes 100,000 protective masks, 2,000 protective suits, and 1,500 COVID-19 tests. The boxes of aid bore the words of 13th-century poet Mevlana Rumi, "There is hope after despair and many suns after darkness," plus the message: "With love from Turkey to the people of Serbia." Serbia has confirmed 2,666 COVID-19 cases so far, with 65 deaths. The plane's second stop after Serbia was Bosnia and Herzegovina.

'Arriving at Sarajevo International Airport in the capital, Security Minister Fahrudin Radoncic received the aid together with Turkey's Ambassador to Sarajevo Haldun Koç. Bosnia has confirmed a total of 777 coronavirus cases so far, with 33 deaths.

'The plane later proceeded to Montenegro, North Macedonia, and Kosovo.

'On social media, Montenegro's President Milo Djukanovic thanked Erdoğan. "Together Montenegro and Turkey in the fight against COVID-19. Thank you, President Erdogan," said Djukanovic. Montenegro has confirmed a total of 248 coronavirus cases so far, with two deaths. Kosovo confirmed the first COVID-19 case on March 13. Since then, at least 184 have tested positive, while five have died. North Macedonia has 599 cases with 26 deaths.

'Last week, Turkey also sent medical aid to Italy and Spain, the worst-hit countries by the coronavirus in Europe. NATO chief Jens Stoltenberg had praised Ankara for the aid, along with Italy and Spain. In March, Foreign Minister Mevlüt Çavuşoğlu said that 23 countries have requested aid for coronavirus equipment.' 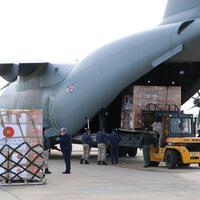 A Turkish military cargo plane carrying medical supplies for use against the coronavirus pandemic arrived on April 8 in five Balkan countries.

www.hurriyetdailynews.com
Last edited: 9 Apr 2020
"Those who can make you believe absurdities can make you commit atrocities." - Voltaire
“Nobody's slave, nobody's tyrant” - Generallöjtnant Jakob Albrekt von Lantingshausen
"Only the dead have seen the end of war" - Plato
You must log in or register to reply here.