masked off and painted in the base colours. 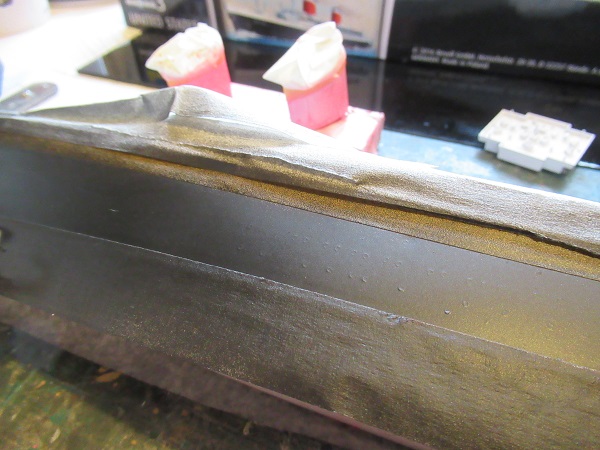 de masked showing the base colour that I can use to build up the look I want for the ship, as she looks in the video's above 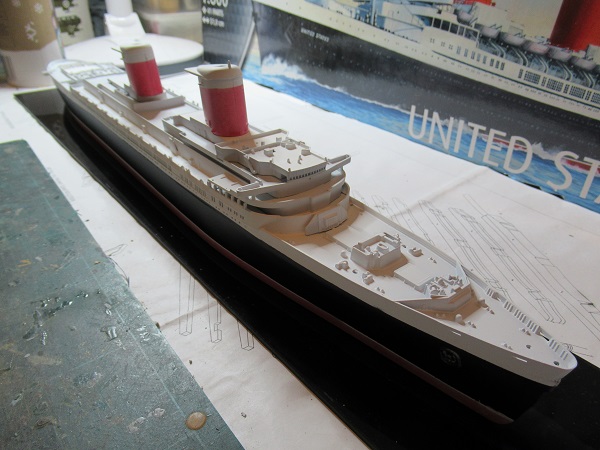 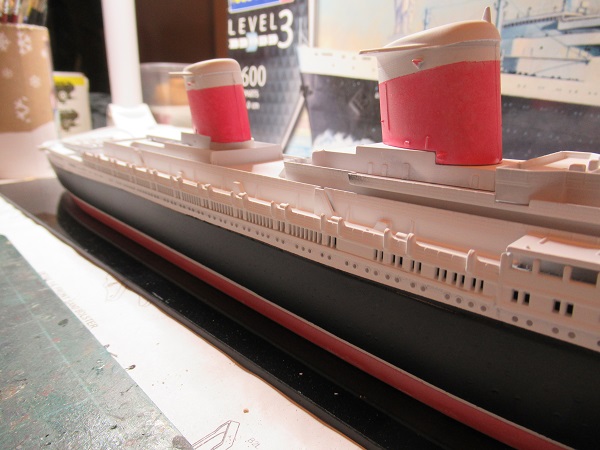 never gets old, drone footage, this clip shows the stem right at the start, the rust there is extreme, in a particular pattern I need to replicate, probably made by cables.

Bodenplatte said:
I had a large kit of the United States manufactured in the 1950s by an American company whose name I do not remember. All I really remember of it is that it was full-hulled. The kit included a roll of white adhesive tape, very narrow, which had to be stuck on to represent the white line which separated the black upper hull from the red of the bottom.
The same company made a Mississippi riverboat, a side wheeler, also in a large scale.
Click to expand...

Might it be this offering by ITC? The box says that the finished kit is 28" long.

www.scalemates.com
Class A, Category 1, ARRSE Vermin, and proud of it.

Gun_Brickie said:
Might it be this offering by ITC? The box says that the finished kit is 28" long.
Click to expand...

the second stage of the rust painting process, long winded and fiddley, two more stages to come on the foredeck.

stage one salt on the black area of the hull. 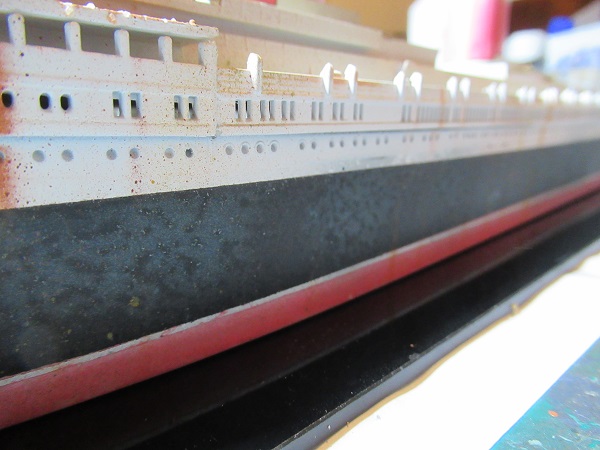 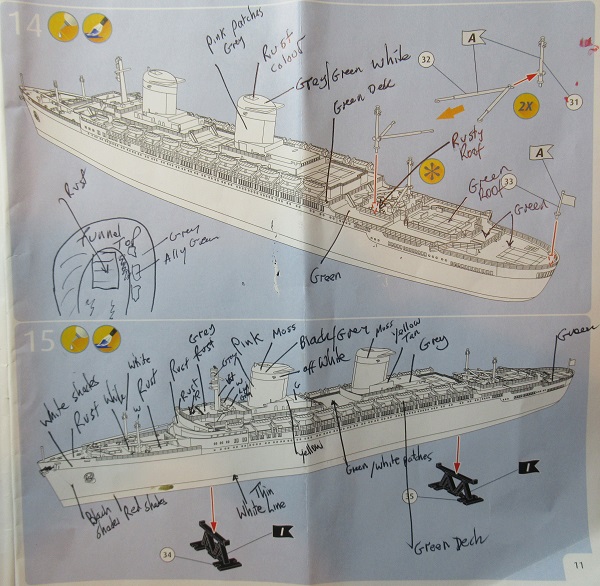 stern in it's second green phase. 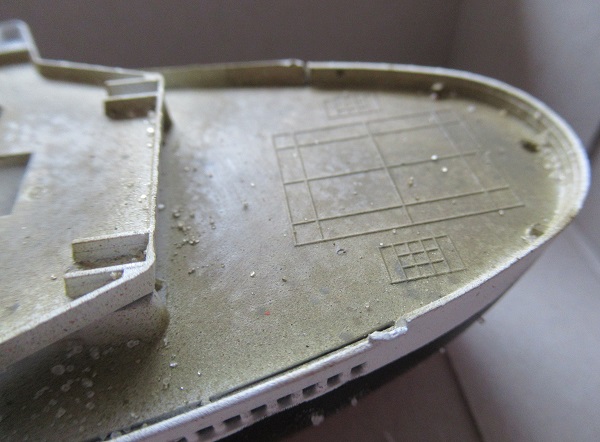 long long way to go yet, each colour tone process taking a day to cycle, but it's the only way I'll get the result I'm looking for. 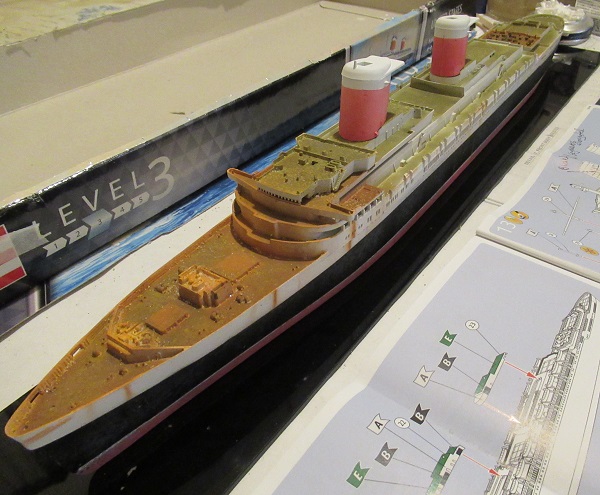 when the acylic paint dries, it dries matt and is a lot lighter. 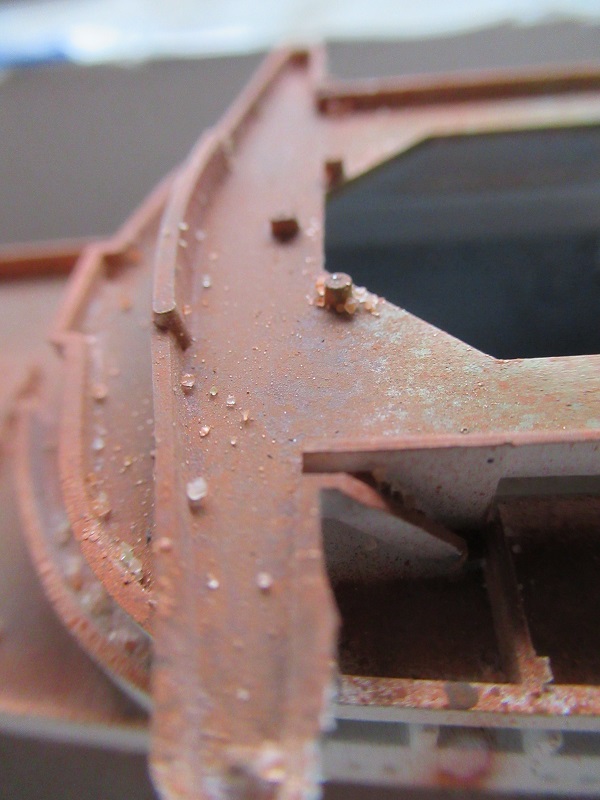 second stage salt, starting work building up the wear on the funnels. 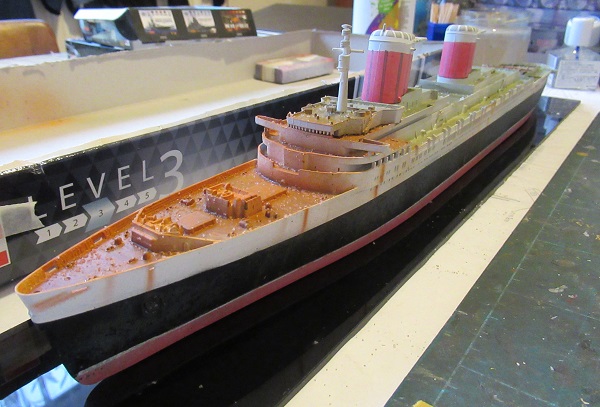 cheers, the streaking is done by airbrushing through a slit in card, varying the volume for each streak, I'm using a double action airbrush, so varying the amount of paint for each streak is done simply by pulling back further on the trigger, pushing down simply releases the air pressure, each streak would be different lengths and darkness of red depending I guess, on the severity of the rust above, that is feeding the streak.

the green decks dry overnight, the amount of moisture involved takes hours to dry off, but the result is getting closer each time to what I'm after. And it allows the different shades to meld together and look natural. 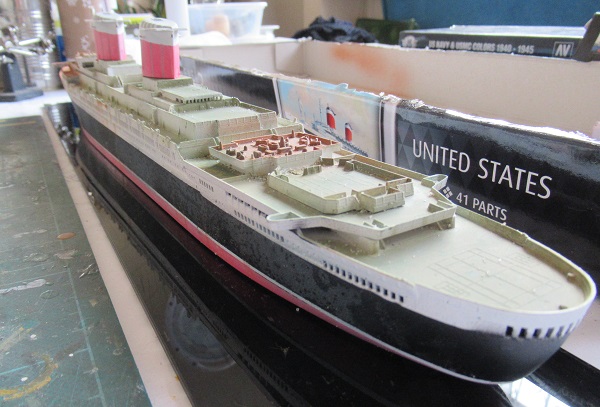 it may be time for a radical reversal, going back quite a few steps. The problem I have now is the kit bulwark rails that I've gone with now look massively overscale with the fine paintwork they are up against, I'm going to take up the rear upper decks and sand them flat, getting rid of the rails and mold on detail, a bit like I did for the KGV ship model I did earlier, also a Revell offering. 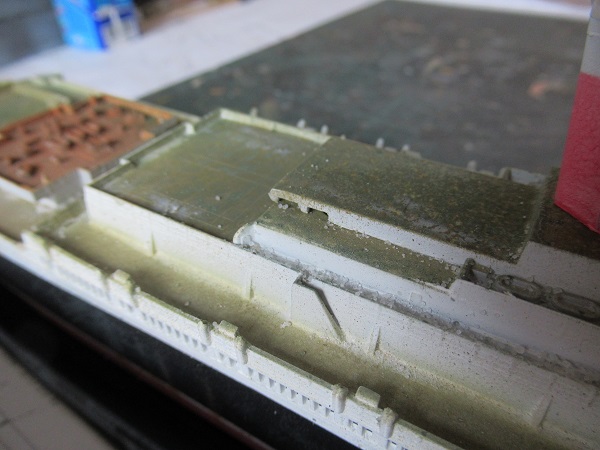 the stern deck appearance would improve without that thick bulwark rail, replaced with PE one's maybe. 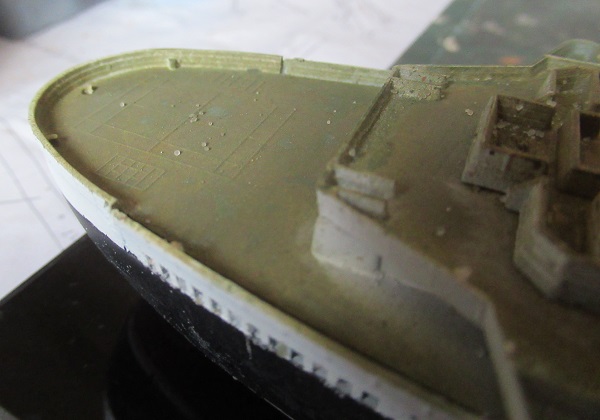 Awesome job there...
In the career of glory one gains many things; the gout and medals, a pension and rheumatism....all of these fatigues experienced in your youth, you pay for when you grow old. Because one has suffered in years gone by, it is necessary to suffer more, which does not seem exactly fair.

well thanks for the compliment, but I'm not happy with the railings, their thickness is out of scale with the paint effects I'm putting time and effort into, so I'm stopping, and going backward to do what I should have done right at the start. 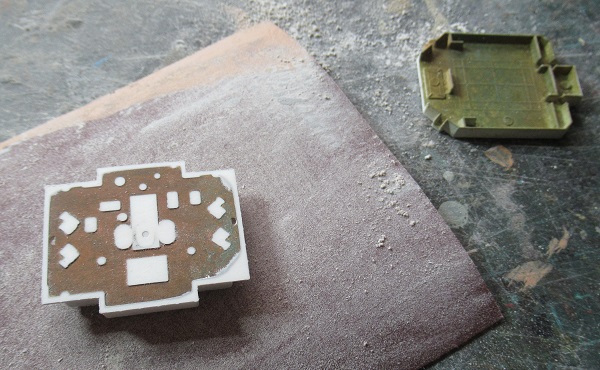 the bridge deck will need some of the features rebuilt, such as those shown in the drone footage posted above.

Thanks for that, but we all know if it's not right, what's the point, keep going backward until you are happy, so far so good going backward. 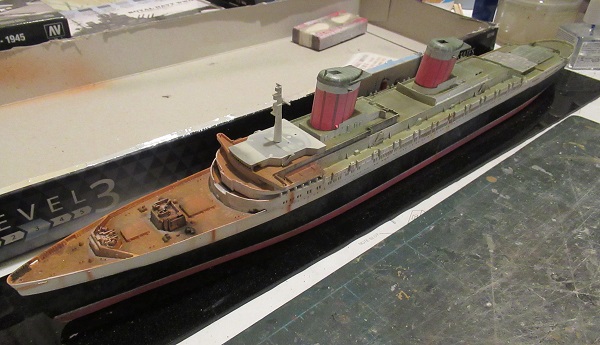 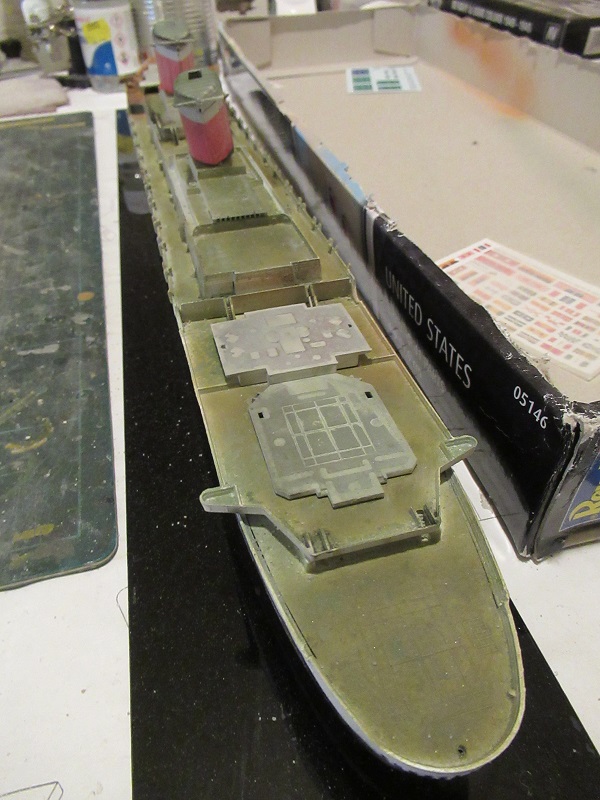 Most developed nation harbours are clean due to modern legislative controls on pollution, etc. 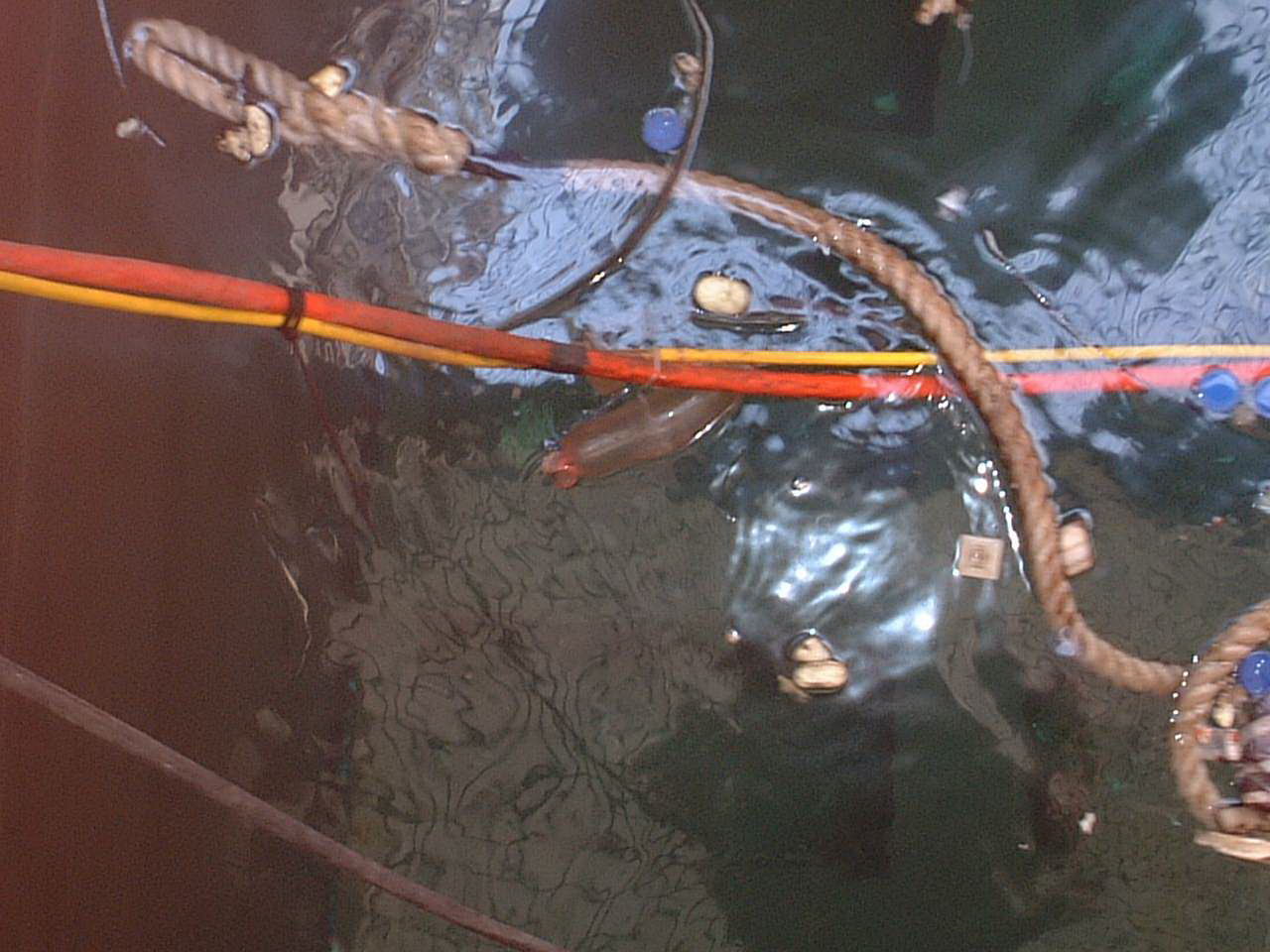 The Tyne (after heavy rain and storms):- 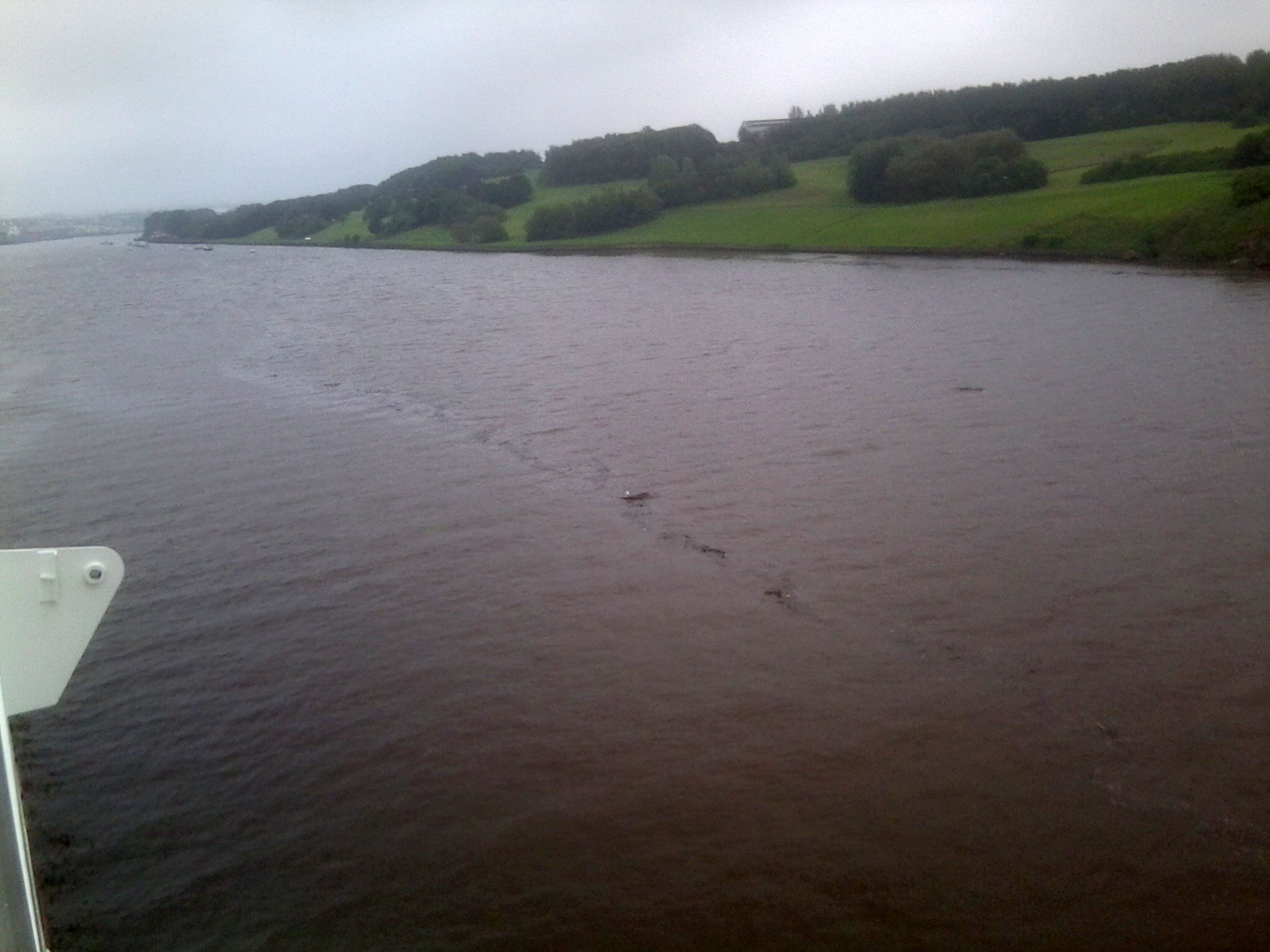 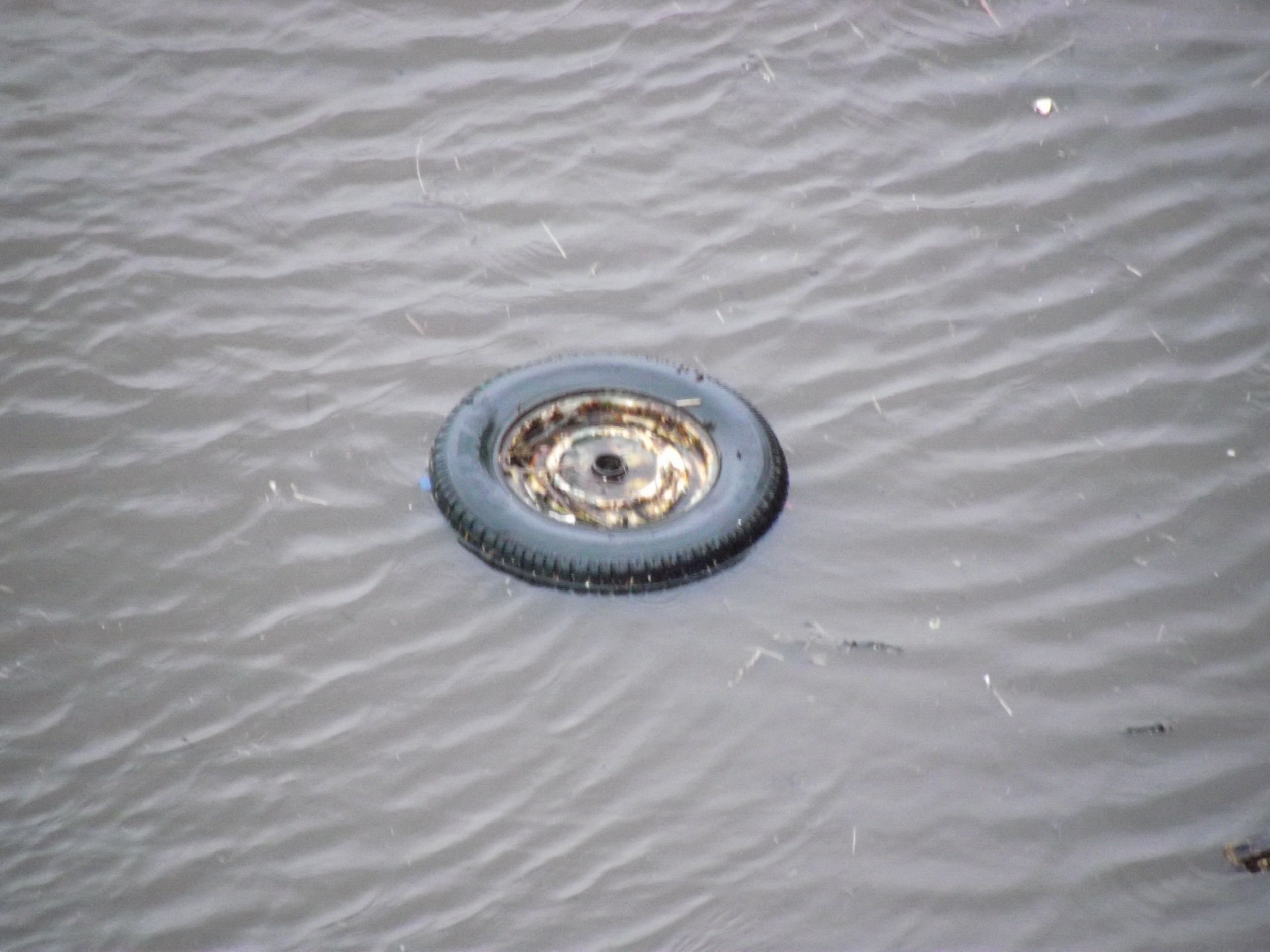 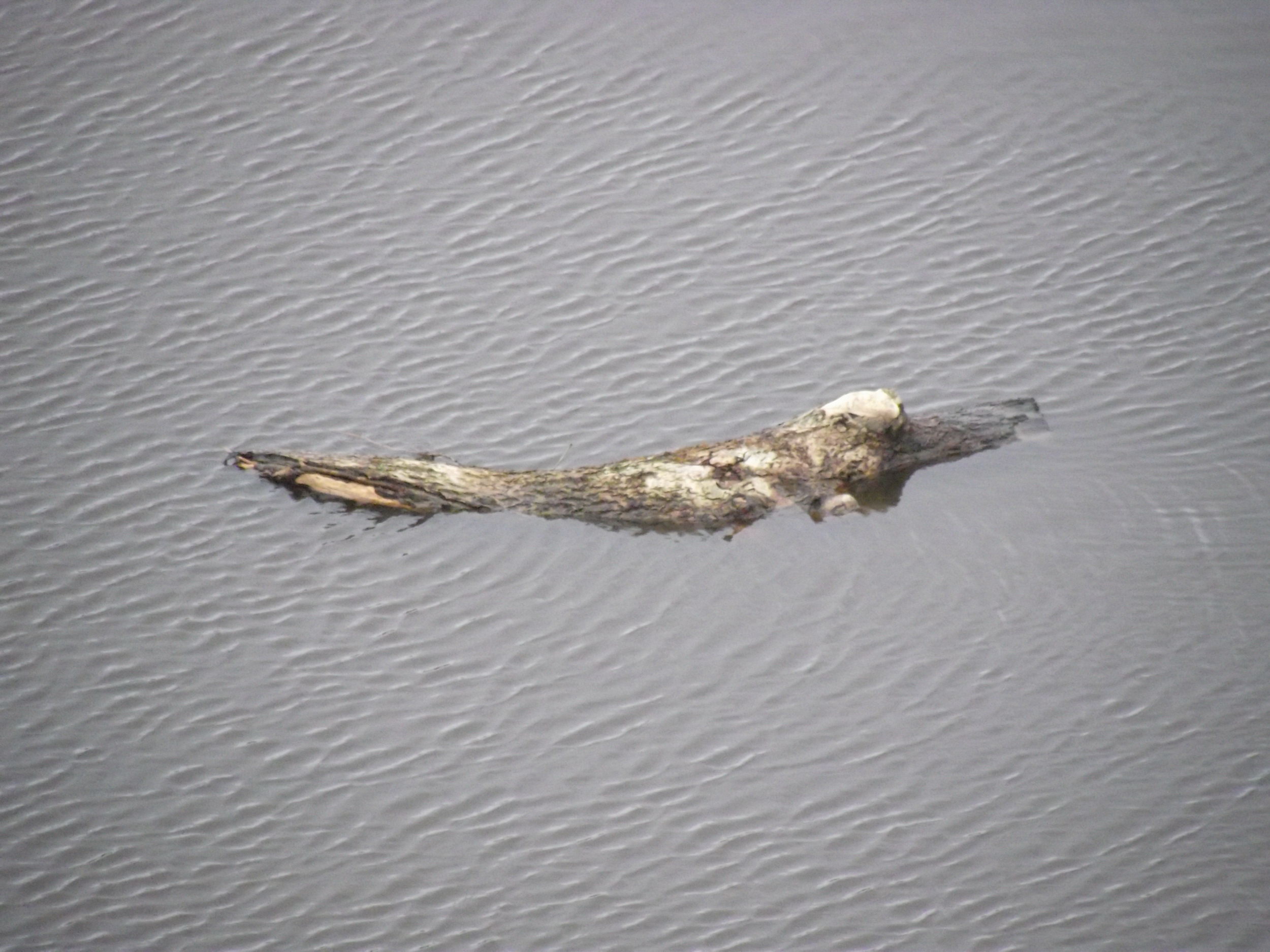 Port of Los Angeles (an actual American port! Surprisingly clean, given their general attitude to passing laws that will cost campaign contributors money):- 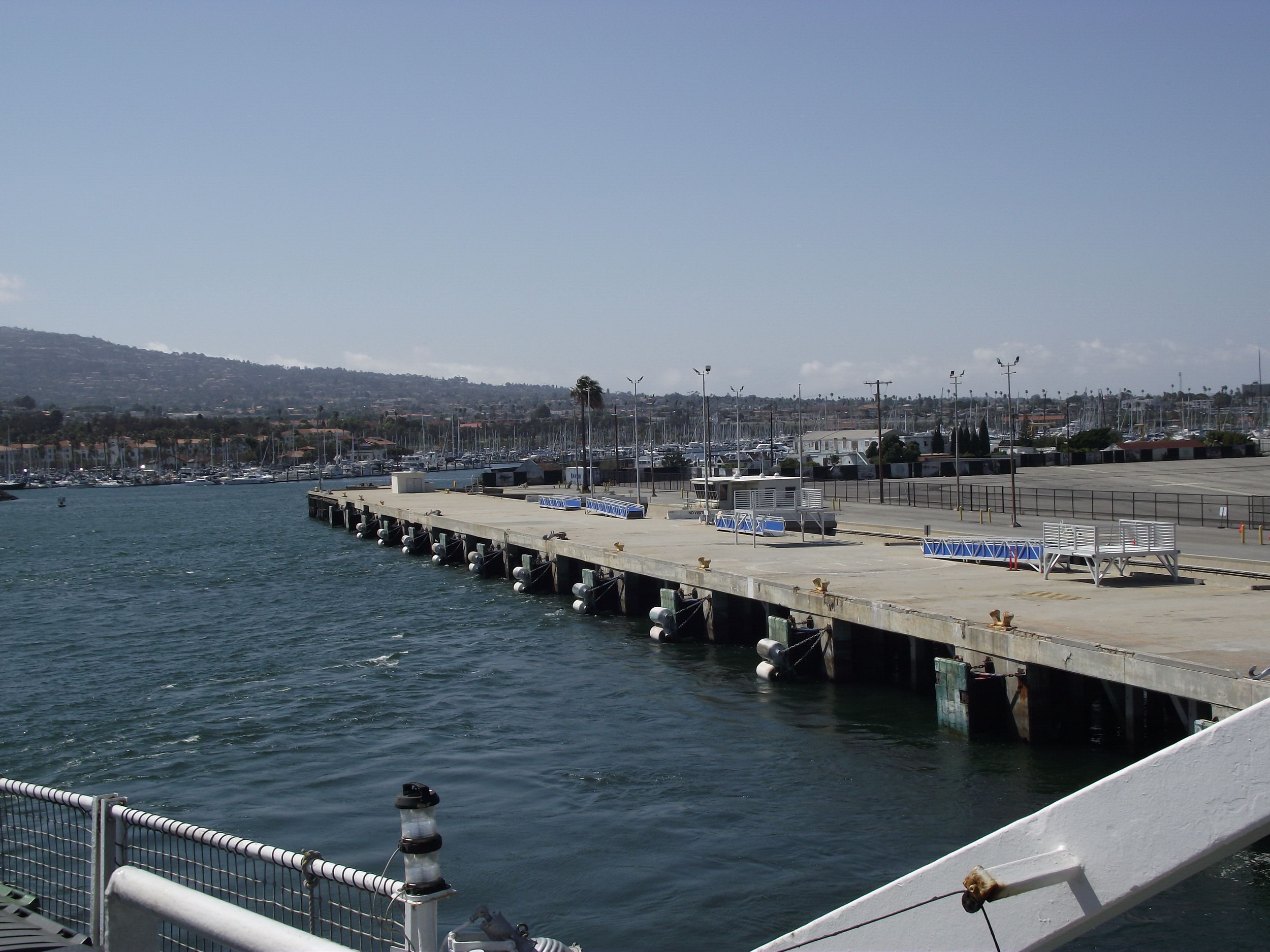 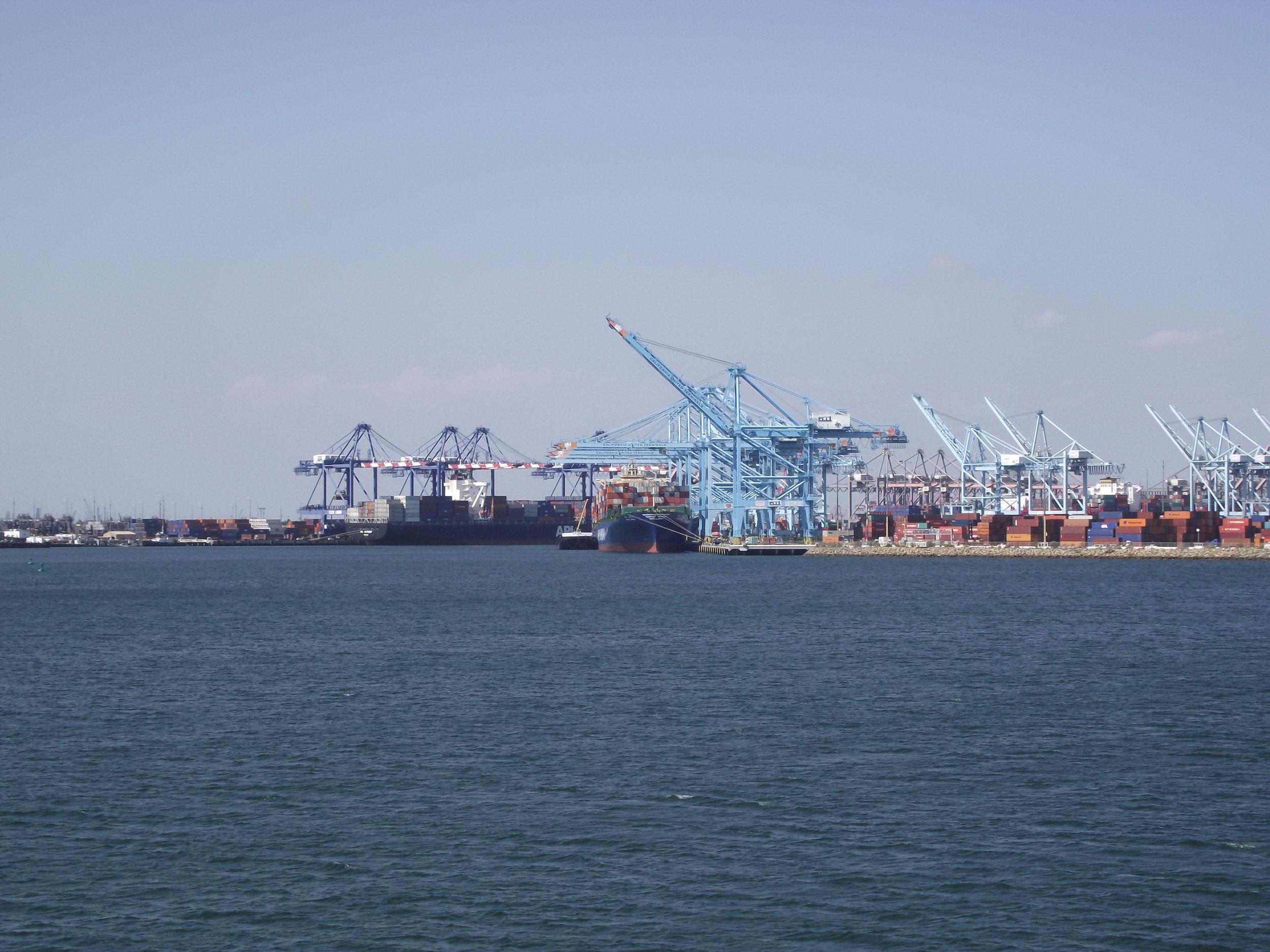 You have to look carefully but you can glimpse the turgid mess that is the waters of Mumbai harbour:- 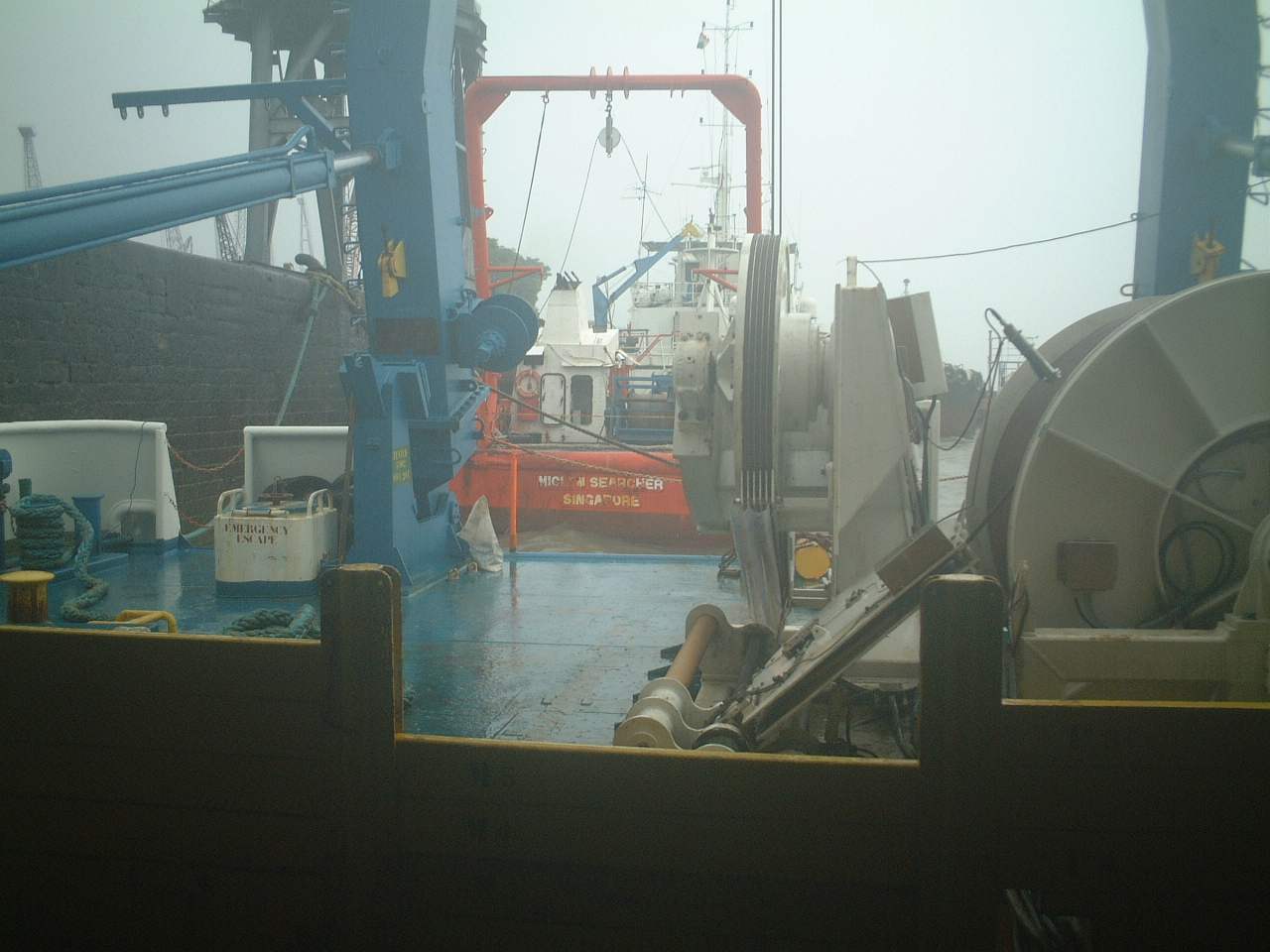 Remember: the black water is down to the depth and the weather - even deep water has a blue hue in the top layer if the sun is shining. In shallower water the sun reflects off of the sand on the bottom and you get a "double filter" so it looks bluer - and can appear cyan viewed from height (the water filters the other parts of the light spectrum in much the way the atmosphere does as they have a longer wavelength than the blues and violets and are not scattered towards the eye as much). Green water is combination of temperature (affecting density) and suspended sediment - so in shallow water prone to current turbulence (such as the southern North Sea) you get dark green water on non-sunny days with a brown tinge from the suspended silt and sand. On a sunny day you get a blueish-green colour with the grains of the suspended sediments clearly visible if you look over the side. It takes a shallow-submerged object to be passing to allow one to perceive that you can see a good two or three metres below the surface. Nightmare for visual surveys, though - it's like peering at a pipeline through dense fog.

Pick your harbour, pick your season to work out your colour, basically.
Last edited: 20 Nov 2021
Never in the field of human conflict was so much towed away from so many by so few.

Ijmuiden harbour - more or less the same bit of water in each pic (i.e. same depth)...

On a nice, calm summer's day:- 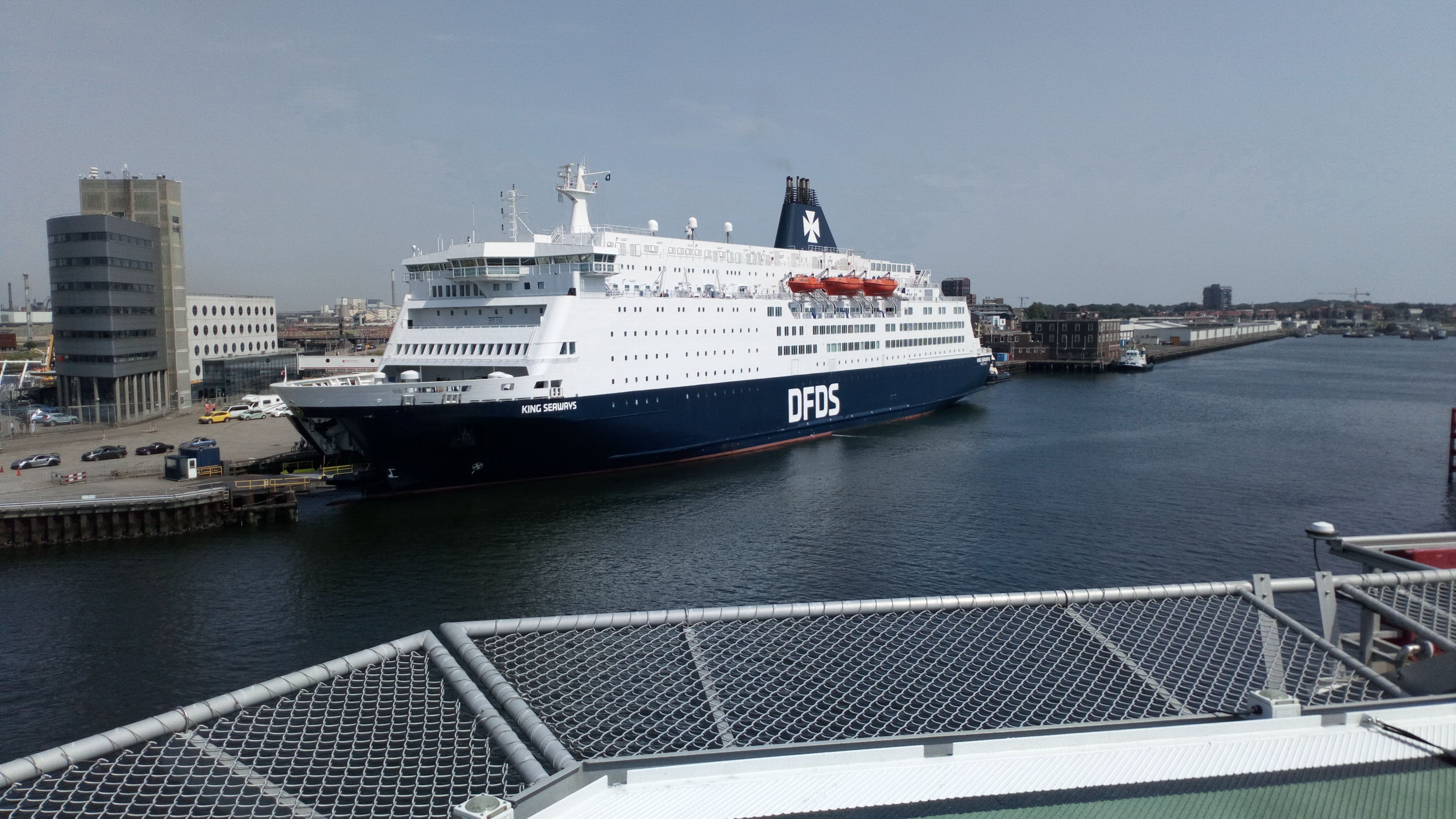 On an overcast spring day:- 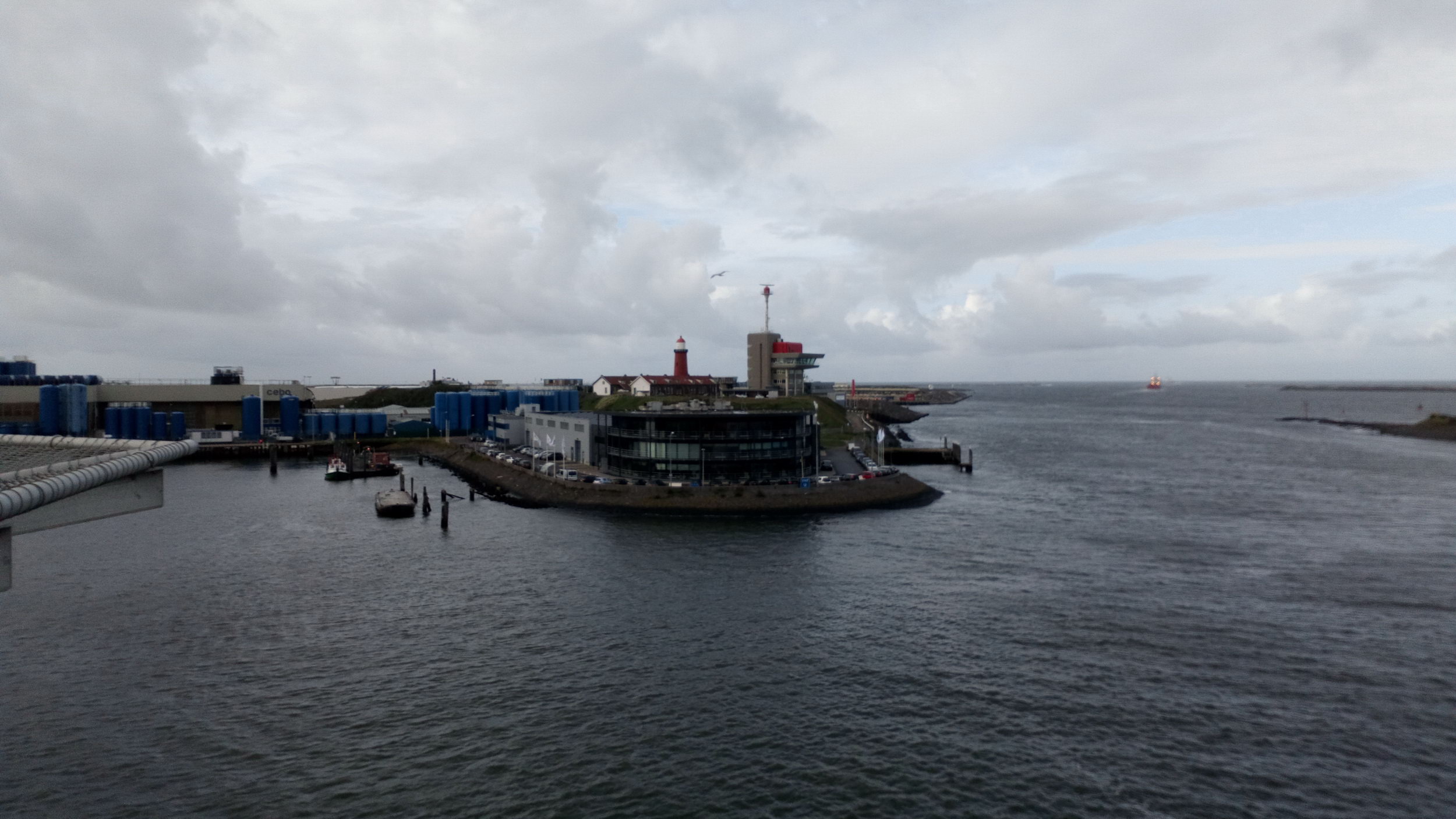 During a late-summer hooley - gales, torrential rain, the works:- 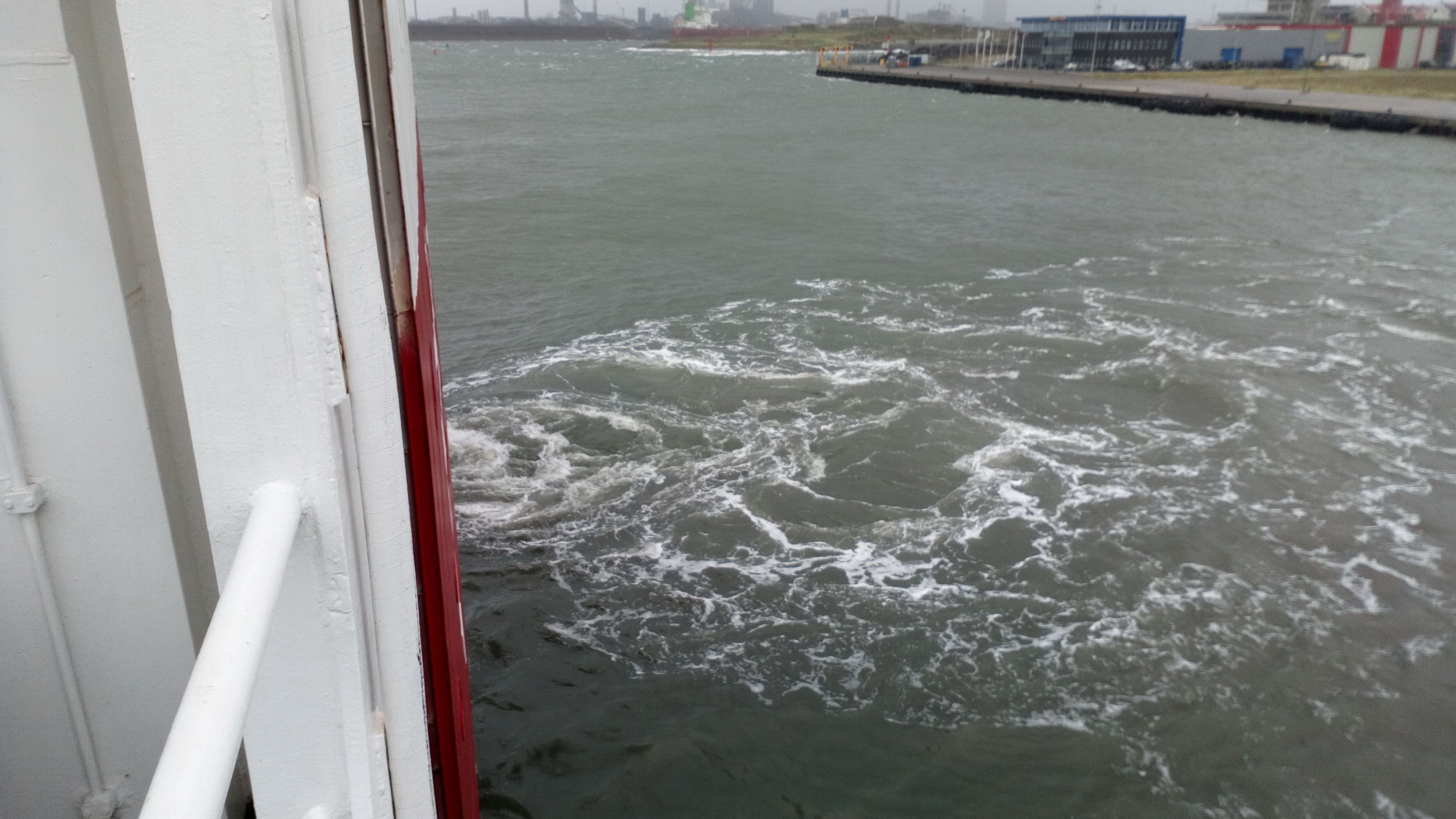 Muddy grey from stirred-up bottom and rainwater run-off from the quays, no reflection to speak of, lots of thruster wash to stop the wind against the the other side of the ship from snapping our ropes - but indicative of the shades seen in the whites and light greys of the wash where the weather causes wave wash against the rock armour protecting Forteisland from erosion in the background. RGB value of the mean shade: 119,122,114. Willow Grove - HEX color #676A63, Color name: Willow Grove, RGB(103,106,99), Windows: 6515303. - HTML CSS Color
Last edited: 20 Nov 2021
Never in the field of human conflict was so much towed away from so many by so few.

excellent scene setters there @NSP. makes me want to take a sea trip.

getting the funnels closer to the actual one's on the ship.... 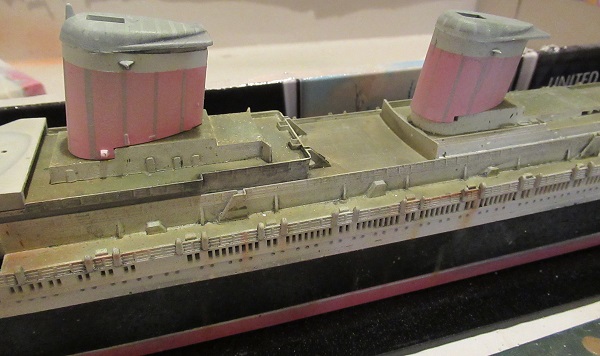 the jibs, minus their booms, with the lookout tower, the yard that crosses the tower looks rather thick and out of scale. 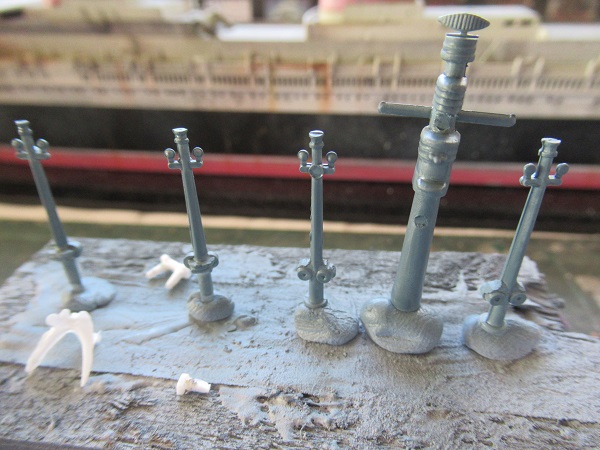 so I've replaced the yard with thin stretched sprue. The sanded down handrails replaced with PE rails from the spares box, and vents and electrical junction boxs replaced with scrap. 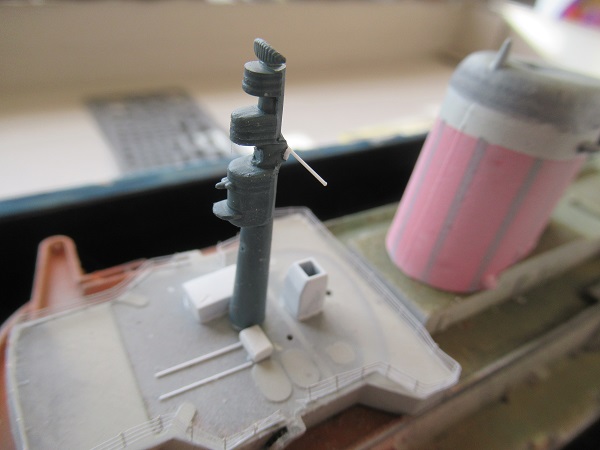