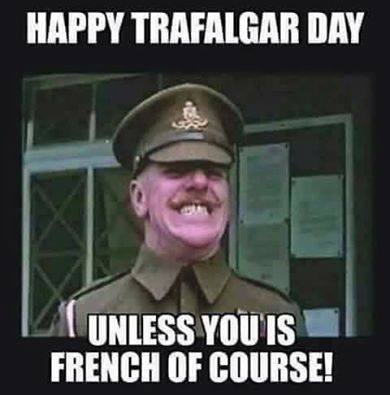 Too late, chap: I got there first with my Proper Remembering

The victory at Trafalgar was no accident, nor were Nelson's earlier victories. A huge effort had gone into making our ships seaworthy, their weapons ready, and training the sailors and marines.

The tactics had been devised in advance. Gun crews had been extensively drilled, and could load, fire, and reload in a short space of time. The shipwrights and sail-makers had also been train, and were at the top of their game, as were the signallers. The marines had paid attention to musketry.

The men in the British fleet were fitter than their counterparts, with Nelson taking an interest in their welfare and things like exercise and diet, and motivated by fear of a French invasion.
And Ye Shall Know the Truth and the Truth Shall Make You Free - John 8:32.

Yokel said:
The marines had paid attention to musketry.
Click to expand...

Yes, remind me who wouldn't let them go up into the fighting tops to shoot at the French marines.
If you think you know the answer then you don't really understand the problem.

"I hold that it is quite wrong for the soldier to want to exercise command over the air striking forces. The handling of an Air Force is a life study, and therefore the air part must be kept under Air Force command."
Viscount Montgomery of Alamein

Did your anscetor fight with Nelson?

My surname is not very common and has come up with 6 possibles, one of which comes from the area my family were living in at the turn of the 19thC. Thanks to my sisters efforts in tracing the familly tree I shall do some further research.
We’ve all heard that a million monkeys banging on a million typewriters will eventually reproduce the entire works of Shakespeare. Now, thanks to the Internet, we know this is not true.

The man who invented predictive text has just pissed away. His funfair is next monkey.
You must log in or register to reply here.