I trust this is in keeping with this thread. The book below gives a BRITISH battle for each day of the year. A succinct and very interesting (coffee table) book. 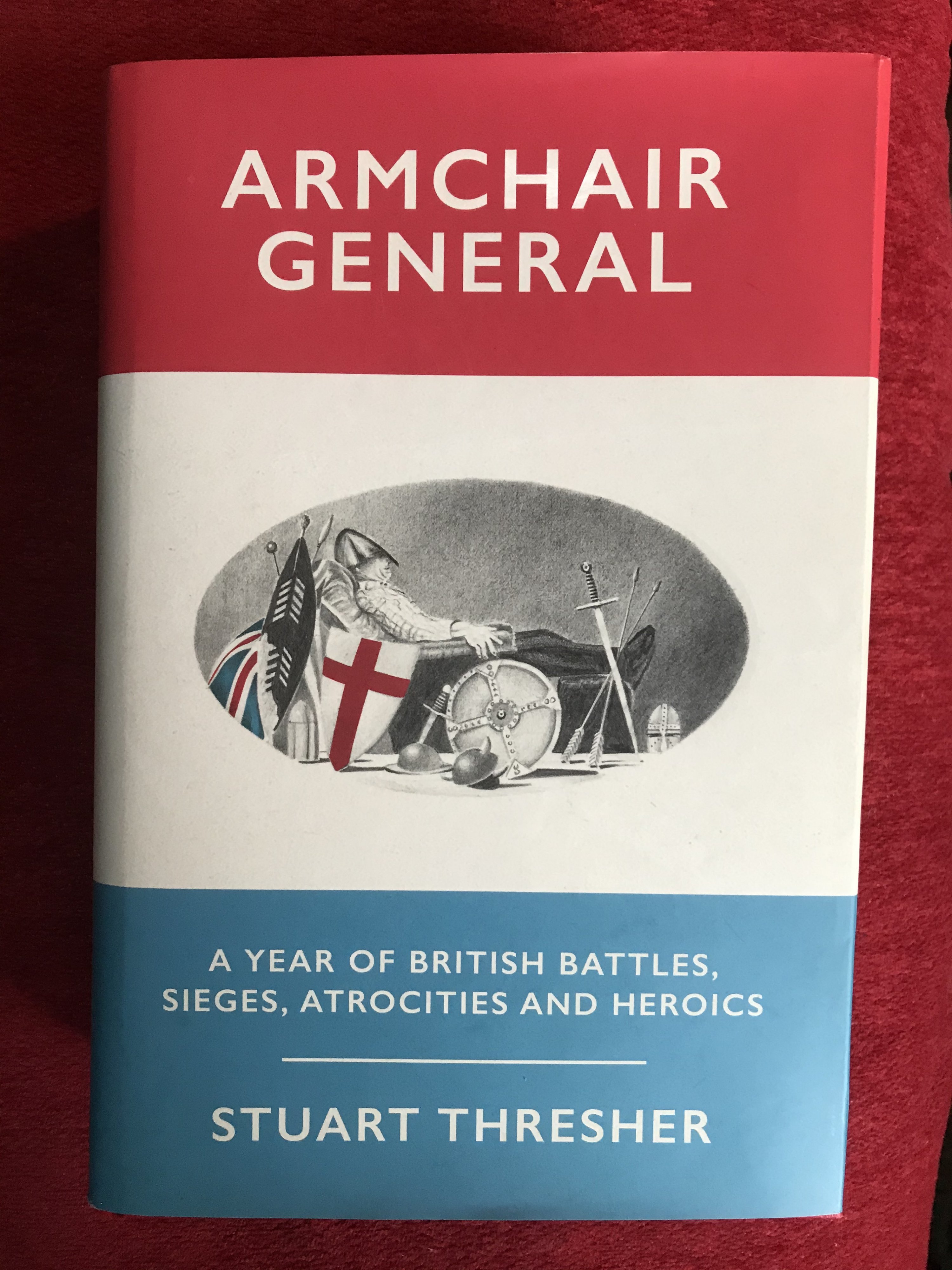 The Oath you took to serve your Country as a soldier did not include a contract for the luxuries of everyday society. On the contrary it implied hardship, loyalty, sacrifice and devotion to duty, regardless of rank. So either lead, follow or get out of the fcuking way.


At 21:00, about 100 men of the 19th Infantry moved into the hills to the east of the town.[6][28] They carried with them about 30 wounded, including several litter-bound patients too seriously wounded to walk. Some of the group of 100 were ordered to carry these men, but many of them separated from the group in the mountains.[29] By the time they reached the top of the mountain, officers decided some of the seriously wounded could not be carried any further, as their carriers were exhausted.
The regimental medical officer, Captain Linton J. Buttrey, and Chaplain Herman G. Felhoelter[31] remained behind with the wounded, intending to move them when another group of troops came through who could carry them.[28][29] Buttrey wore a Red Cross brassard identifying him as a medic, while Felhoelter wore a large white Latin cross brassard, identifying him as a military chaplain in the U.S. Army Chaplain Corps. The two who remained and the wounded were non-combatants under international law, as they carried no weapons.[32]

Death of Father Felhoelter[edit]
Buttrey and Felhoelter were both unarmed, and wore the insignias of their respective vocations, indicating their non-combatant status. Soon, Buttrey and Felhoelter heard a KPA patrol approaching, a group of men from the KPA 3rd Division which had infiltrated the US lines.[28] Felhoelter told Buttrey to escape, and although Buttrey was shot and severely wounded in the ankle by KPA fire while running, he was able to get away.[29][32] Felhoelter then began administering last rites and extreme unction to the wounded as they lay on their litters. From this point, observers from the 19th Infantry's regimental Headquarters and Headquarters Company watched through binoculars from a distance as a patrol of young-looking and possibly untrained KPA troops approached the site of the wounded.[28][29] The troops were armed with Soviet-made rifles and PPSh-41 "burp guns". As Felhoelter knelt to pray over the wounded US soldiers, the KPA troops shot him in the head and back.[29][32] They then proceeded to shoot and kill all of the thirty critically wounded soldiers with their automatic weapons before withdrawing into the wilderness.[28][29][32][33]

The attack was witnessed from hills some distance away through binoculars by other members of the 19th Infantry.
Felhoelter was awarded the Distinguished Service Cross posthumously.

Felhoelter became the first of several military chaplains to lose their lives in the Korean conflict.[34][35][36]
' Don't it always seem to go, that you don't know what you got till it's gone ? '
-----
'The role of a News provider is to provide the competing sides of an argument in a balanced way, with fact and opinion rigorously separated. ''
The Times, May 28 2020

In what would otherwise have been an unremarkable Peninsular War skirmish, the German heavy dragoons achieved the unusual feat of breaking three French squares, those of the 6th, 69th and 76th Line,[1] routing the entire French force with heavy losses.

Bock's 770-strong heavy cavalry brigade, consisting of the 1st and 2nd King's German Legion (KGL) Dragoons, led the pursuit of the French. In support of Bock were the 1,000 troopers of George Anson's British light cavalry brigade (11th and 16th Light Dragoons).[2] As the Anglo-Germans approached, Maj-Gen Curto's French cavalry fled. Foy arranged his eight battalions on a hill in square near Garcihernández in Salamanca province in Spain. He had two battalions each of the 6th Light, and the 39th, 69th and 76th Line Infantry Regiments.[3]

Bock's dragoons charged a square belonging to a battalion of the 6th Light. The French held their fire too long. Their volley killed a number of horsemen, but a mortally wounded horse carrying a dead dragoon crashed into the square like a battering ram.[4] The horse fell, kicking wildly, knocking down at least six men and creating a gap in the square. Captain Gleichen rode his horse into the gap, followed by his troopers. The square broke up and most of the men surrendered.[5][6]


For fans of Bernard Cornwell - this action formed the background to Sharpe's Sword apparently.
Last edited: 23 Jul 2020
' Don't it always seem to go, that you don't know what you got till it's gone ? '
-----
'The role of a News provider is to provide the competing sides of an argument in a balanced way, with fact and opinion rigorously separated. ''
The Times, May 28 2020


1863
– Confederate John Mosby began a series of attacks against General Meade’s Army of the Potomac as it tried to pursue General Robert E. Lee in Virginia’s Shenandoah Valley. Confederate Colonel John S. Mosby was known as “The Gray Ghost.” The rather ordinary looking Mosby led his Partisan Rangers in guerilla warfare operations that continually confounded Union commanders in the Piedmont region of Virginia. Learn more about Mosby‘s Confederacy in Faquier and Loudoun counties.

1932 – During the Great Depression, President Herbert Hoover orders the U.S. Army under General Douglas MacArthur to evict by force the Bonus Marchers from the nation’s capital.

1943 – On New Georgia the American attack continues. The present objective is Horseshoe Hill. Two Japanese destroyers are sunk by aircraft near Rabaul.

1943 – The Japanese evacuate most of their garrison on Kiska Island with being detected by American forces.

1943 – Nicosia is captured by American troops and Agira is taken by Canadians.

1944 – The first objective of “Operation Cobra” is reached by elements of US 1st Army. The US 4th Armored Division enters Coutances.

1944 – On Guam, American marines occupy much of the Orote Peninsula. Other US forces take Mount Chachao and Mount Alutom in the continuing effort to link up the beachheads.

Citation:
For conspicuous gallantry and intrepidity at the risk of his life above and beyond the call of duty while serving as platoon corpsman with Company K, during combat operations against enemy forces.
While on a sweep through an open rice field HC3c. Caron’s unit started receiving enemy small arms fire. Upon seeing 2 marine casualties fall, he immediately ran forward to render first aid, but found that they were dead. At this time, the platoon was taken under intense small-arms and automatic weapons fire, sustaining additional casualties. As he moved to the aid of his wounded comrades, HC3c. Caron was hit in the arm by enemy fire.

Although knocked to the ground, he regained his feet and continued to the injured marines. He rendered medical assistance to the first marine he reached, who was grievously wounded, and undoubtedly was instrumental in saving the man’s life. HC3c. Caron then ran toward the second wounded marine, but was again hit by enemy fire, this time in the leg. Nonetheless, he crawled the remaining distance and provided medical aid for this severely wounded man. HC3c. Caron started to make his way to yet another injured comrade, when he was again struck by enemy small-arms fire.

Courageously and with unbelievable determination, HC3c. Caron continued his attempt to reach the third marine until he was killed by an enemy rocket round. His inspiring valor, steadfast determination and selfless dedication in the face of extreme danger, sustain and enhance the finest traditions of the U.S. Naval Service.
Proud member ARRSE Vermin as per Pants'O'Flame, the turps drinking rough sleeper pigeon rapist

The attack was made at short notice to exploit the success of Operation Cobra by the First US Army after it broke out on the western flank of the Normandy beachhead and to exploit the withdrawal of the 2nd Panzer Division from the Caumont area, to take part in Unternehmen Lüttich (Operation Liège) a German counter-offensive against the Americans. 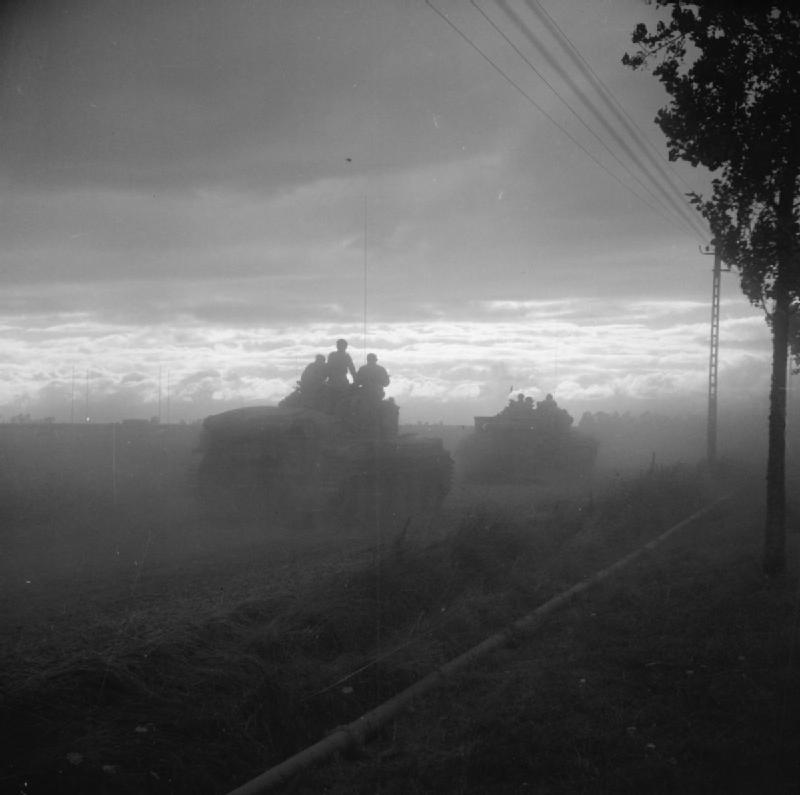 Operation Bluecoat: Cromwell tanks of the 7th Armoured Division move up in the morning of 30 July 1944


Visibility was poor but the bombers accurately placed 2,000 long tons (2,000 t) of bombs. The damage to German equipment was slight, partly because there was little of it in the target areas and because the 43rd and 50th divisions were held just beyond the start line, well north of the target areas in their sector. The advance of the left flank units of the 11th Armoured Division through "Area A" made rapid progress.[6] Many British units were held up by minefields, sunken roads, thick hedges and steep gullies but in the centre the attackers gained 5 mi (8.0 km).[7] On 31 July, the 11th Armoured Division of VIII Corps exploited a German inter–army boundary weakness, when they discovered an undefended bridge ("Dickie's Bridge") 5 mi (8.0 km) behind the German front, over the River Souleuvre.[8] Reinforcing the opportunity quickly with Cromwell tanks followed by further support units, they broke up the first German armoured units sent to counter-attack.[9] British forces advanced to about 5 mi (8.0 km) short of Vire by 2 August, which was on the American side of the army boundary. There was confusion as to who had the rights to use certain roads and the British attack was restricted and diverted south-east. The 7th Army was able to reinforce the town with troops from the 3rd Parachute Division, which was being forced south by the US V Corps and to move elements of the 9th SS Panzer Division south-west to close the gap between the 7th Army and Panzergruppe West.[10] 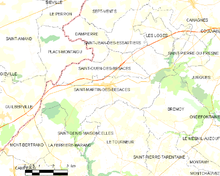 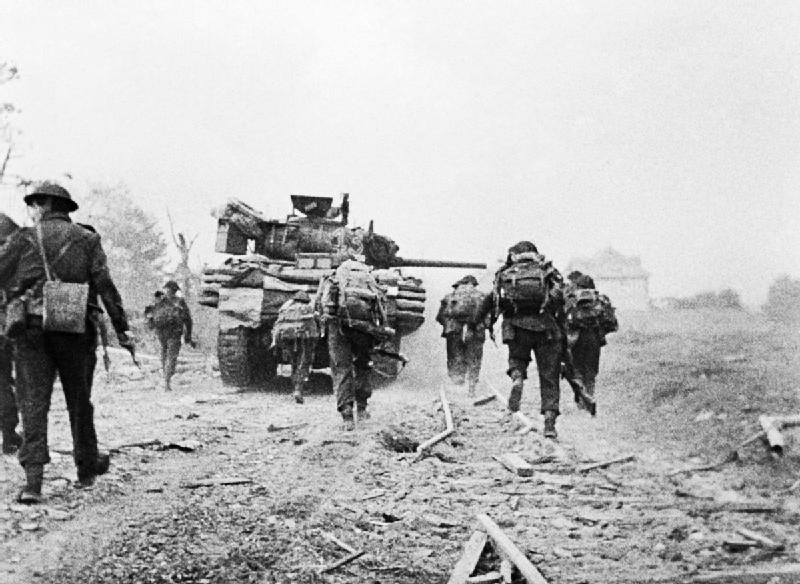 1944
– The advance of US 1st Army continues. On the left flank, the US 19th Corps approaches Torigny and Tessy. The 7th Corps reaches Percy. On the right flank, the 8th Corps crosses the Sienne River and moves toward Granville.

1944 – On Tinian, the American forces now occupy more than half the island. Japanese resistance is increasing.

1944 – On Biak the last pocket of organized Japanese resistance, around Ibdi, is eliminated. On the mainland, near Aitape, American forces fall back at Afua under pressure from Japanese forces.

1945 – An Allied naval bombardment 5 battleships and several cruisers and destroyers targets the aircraft factories at Hamamutsu in southern Honshu.

1950 – As the U.N. forces formed the 100-mile by 50-mile Pusan Perimeter, Lieutenant General Walton Walker issued his controversial “stand or die” order to Eighth Army, declaring, “there will be no Dunkirk, there will be no Bataan.”

We are fighting a battle against time. There will be no more retreating, withdrawal or readjustment of the lines or any other term you choose. There is no line behind us to which we can retreat.…There will be no Dunkirk, there will be no Bataan. A retreat to Pusan would be one of the greatest butcheries in history. We must fight until the end.…We will fight as a team. If some of us must die, we will die fighting together.…I want everybody to understand we are going to hold this line. We are going to win.
Proud member ARRSE Vermin as per Pants'O'Flame, the turps drinking rough sleeper pigeon rapist

1864
– The Union’s ingenious attempt to break the Confederate lines at Petersburg by blowing up a tunnel that had been dug under the Rebel trenches fails. Although the explosion created a gap in the Confederate defenses, a poorly planned Yankee attack wasted the effort and the result was an eight-month continuation of the siege.

1945 – Japanese warships sink the American cruiser Indianapolis, killing 883 seamen in the worst loss in the history of the U.S. navy
Proud member ARRSE Vermin as per Pants'O'Flame, the turps drinking rough sleeper pigeon rapist
You must log in or register to reply here.