I was initially uncertain about this book, as it looks like it's a coffee table book but was pleasantly surprised by the content. The book is a large format, 8" x 11" and slightly over an inch thick on high quality paper.

The author is a relatively young French journalist states that the book is intended to record the stories of the various personnel before they are forgotten. Given the effort involved in the author meeting many of the living subjects this book is obviously something of a labour of love.

This book is a collection of stories of a range of soldiers (Army with a few Air Force, and Marines, but no naval personnel) all of whom served in WW2. Each story is about 4 pages covering the war in chronological order from the invasion of France until the Japanese surrender. The stories are put together from correspondence collected by the author and knitted together to form a coherent tale. Soldiers come from primarily French, British and American forces with a small number of Canadians, Aussies and NZ but also includes a few "oddments" including the civilian entertainment troupe. 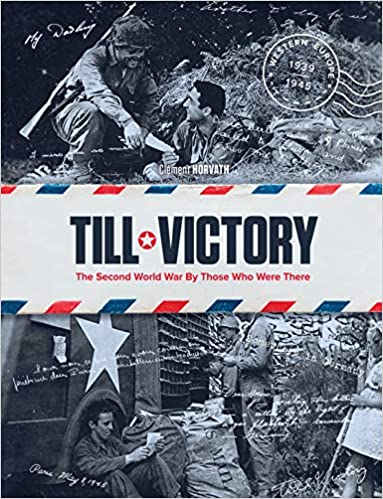 The various theatres of the conflict get a short introduction including synopsis of the overall situation with relevant maps and diagrams before the individual personal stories relating to that theatre. Each section is liberally illustrated with a variety of pictures including reproductions of letters, telegrams, pictures of various equipment, uniforms of the time and a photo of the subject.

The sections are well written and contain quite a lot of detail which people younger people will not be aware of. For example, the difficulty in communicating between service personnel and their loved ones in particular and the various types of mail messages, including ones sponsored by Kodak which were microfilmed, flow back to the US and then printed from the microfilm. Mail was not a transport priority and often would not be received for several weeks as units moved around, and of course would not arrive at all if the ship was sunk or the aircraft shot down.

Many of the stories are fascinating and give an insight into the different attitudes of the time, particularly one letter where the death of a brother in service is dealt with in a most matter of fact manner. Quite a few of the stories are extremely sad when you realise that the subjects died in their teens or early 20s.

​
Conclusion:
A well researched and thoughtfully written book with a lot of detail of life in wartime which will not be apparent to the modern or younger reader. The way the book is structured means that it's possible to dip in and out reading one campaign or story at a time.

If you are interested in biographical stories then this book gets the full 5 mushrooms.

So glad Google Alerts got me here, I'm very honored that you took the time to read my book, that you seem to have enjoyed it, and that you talk about it! Thank you so much!

It is indeed a labour of love that took me nearly 15 years to complete (collection, research, writing and design), so as it was just released in the UK, I'm looking forward to reading the first reviews and I really enjoyed reading yours. However I just wanted to point out that there are actually a few naval personnel in the book (at least two British and one American), in the chapters about training, the Battle of the Atlantic and the landing in Sicily, but they didn't get the full 4-page portraits for two main reasons: it seems that the Navy was extremely strict as far as censorship was concerned (so not much interesting content in the letters), and, I wasn't able to find any living relative for them. Because that was a huge part of the work: for each soldier that I wanted to honor (and whose letters I had found on eBay), I needed to find a direct descendant to ask for permission to publish the correspondance and learn some more about the veteran. It's a long and difficult task but it's worth it as the families are always very happy about it and some of them are now good friends of mine! Still, for some of the men and women in the book, it was a dead-end, so I only disclosed their first name and division or ship (although there are about fifty fully-identified servicemen in the book), that's why they probably were unnoticed.

If you're interested, I have a podcast in English (with an amazing French accent) on all the streaming platforms called "Till Victory (a podcast about WWII and peace)", where I interview WW2 veterans

Thanks again for the nice words and have a great day!

Book Reviewer
Thank you Clément, I did indeed very much enjoy the book, which is a fine piece of work.
Reaktor Bolshoy Moshchnosty Kanalny