The Sky at Night

RigPig said:
The comet taken this morning on the phone. Maybe I should go somewhere more scenic next time.
RP

We've got threads for cats, dogs, birds, etc. Why not a thread (that I can find) for things in the night sky?

Zero Alpha and I love sitting out and watching stuff in the sky. She's been following the comet, hoping for a clear night. Last night we decided it might be clear enough. Checked this page:

Which Planets Can You See Tonight? (other cities are available). There's a link at the top with a very useful sky map than can be rolled forward with time and date.

We walked over to the recreation field to get a relatively clear horizon (because the comet is permanently right behind the sun) and to get the bulk of the light pollution behind us. The website told us that as twilight progressed the comet would go from not visible to very good. Standing for ten minutes would allow the dark to develop and our night vision with it.

We were joined by a retired merchant seaman walking his dog. The former wanted to lead the searcb. Not very well. We turned and looked behind and managed to fluke the ISS

See the International Space Station! As the third brightest object in the sky the space station is easy to see if you know when to look up.

It was Zero Alpha's call. We went home. I got the tablet, pulled up the sky map, and by now Ursa Major was clearly visible, so I knew where to look. Back to the field. It still wasn't fully dark (we're only three weeks past the solstice) but now I knew exactly where to look under Ursa Major, 15° (a fist and a half above the horizon, good old fieldcraft — and the NASA site above). Described how to "look off" (fieldcraft again) to Zero Alpha and Alien Minor 2, who was also tagging along.

What have you seen in the night sky? What do you look out for?

Was this New Neowise, I read that it was hard to spot.
ethics are like erections: No matter how well intentioned they might be they are prone to sudden deflation.

I use the SkyView app, which also shows ISS, satellites etc - a touch like Flightradar24 - so that I know where to point my telescope.
We’re lucky we live at the edge of town, with virtually zero light pollution, so I set the ‘scope up on the bedroom balcony.

philc said:
Was this New Neowise, I read that it was hard to spot.
Click to expand...

Very hard to spot. I only spotted it second time because I knew exactly where to look and how, thanks to fieldcraft from my time in reconnaissance, to look just past where I'm meant to be looking, and up it popped in my peripheral vision.

Merchant seaman (see OP) told us his daughter could see it clearly through a cheap telescope. Following his directions, we were barely looking in the right quadrant. I knew he was a navigational walt when he directed me toward Venus, about 160° from the sun. Probably Jupiter. Any fuel no Venus orbits inside us and is therefore always either just ahead of, just behind or hidden by the sun.

Trackpen said:
I use the SkyView app, which also shows ISS, satellites etc - a touch like Flightradar24 - so that I know where to point my telescope.
We’re lucky we live at the edge of town, with virtually zero light pollution, so I set the ‘scope up on the bedroom balcony.
Click to expand...

At Beaulieu last year, evicted from house while new central heating pipework went in, we visited the SOE museum there. On display was a Luftwaffe map of Southampton from about 1940, from a downed bomber. First thing I did was look for our house (even though our neighbour, when we moved in in the 80s, told how the estate was built on the site of a pig farm in the 60s).

The now main road through the estate was clearly the 1940 town boundary. It was all fields beyond (mercifully the first few acres remain a sports field. We're separated from the sports field by a new link road to the M271). If only it were ever thus. But no, they're filling in the gaps between us and the M27 with ever more housing. Sooner we move somewhere dark, the better.
Last edited: 22 Jul 2020
Join an active Arrse Torn faction? Visit this page. www.torn.com/1954662​
Emsdorf and victory!

I use an App called ‘Sky guide’. It’s good. You simply point it at the sky & it tells you what you’re seeing. Even debris & old spent rockets that have been orbiting for 60 odd years.
It also has a search function, so you can search, say ISS & it will tell you when it’s next overhead, what direction & what time.

My photo was comet Neowise. The daughter was desperate to see it so we got up at 01:00. The wife saw it first, but she’d gone out before me. We are lucky that we live on the very edge of town. We knew where to look, I’ll see if I can find a link and post it later.
I have a couple of pictures of the star link rocket going over our house. That was fantastic watching it take off on the tv and then see it go over 15 minutes later. Again I’ll add some pictures later.

I’ve got work to do now before I get told off by the Mrs.

RP.
This place would be a paradise tomorrow if every department had a supervisor with a sub machine gun.

As I've been deliberately avoiding the news since shit-storm 2020 kicked off, I wasn't even aware we had a comet in the neighbourhood. Cue 10/10ths clag for the next month. I doubt it'll be anything as spectacular as Hale Bopp, but any visitor has got to be a welcome sight.
Fred Astaire ate my hamper.

I'll not add much if only to say that I'm lucky to have lived in a number of decent 'dark sky' areas and the only time I've experience 'awe' in it's truest form is when you're deep in the Arabian desert, you walk away from the fire and the camp, far enough away to lose the sounds, lie back and close your eyes for 15 minutes.

Humbling and a simple way to have perspective presented in the way that only nature can.

It must be similar on a boat in the oceans.
W 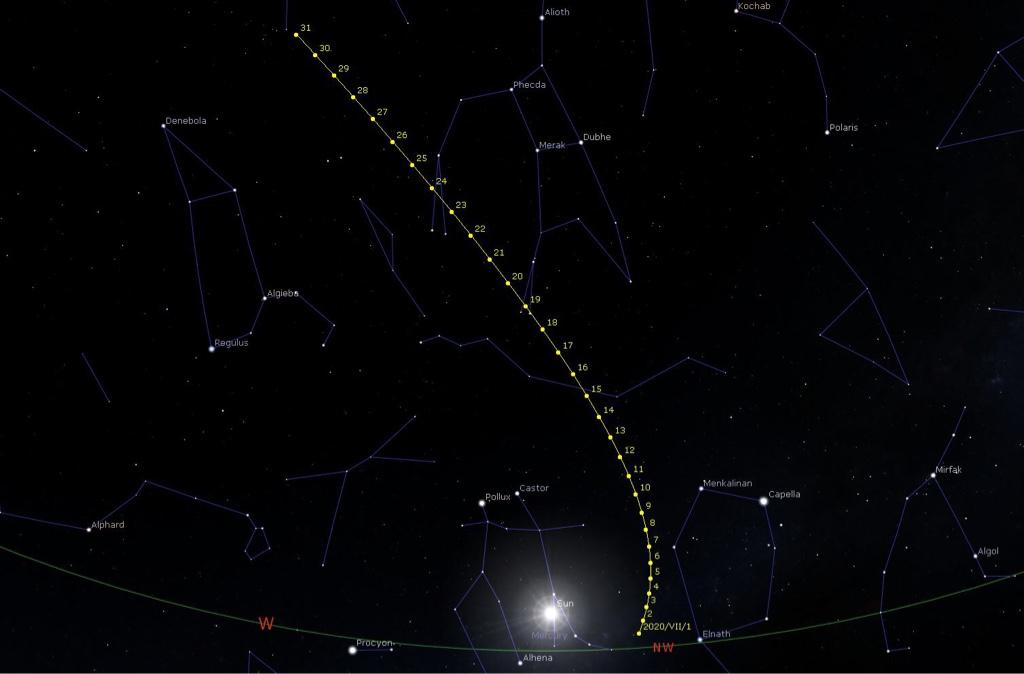 This gives an indication of where it should be found. 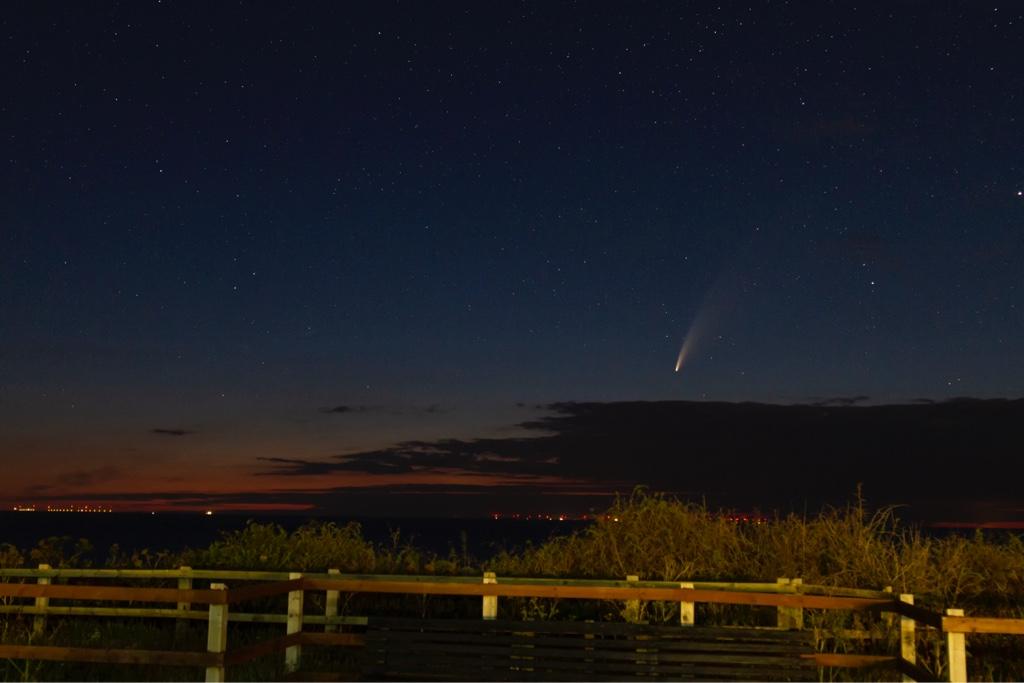 And the view from Cromer earlier this month

Early Spring when we had that blocking anticyclone allied with clear northerly air and the decline of air traffic all combined to give us some fantastically clears night skies.
The ISS being visible at a reasonable hour got the kids and some mates kids all looking out for it..
We were on joint phone calls, daughter shouts "there it is"....
"Oh there's another, there's three........"
Turns out it was a night a string of Starlink satellites were on a similar trajectory..
They counted thirty odd that night..
Many telescopes have been bought since!

Unfortunately we get banks of cloud stacking up this side of the Pennines, and the North West of England has quite a large urban light pollution, but it seems I can't go outside without seeing the ISS.
Twice in the last week, while out checking on a maternal coos at stupid o clock I just happened to look up whilst answering a call of nature....

Yet try and set up a newbie to see it, and it often ends in disappointment.

This link will show where to find the comet. 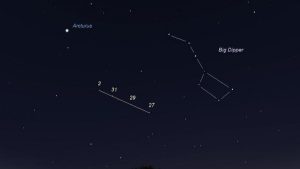 How to see Comet NEOWISE | EarthSky.org

A few observers in the Southern Hemisphere are beginning to capture Comet NEOWISE, too. Charts here for seeing the comet in late July and early August.

This may also be of interest

Just sitting outside with a pair of binoculars at night will show so many more stars and satellites than you can see with the naked eye. I’ve seen 3 satellites in a triangle formation go past. I think they were some form of maritime navigation system. I use a pair of Opticron 10x50s
RP.
This place would be a paradise tomorrow if every department had a supervisor with a sub machine gun.

It finally cleared up here about half an hour ago (0230hrs), so went out for a look and got a great view, although it was as low as it could possibly be, just above the horizon and directly beneath the Pole Star, with the tail pointing straight up. It's climbing back up now, but it's fading as the horizon's starting to lighten. Still pretty bloody epic to see it. Should be good later in the week.

Got up half an hour ago to see it just as a bloody big cloud bank arrived
No sign of it clearing anytime soon either.
The universe doesn’t care what you believe.

Speedy said:
Got up half an hour ago to see it just as a bloody big cloud bank arrived
No sign of it clearing anytime soon either.
Click to expand...

It's already faded here, due to the glow on the horizon.

AlienFTM said:
We've got threads for cats, dogs, birds, etc. Why not a thread (that I can find) for things in the night sky?
Click to expand...

I used the search term "the sky at night".
"Hurrah for the Works Group" just doesn't have the same ring...

Australia must be pretty boring, I remember seeing lots of Satellites over the U.K. 30 years ago, last camping trip me and the boy saw 2 within 5 minutes and then no more.

Australia must be pretty boring, I remember seeing lots of Satellites over the U.K. 30 years ago, last camping trip me and the boy saw 2 within 5 minutes and then no more.
Click to expand...

Funny you should say that. Friday night we walked across to the field. The estate was lit up like day (partly why we were walking to the field. Thanks Southampton City and SSE. That and to get a good horizon). There was a young, obviously loving couple (NOT coupling) she was very drunk shouting "I love you" down the phone.

Got to the field, saw the comet, walked back. I looked up and saw what definitely looked to me like a satelli. But flying East - West. Never ever seen that before. Sent directions. Zero Alpha and Alien Minor 2 looked up and agreed. Then out of the side alley came this couple again, who turned and followed the indicating arm. "Ooh, a satellite!"

Something of a non-sequitur.
Join an active Arrse Torn faction? Visit this page. www.torn.com/1954662​
Emsdorf and victory! 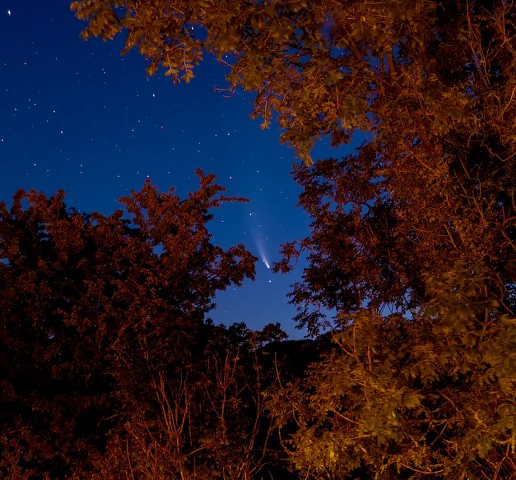