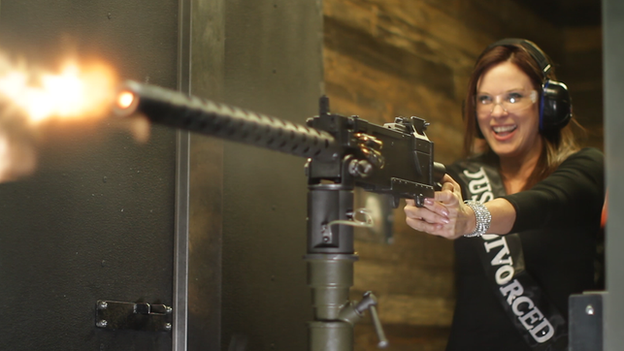 After finalising a painful divorce Wendy Lewis decided there was only one way to celebrate - by blasting her wedding dress with a machine gun.
To get the job done the newly divorced American gathered her female friends - and the dress - and flew to Las Vegas, Nevada for a long weekend.
Upon arrival in Vegas the trip to a shooting range was arranged by a small firm at the forefront of one of the city's fastest-growing business sectors - divorce party planning.
And while what happens in Vegas is supposed to stay in Vegas, the planner in question, Glynda Rhodes, 51, is happy to take up the story.
"Ms Lewis had never picked up a gun before, but she brought her wedding dress into the shooting range and hung it up," she says.
Ms Lewis' wedding dress after it was shot
"Oh if you could have seen the look on her face when she was shooting at her dress. You could just feel that she was letting all that anger out."
A long-established Vegas-based events planner, Ms Rhodes was historically more used to organising bachelor and bachelorette parties (stag and hen dos) for the hordes of young Americans who fly into the city for one last celebration of single life.
Yet with more than half of marriages in the US now ending in divorce, including her own, Ms Rhodes started to receive a growing number of inquiries from people - both women and men - wishing to celebrate the end of their wedlock.
So in 2012 she launched a new company - The Divorce Party Planner - and the business has boomed ever since, a situation mirrored at similar firms in Vegas and across the US.
In addition to the visits to shooting ranges, a popular option called "Glocked and Loaded", Ms Rhodes arranges for divorce parties to get entry to nightclubs, get tables at restaurants, play rounds of golf... or visit strip shows.
She also organise skydives for people who want to "jump right back into being single".
Click to expand...

I would like to do that, but with my ex wife still inside the dress

No1 dress for best man/men

The path of self destruction. Why can't some blokes avoid it?
3 4 5