The quiet death of the Royal Canadian Navy

Guns said:
MV Astrix the temporary Oiler for the RCN.
Click to expand...

Wow! quite a find - even if not exactly defense...I don't know what the stats are but will take your word for it.

The source of my link is this Italian Journo,


I elected for the article rather than the tweet, because as you can see from his argument in the thread he is being decidedly snide and disingenuous about the whole thing.

With respect to "twice the going price" for the frigates, at the last minute Fincantieri changed their offer to claim to be able to provide the Italian FREMM for half the cost of anyone else, but only if the rules of the competition were re-written to favour them. They made this offer as a parting shot just before walking out of the bidding.

Nobody believed Fincantieri's numbers then, and the PBO's original estimates were reasonably close to those of the government. The PBO's cost model is based on the known costs of existing ships in other countries (and not the T-26), which I would think make it pretty much the definition of "the going rate".

The PBO got their cost model from an international management consulting company by the way, they didn't come up with it themselves. They don't take their marching orders from the government either, as the government have their own budgeting staff. The PBO exist to provide independent reports to parliament so they aren't likely to be fiddling their numbers.

If Fincantieri could genuinely build ships for half the cost of what other countries are paying then the world would be beating a path to their doorstep, which they're not.

A more likely explanation is that the journalist in question is repeating what he's been told by Fincantieri (who put a lot of effort into press relations in the Canadian bid as well) and that their numbers are more the product of creative accounting than of actual reduced cost.

The Ivar Huitfeld class was one of the early contenders in the competition in Canada. They too supposedly were very cheap. However, as noted either in this thread or a related one, it turns out that a large share of this cost saving was simply the product of a different accounting system where the cost cited was simply that of the hull, engines, and basic outfit, while all the war like stuff came from a different budget. The ship builder just delivered a bare ship and the Danish defence ministry had other companies contracted to turn it into an actual warship. That's just the way they did things in Denmark.

I don't know what Fincantieri did to reduce the "cost" of their ship as offered to Canada, but I seriously doubt that the actual final cost to the DND would have been significantly less.

Fincantieri are currently bidding on the US frigate program and I suspect that any PR coming out of them for the next while will be intended to promote their prospects with respect to that project and denigrate the offerings of their competitors. At the time that they walked out of the Canadian competition I seem to recall they were talking up their prospects in the US and saying how Canada was going to regret not going with a winner (themselves). Meanwhile Canada and Australia have picked the T26 and the US frigate program is wallowing and taking on water.

When looking at the projected cost in Canada, keep in mind that this is a build program that extends from the early 2020s out to around 2040. Much of the cost is simply the result of projected inflation between now and 2040. And this isn't just "normal" inflation. this is "defence inflation", where defence costs are estimated to increase at a rate greater than normal inflation due to the increasing sophistication and capability of the equipment.

Nobody really knows what the actual final cost will be, but by applying similar assumptions to all the offerings we can get comparisons between different defence options. The government are fairly sanguine about the cost, as it will be spread out over decades. I haven't so far noticed much if any concern amongst the public over the cost of the frigates. The biggest concern is actually about getting construction started on time and avoiding delays.
NULL

Here's another story about the new frigates, this one is about "requirements reconciliation", which is the process of nailing down the final details about what goes into the actual ships and how this affects cost.
www.cbc.ca/news/politics/frigate-type26-navy-requirements-reconciliation-procurement-1.5185554?cmp=rss

Civilian bureaucrats and military planners call it "requirements reconciliation." And even hardened military observers and procurement geeks will have a tough time getting excited about this laborious line-by-line review of Lockheed Martin Canada/BAE Systems' bid to design the navy's new frigates.
What is important — the reason why taxpayers should be paying attention — is the fact that with the stroke of a pen, hundreds of millions of dollars could be added to, or subtracted from, the cost of Canada's next generation of 15 warships.
Click to expand...

This is being done at this stage in the project because these sorts of details can't be finalised until the actual ship has been chosen. If the two sides can't agree, then the government has the option to bin the T26 decision and go back to one of the losing bidders to try again with them.

Basically, this is the final chance for the government to shave some of the cost off the ships.

The reconciliation phase is, from the navy's point of view, the crucial period when a designer's promises of performance and capability are (or are not) turned into engineering reality.

It's also the time when sticker-shocked governments seek to put curbs on the amount of pricey equipment that gets bolted to the hulls.
Click to expand...

The DND are using the opportunity to look again at some of the requirements to see what they really need and what they can do without.

"We have a fairly good understanding of the areas we are looking at," said Pat Finn, a retired rear admiral who heads the Department of National Defence's procurement section.

Finn said that in some cases, the Department of National Defence is "re-looking at some of the requirements" the navy set for its warship.
Click to expand...

I also suspect that some requirements trade-offs may be made here which reflect how views may have changed about what is needed since the time when the original requirements were laid down.

More importantly though, since the UK and Australia have also selected the T26, this is a chance to look at how to reconcile some of the Canadian requirements with what those countries are doing in order to make the final detailed design more similar to theirs. This would mean less redesign of the ship, saving money, and just as importantly, time, in order to keep on schedule.

But Finn's remarks do raise the question of whether the navy — and, by extension, the country — will get the warship it needs.

In addition to the U.K. and Canada, Australia also is in line to buy and build the untested warship.

The line-by-line review will, among other things, look for common requirements and design points among the three nations, said Finn.

The RCN are a the table in these discussions and sign off on any work.

Asked directly whether the navy will get the warship it wants, Finn was categorical in his answer: "We will ensure the navy gets the ship that it needs and the navy is at table with us. The changes and the work we do is signed-off by them."
Click to expand...

The government are under great pressure to ensure that the build gets started on time in order to avoid having a gap at the shipyard between the existing classes of ships and the new frigates. When the current government came to power they made the decision almost immediately to change the project to be more off the shelf with less customisation, specifically to avoid delay and cost.

Personally, I consider it to be a positive sign that Canada are looking at what the UK and Australian are doing and trying to achieve a more common design as this will affect not only near term cost and timing, but also upgrades and maintenance over the longer term.

Something not addressed in this story is that the first three ships will be an air defence and command version, while the following twelve will be ASW/GP versions. There were some earlier reports several years ago of some disagreement within the frigate program as to just what level of capability these first three ships should have. Some were advocating for top end ships capable of commanding a major battle group, while others were looking for something more modest in ambitions.

There has been no news since as to what, if any, decision has been made in this respect. If this debate is somehow still active then some news about it may leak out into the press.
NULL

Here's an interest video about some officers from Canada's future AOPVs (Arctic OPVs) getting some hands on training and experience from the Canadian Coast Guard operating in the Arctic. The video was shot last October, which would have been during minimum annual ice conditions.

It's very much worth watching as they briefly discuss some of the technical aspects of operating in ice. The Arctic scenery of sea, ice, and mountains is lovely as well.

This video is from about a month ago, and shows the first AOPV, the future HMCS Harry DeWolf, beginning sea trials.

terminal said:
This video is from about a month ago, and shows the first AOPV, the future HMCS Harry DeWolf, beginning sea trials.

Apt that the video displays the ship "hard over"
Why do Albertans wear ball caps... to keep the sun on their necks where it belongs.

This news story is based on a leak from an unidentified "defence industry" source who slate the choices of radar, guns, and missiles for Canada's new frigates. I take such criticism with a very large grain of salt, as we have seen previous examples were losing bidders were using press leaks to rubbish their competitors and claim that their own product is superior. Given that there are billions of dollars at stake this shouldn't be too surprising. The story points at Raytheon as one likely suspect for the anonymous leak.
Industry briefing questions Ottawa's choice of guns, defence systems for new frigates

What is interesting is that it gives us an idea of some of the equipment has been chosen to equip the frigates, details of which have been very sparse in the press so far.

These include:
There will be two versions of the frigate in service, 3 air defence and command ships and 12 ASW ships, and it's not clear if the above will be fitted to all 15, nor does it mean that other missiles will not also be included.
NULL

The United Kingdom first developed these camouflage patterns in World War I to try to make it harder for submarines to engage its ships. 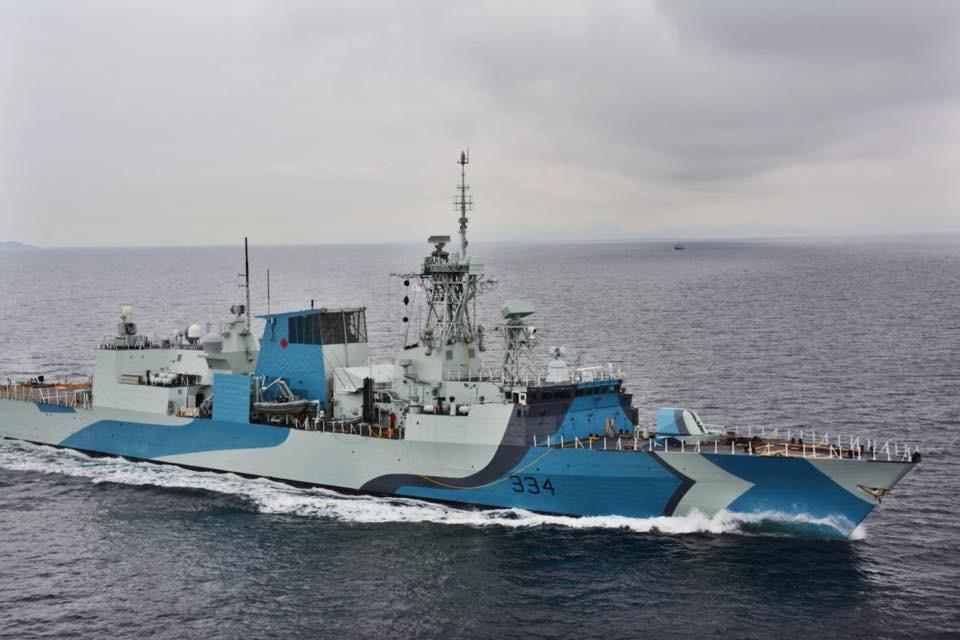 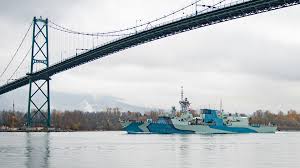 http://www.arrse.co.uk/intelligence...hment-colonial-kenya-bibliography-thread.html
You must log in or register to reply here.