The Power and The Glory by Steve R Dunn

I don’t suppose that many people are given the opportunity to write a review about reviews, but this is an opportunity which I am glad to grasp with both hands - or perhaps, to draw on the old maxim, “one hand for myself and one for the ship”. Why? Because this is a surprisingly weighty tome for its size, coming in at two and a half pounds I believe due to the top quality paper on which it is printed, but nevertheless an encouragingly straightforward read, chronicling as it does in a very readable form the progression of naval reviews from their earliest form to the very latest.

It is probably helpful at the outset to explain exactly what what a Fleet Review is, drawing on the author’s own words, namely “…that it is a gathering of ships of the Royal Navy in honour of, and to be observed by, the reigning monarch or his or her representative. Such a review has certain essential characteristics, especially: the British monarch or delegated royal personage is present; the assembly of ships represents a sizeable portion of the Royal Navy’s resources; and it is a public spectacle.”

But in reality they go much deeper than that. They present a stage for a range of objectives: from impressing a potential enemy or ally, preparing for war, celebrating a victory, to seeking nationalist support or, as probably best known by people in recent times, marking a coronation or jubilee. That said, public perception of the navy, interestingly but rather sadly, was clearly much greater in the 19th and 20th centuries than it is today

All these great events are described in absorbing detail, from the first review King Edward III carried out the first recorded review at Portsmouth and Spithead on 28 June 1346 in the run up to the Battle of Crecy to the Trafalgar 200 Fleet Review in 2005.

In the excellent preface, complemented at the end by 13 useful appendices the author goes out of his way to emphasise that the book is neither a work of reference nor a textbook, but it certainly goes a long way towards the former if not - thankfully some would say - the latter. Well indexed and well illustrated with contemporary paintings and photographs it, neatly set off with endpapers displaying a chart of the July 1914 so-called Fleet Assembly at Spithead from 15 to 20 July 1914, intriguingly only days before the Great War erupted. 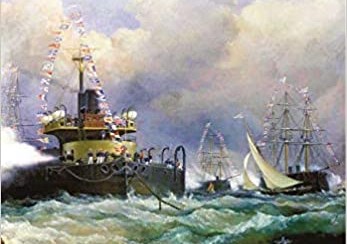 There are flashes of humour too, such as when, at the Royal Fleet Review of 1873, a baroness was presented to the Shah of Persia, allegedly “he looked closely in her face, and then, summoning up the only two words of French he knew, exclaimed ‘quelle horreur’”! One would like to think that he actually said ‘quel honneur’.

Recalling the recent conjecture concerning the potential building of a new royal yacht to succeed the much lamented HM Yacht BRITANNIA, now preserved alongside at Leith, royal reviews ideally need royal yachts rather than any Grey Funnel Line stand-ins, and the author obliges with a very interesting chapter about the 83 such vessels which have been commissioned since 1660, when King Charles II started the fashion when no fewer than 24 royal yachts or despatch vessels were built between then and 1688.

There’s even a reminder that BRITANNIA was the last ship in the Royal Navy where the ship’s company slept in hammocks, which inevitably reminds me of the old tale of a young Prince Charles visiting the quartermasters’ mess for tea. He decided that the leading hand of the mess, Nobby Clark, who had had the middle watch and was therefore entitled to a make and mend or afternoon off, should be roused up out of his hammock. Undeterred by the other mess members recommendation that he should desist, the young prince gave Nobby’s hammock a hearty shake, only to be rewarded by a very cross Nobby popping up out of his ‘mick and saying, “Charles, if you want to live to be King, b****r off!”

If there is a sad side to this absorbing book, then it must surely be what I can only and reluctantly describe as the absence of a royal yacht since 1997, and the decline and fall of the Royal Navy since much the same time. And yes, there’s a chapter about that too, and very perceptive it is. Curiously enough, the very last sentence of chapter 16 quotes Admiral Lord West, who masterminded the Trafalgar 200 Review, airing his views on the Government’s “seeming inability or unwillingness” to respond robustly to Iranian antics in the Gulf. In September 2019, he wrote in the Spectator, “the desperate shortage of frigates in the navy is a problem. For such a great maritime nation as ours to have only thirteen frigates is a national disgrace”. Compare that with the yardstick of the Naval Defence Act of 1889 by which the Royal Navy was always to be kept to “a standard of strength equivalent to the next two biggest navies in the world”. In the immortal words of Buddy Holly, “That’ll be the day”.

Time to dust off the doubtless apocryphal tale of the Silver Jubilee Review in 1977, with everyone “standing by to stand by” for hours on end and suddenly, on the tightly controlled Fleet Review radio net, someone with finger trouble accidentally pushes the press to transmit button and is heard to say in a very bored voice, “God, I’m pissed off”. Immediately the gruff tones of the Chief Yeoman of Signals in the Fleet flagship, HMS ARK ROYAL, cut in with “Unknown station identify yourself!”, followed after a brief pause for thought by “I’m not that pissed off….”!

This review started with a mention that this book was quite heavy, and at the cover price of £29.99 it is also quite expensive. However, it’s very well written, well researched, and definitely well worth consideration by those who have an interest in history, especially naval history. In summary, a very entertaining and enjoyable read, by no means heavy going so, if and when your local library deigns to reopen, it’s well worth asking them to obtain a copy. If you have got this far and decide to read the book, you won’t be “that pissed off” either, and you’ll certainly be better informed too.

In a final nod to the author, Steve Dunn, with some 10 published books concentrating on the Royal Navy, particularly during the early part of the 20th century, it is very pleasing to see that “This book is dedicated to the men, women and boys of the Royal Navy, past, present and future”.

There has not been a review of the Royal Navy since 2005, the Trafalgar 200 Review , not even on the occasion of the Diamond Jubilee in 2012, so let us hope that there will be one in 2022, Deo volente, preferably accompanied by a Splice the Mainbrace for all the current men and women, if not the boys! Incidentally, who knew that the first known such alcoholic celebration was only as recently as 1899?

To conclude in the author’s own words, “….the story of Royal Fleet Reviews is a history of the Royal Navy and the United Kingdom in miniature….” and he has succeeded superbly in condensing that fascinating history and putting it into print.

First in Last Out.