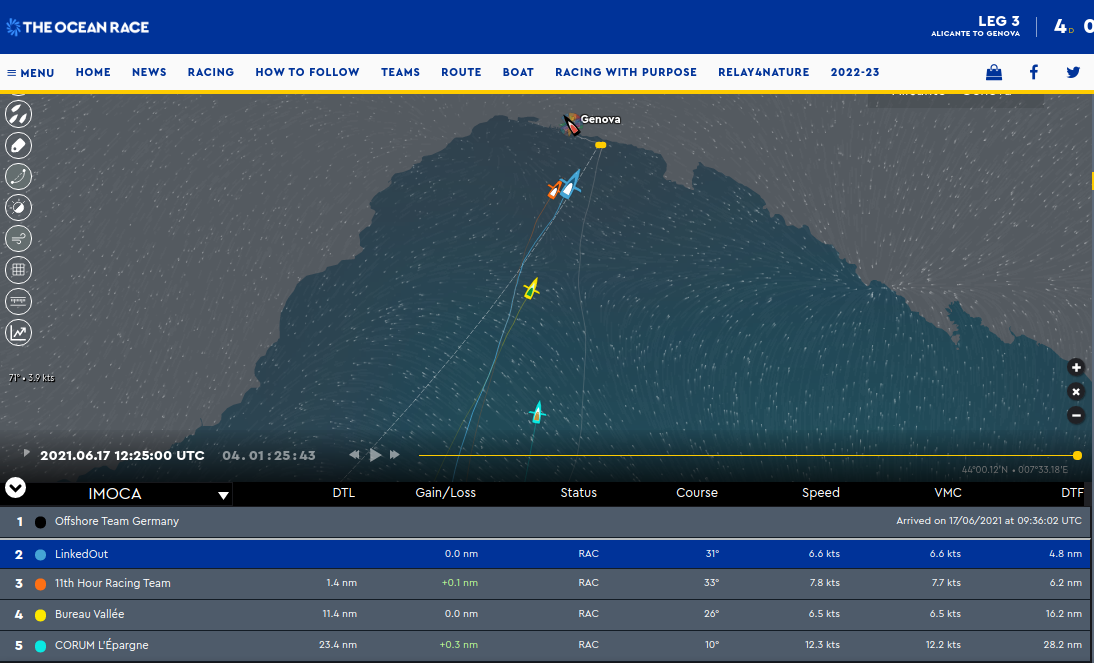 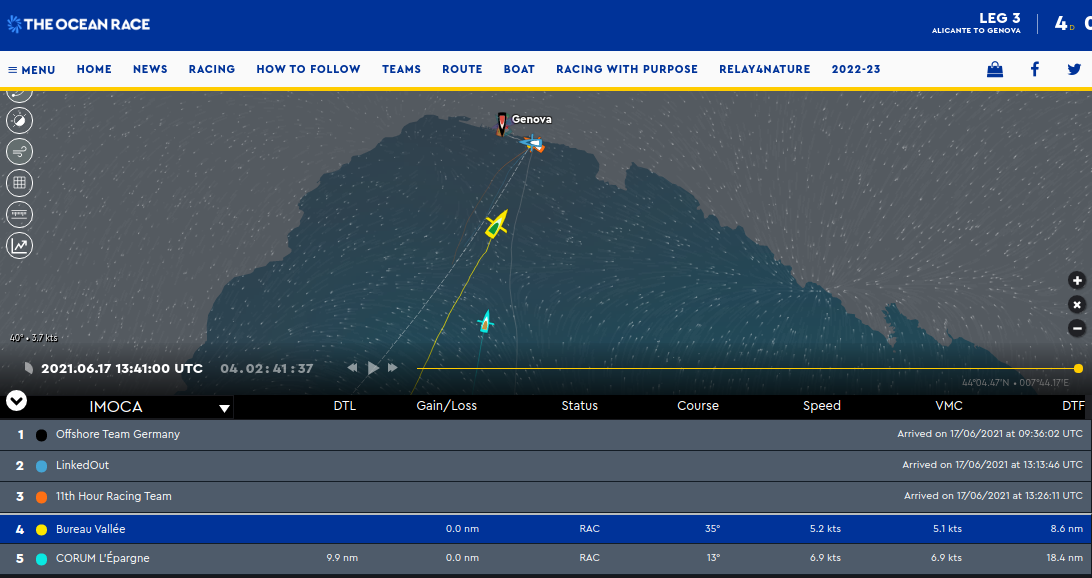 I tried linking to a live stream but it turned out to be a recording of earlier finishes which was quite frustrating at the time. We should get highlights later anyway. Managed to watch 11th Hour Racing live this time. The linked video seems to be compiling as they add new finishes.


Bureau Vallee should be next to arrive by 5pm. CORUM L'Espargne has 18 nm to go yet so should arrive during the evening. 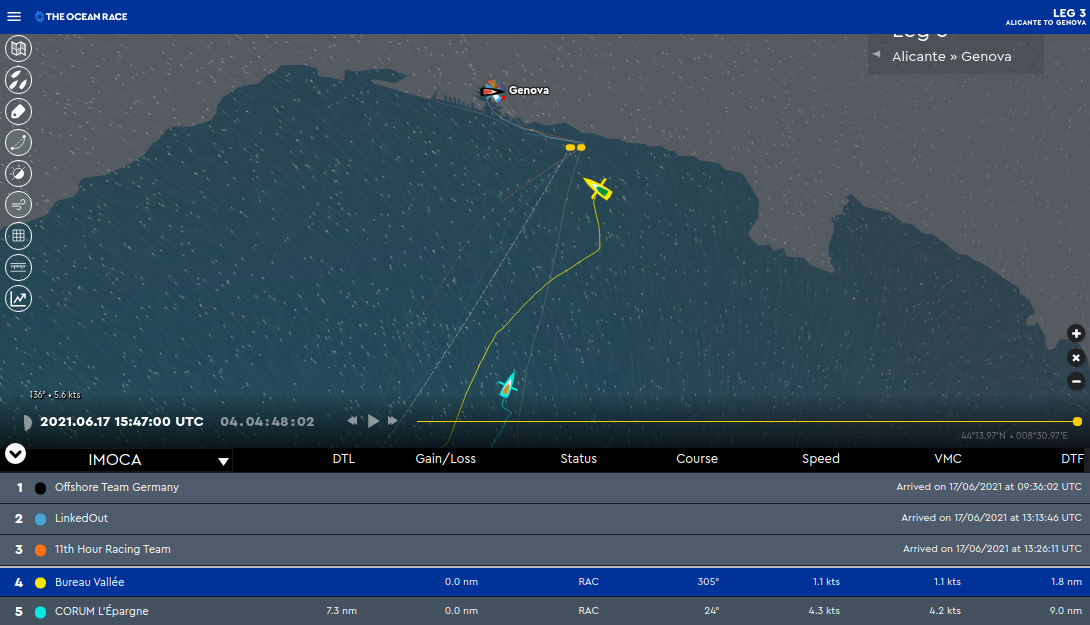 Umm... What class of boat are we? Will they make the turn?

Phew! They had me wondering for a minute. 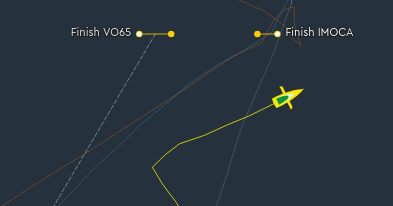 Bureau Vallee finish fourth in the IMOCA class. CORUM should finish by around 19:00, hopefully. 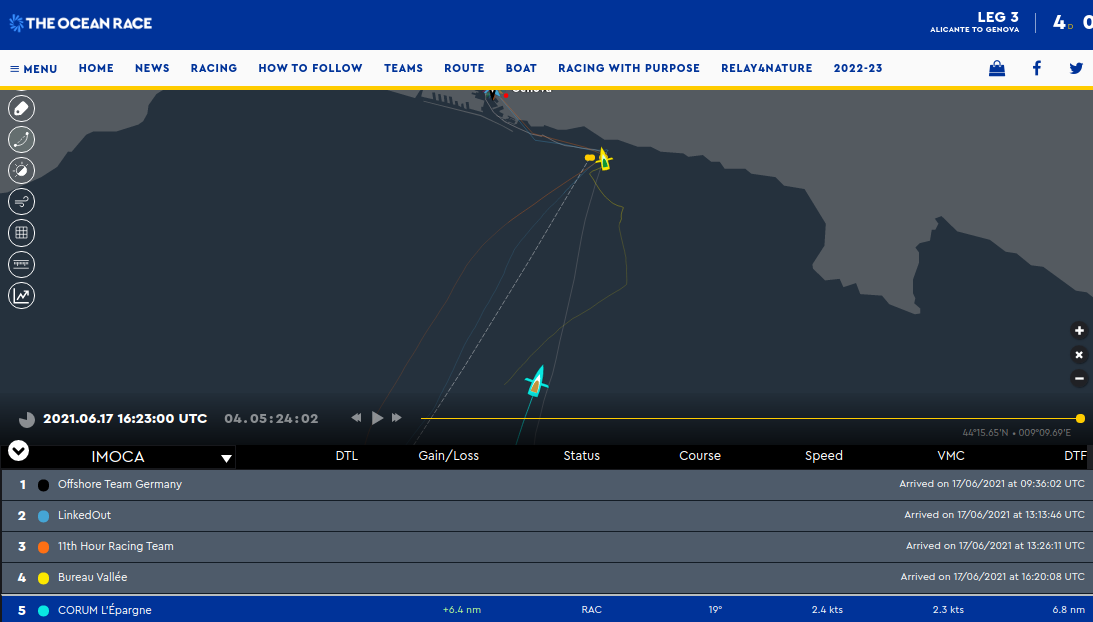 CORUM had yet to cross the line but has an official arrival time, as it was decided to shorten the course for them as they were last and time was dragging on I expect. 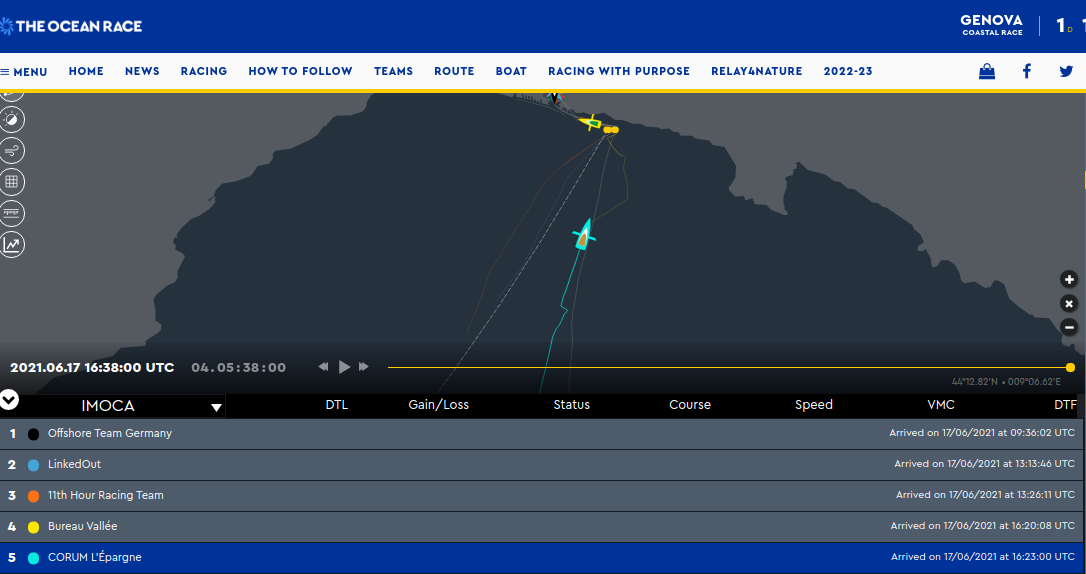 Reminder of the VO65 class finishes:

At some point this evening or tomorrow we should have an official article and video to link to. If anyone want's to watch live replays of each leg, they are here: The Ocean Race 2022-23

The Genova Coastal Race is scheduled for Saturday 19th June, with time to be decided and I expect dependant upon there being some wind.

The leaderboard is so tight in both the IMOCA and VO65 division that Saturday’s coastal race is likely to provide the winning margin in The Ocean Race Europe
June 18, 202112:50 UTC
After three weeks of intense offshore and inshore action that has seen The Ocean Race Europe’s 12-boat fleet race over 2,000 nautical miles (nm) / 3,700 kilometres (km) from France to Italy with stops in Portugal and Spain, the event’s inaugural edition will come to a climax tomorrow with a final coastal day race in Genova, Italy.

All-important bonus points are on offer for the top three finishers in the IMOCA and VO65 class (three points for first, two for second, and one for third) and with the podium positions on the overall race leaderboard so tight, Saturday’s coastal race looks set to decide the final rankings in both classes.

The article then goes over the race to date and the scoreboard.

Nothing from Seawolves since the interview with Charlie Enright...

Genova isn't the best place for decent winds it seems. The course was almost flat calm this morning. Currently there is 5 kts which is just below the threshold required. Race management have called a postponement to the start but there is a cutoff point of 13:00 BST. If the race does not start by then, the current scores will hold meaning that Offshore Team Germany and Mirpuri Foundation Racing Team will win their respective classes. The boats are out and ready. We are just waiting for conditions to improve.

The video can be watched from the beginning, while you are waiting for it to go live again.

Thought it was starting again but it was YouTube autoplay.
Last edited: 19 Jun 2021

The best place for latest updates is on the Live Update page (or Twitter) rather than waiting for the video stream to go live again. That has caught me out already today. Genova Coastal Race Day - Live updates

1310 CEST - The wind is starting to settle in the 4 knot range from 130-140 degrees. The Race Committee is looking for the World Sailing standard to start a race - 5 knots for 5 minutes. Not there yet.

1225 CEST - Still quite calm over the race area - about 2 to 3 knots of wind from 140 degrees. And so we remain under postponement.

1345 CEST - The VO65 fleet has started and is racing. An exciting start with three boats over early and two more needing to tack around after being shut out. But the Mirpuri Foundation Racing Team is clean and in the lead. 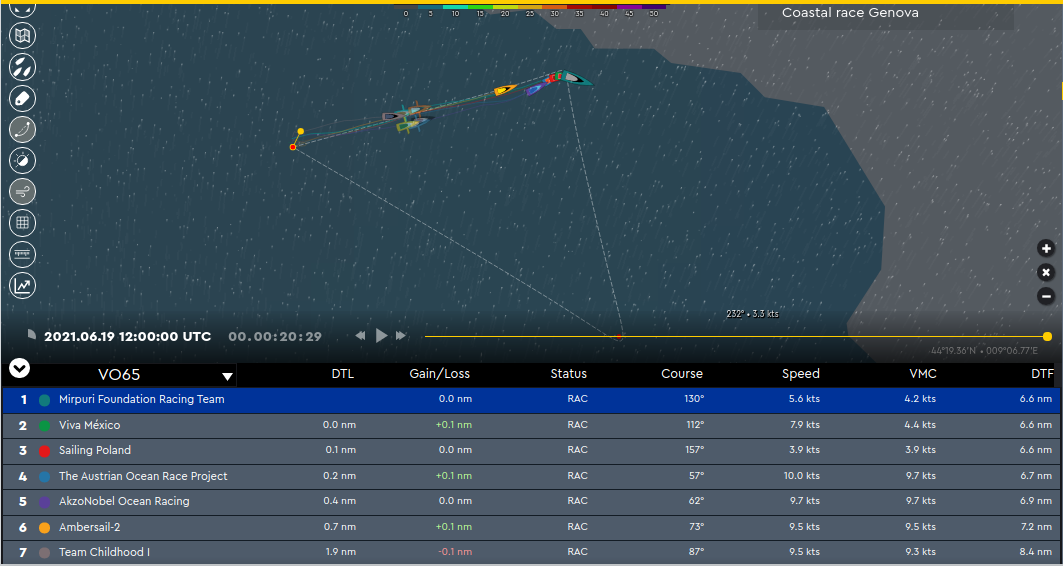 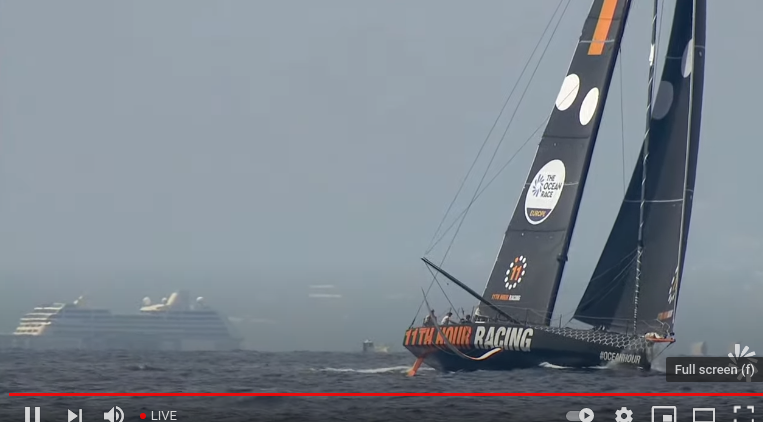 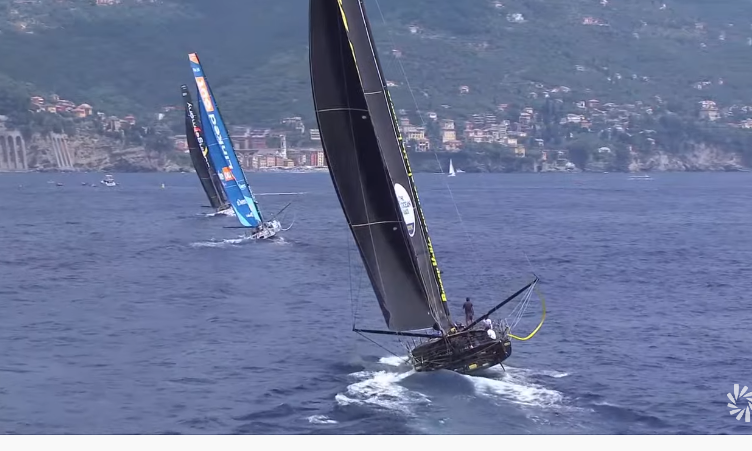 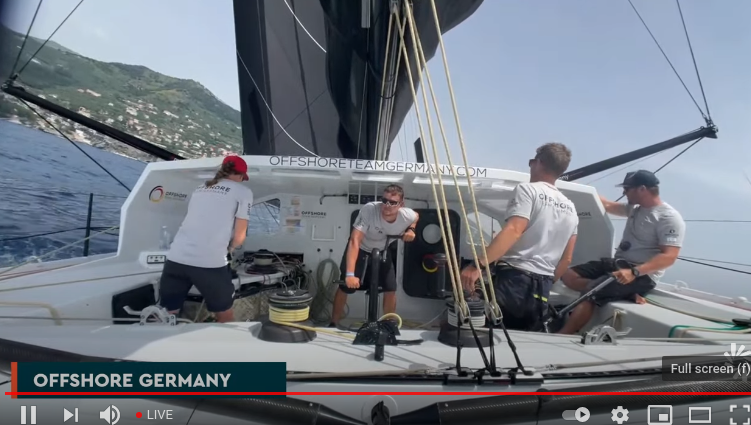 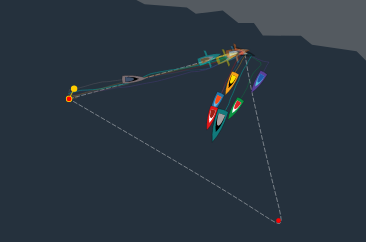 Mirpuri are leading the VO65s 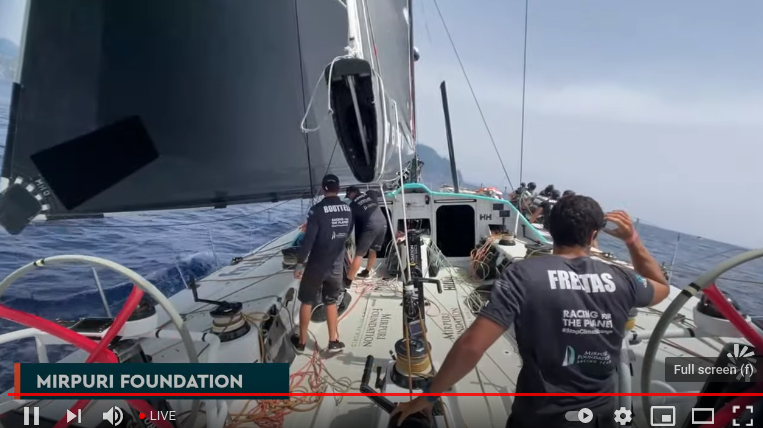 Apparently teams have not had a lot of experience with A4s in this race. The sail may have become detached from the bowsprit before they began to deploy it. This could have cost them but for the lead they had which afforded them some recovery time. 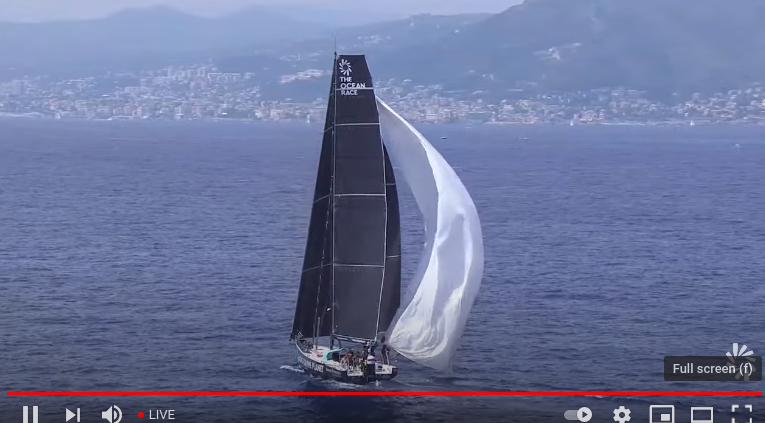 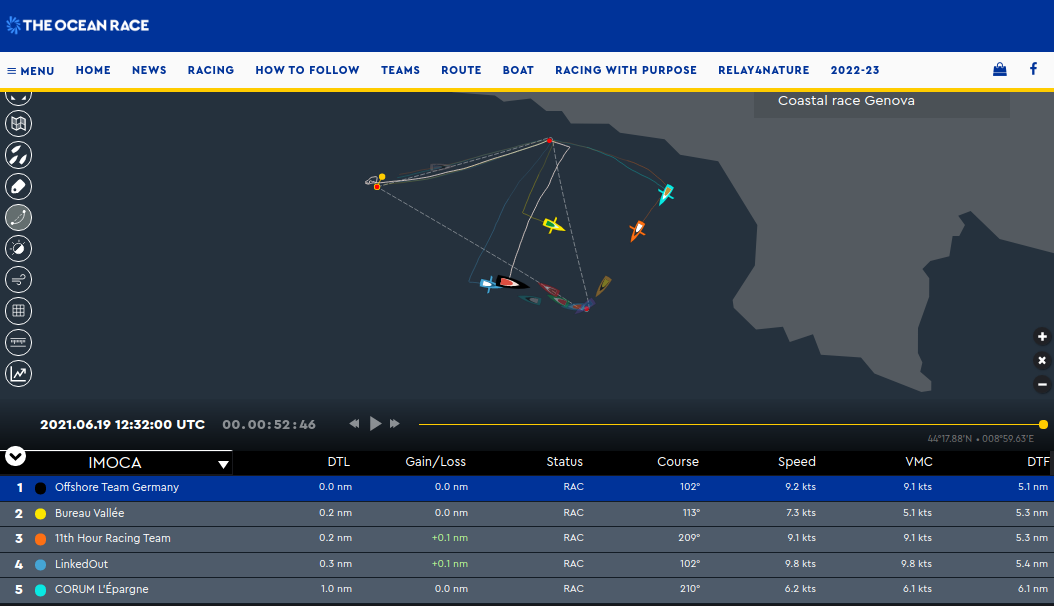 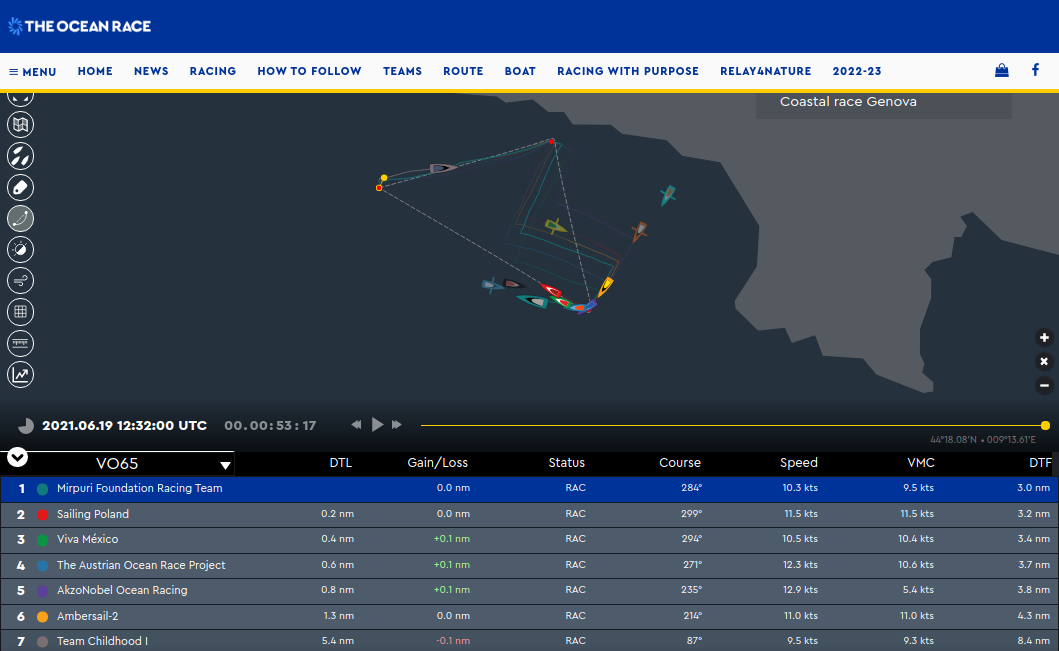 Considering the winds there is some great action. Enjoying this. 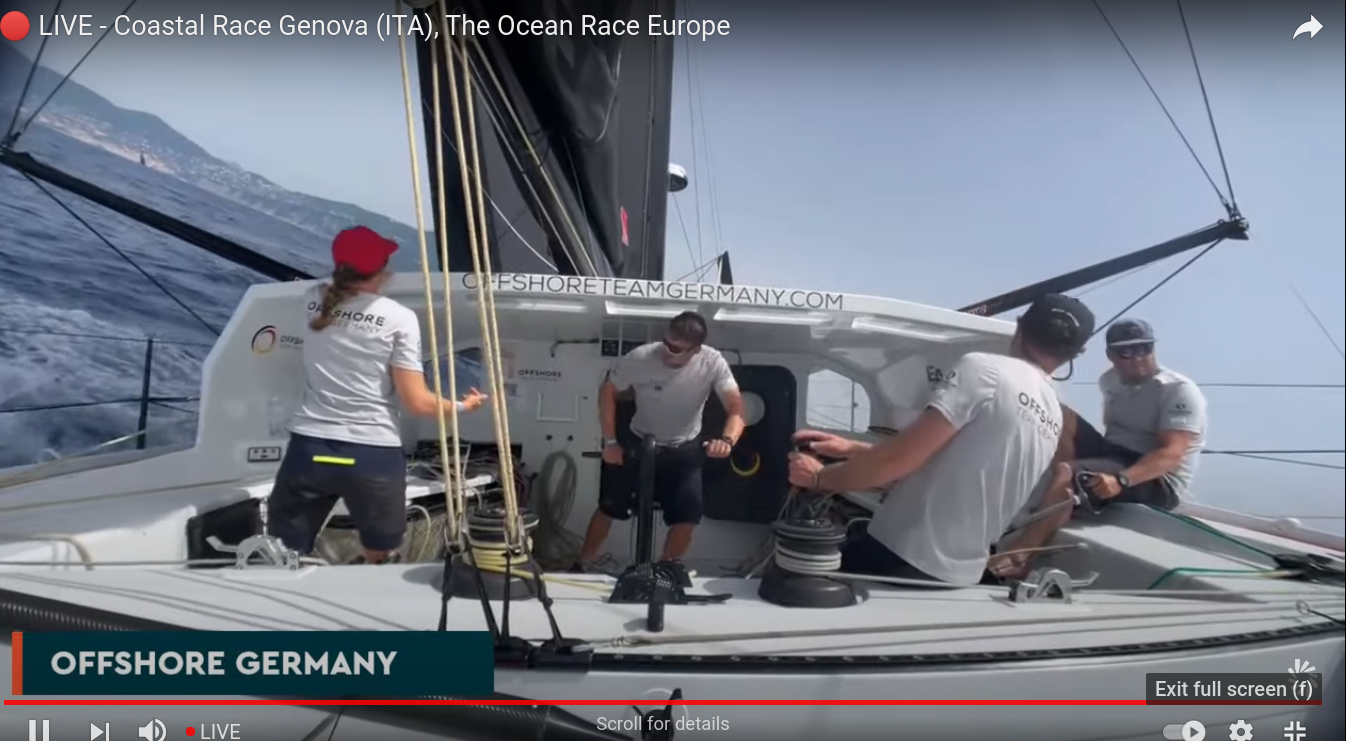 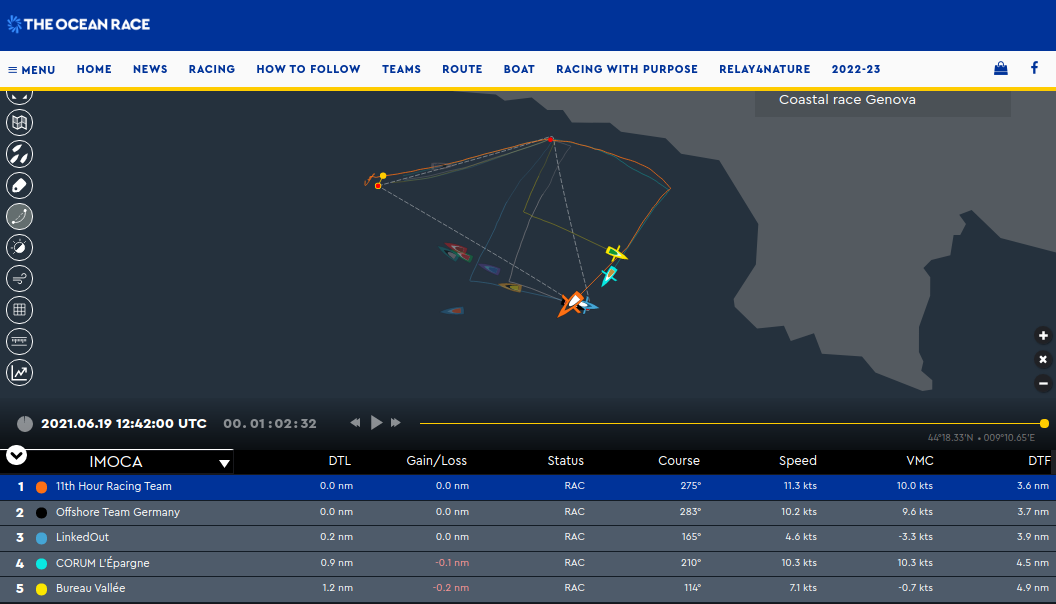 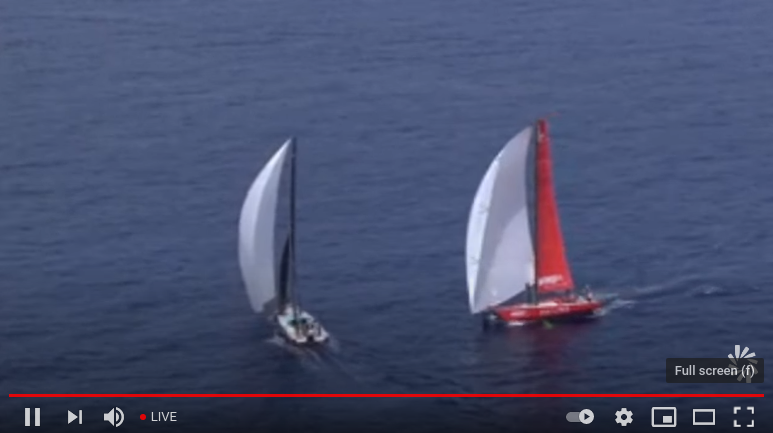 The tracker seemed a bit confused so ignoring that for now. Provisional VO65 results:

Projected IMOCA points if places are maintained to the finish: 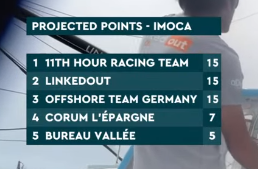 LinkedOut try to block the air for Offshore Team Germany 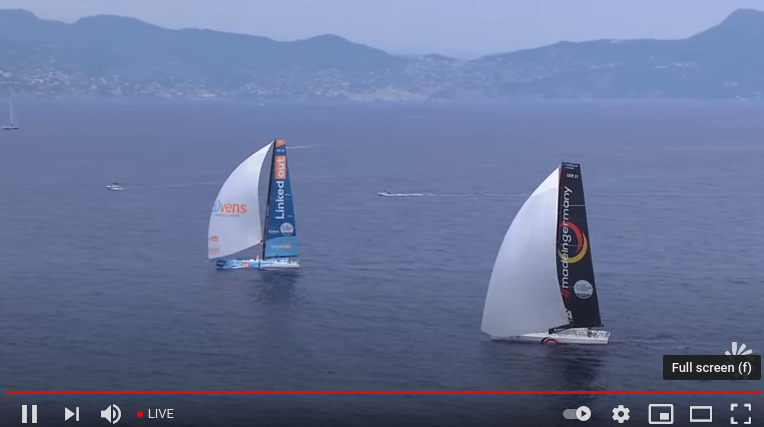 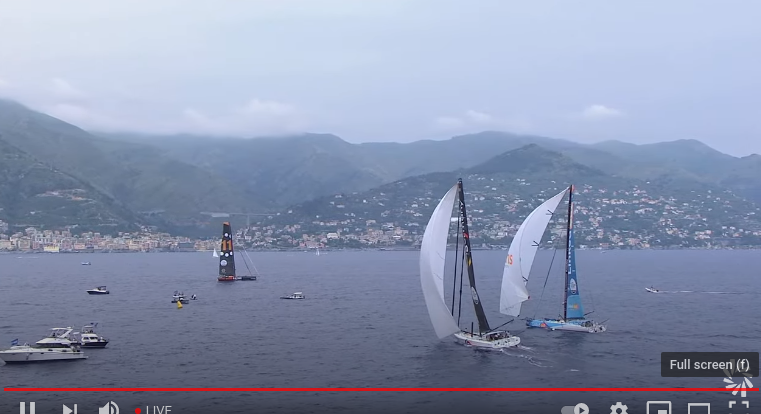 This is how close they are. Note the state of OTGs sail due to LinkedOut but it's too late, OTG have the speed and go over the line first. 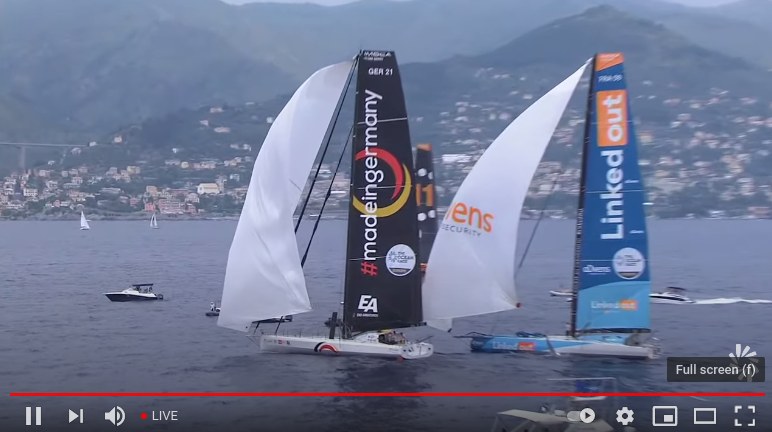 1510 CEST - 11th Hour Racing Team wins the Coastal Race. but Offshore Team Germany just pip the finish ahead of LinkedOut to secure the overall win in The Ocean Race Europe for the IMOCAs

1455 CEST - The Mirpuri Foundation Racing Team has won The Ocean Race Europe in the VO65 class!!

That was an interesting two class race to follow and I'm glad the organisers were able to proceed with it despite, and within the constraints of, a pandemic. For me at least this was more than just another race. The VO65 (Formerly Volvo 65) was designed to be fully crewed. The IMOCA 60 was designed for solo around the world sailing. This competition gave some interesting insights of those differences and also some surprises, where theoretical advantages were not always realised in practice.

Teams and class organisations have a great deal of data to take away from this event which will feed in to design considerations and strategies. It may even be pivotal.

Here is the official article for the race finish. There may be more to follow but if not that pretty much wraps things up for this thread.

The Coastal Race in Genova provides a fantastic finish to The Ocean Race Europe
June 19, 202115:14 UTC

Class leaders Offshore Team Germany (GER) and Mirpuri Foundation Racing Team (POR) have been confirmed as the respective IMOCA and VO65 winners in the inaugural edition of The Ocean Race Europe, after an exciting final day of coastal racing in Genova, Italy today.

The atmosphere on the pontoons was ripe with anticipation and nervous energy this morning as the 12 competing crews from around the world departed the dock for the final time on the new three week-long multi-stage professional yacht racing event.

The points spread was close at the top of the seven-boat VO65 and five-boat IMOCA 60 fleets, and with bonus points up for grabs for the top three finishers in each class in the planned 90-minute sprint race around the Gulf of Genova, the final standings remained open.

Windless conditions at the scheduled start time of 1200 CEST / 1000 UTC forced the race committee to postpone until a new breeze arrived and racing finally got underway at around 1340 local time. Racing took place in 7 to 10 knots of southeasterly sea breeze.

The VO65 start was a congested all-action affair, with two boats – Sailing Team Poland (POL) and The Austrian Ocean Race Project (AUT) – having to tack around after being forced outside the committee boat end of the start line, and three others – AkzoNobel Ocean Racing (NED), Ambersail-2 (LTU), and Team Childhood I (NED) – having to restart after being called over early by the race committee

But staying clear of the melee going on all around them was the overall VO65 class leaders Mirpuri Ocean Racing Team – led by Yoann Richomme – who sailed off the line unfettered and into a clear lead.

Despite some nervous moments on the final run to the finish where they made an uncharacteristic sail handing error while hoisting the A4 spinnaker and came under attack from Bouwe Bekking’s Sailing Poland, ultimately the Portuguese team held on to their early advantage to take the coastal race win and seal overall victory in The Ocean Race Europe.

Meanwhile the battle for the overall top spot in the IMOCA class was decided in a near photo finish for second place in the coastal race between Robert Stanjek’s Offshore Team Germany and Thomas Ruyant’s LinkedOut.

Offshore Team Germany had led around the first two legs of the triangle-shaped race course, but dropped to second early on the final downwind leg behind the American-entry 11th Hour Racing Team after a poorly executed tack rounding the second mark of the course.

Approaching the finish the German boat was under threat from the rapidly advancing LinkedOut – a team they would have to beat to avoid being relegated to third overall. The spectators on the water and watching on the worldwide live video feed held their breath as the two yachts were overlapped at the finish line but with Offshore Team Germany just holding on to win the race and the overall series by the smallest of margins.

“I’m super-happy. I’ve prepared this team for four or five years and I’m so happy we managed to do so well,” Stanjek said dockside after racing.

“My idea to build a successful team for The Ocean Race was to combine Olympic sailors with offshore experienced sailors and this is what we executed and it proved to be successful. We’re getting stronger every day, there are no egos on board, everyone is listening and it’s a good learning atmosphere. I’m very proud of the team.

“We learned heaps about the boat, about the profile of the race, how to manage the watch system on board, communications; it’s much more than just getting the win, we are taking a lot of lessons home with us.”

Today’s win for the 11th Hour Racing Team moved them up to second place overall in the IMOCA class, one point ahead of the French crew on LinkedOut who dropped to third overall.

“We showed a lot of fight today and that shows a lot about this group,” said skipper Charlie Enright. “I’m proud of what we did.”

For the Portuguese Mirpuri Foundation Racing Team, the VO65 class victory is the result of a composed and consistent performance that saw the team collect maximum points on offshore legs two and three, and in their homeport inshore race in Cascais.

Richomme’s crew had put in several weeks of Atlantic training prior to The Ocean Race Europe start from Lorient, France on Saturday May 29, and as the only team in the VO65 fleet to invest in a new sail wardrobe they began the race as favourites – a mantle they comfortably lived up to.

“Job done. Mission accomplished,” said Richomme from on board immediately after the finish. “I think we like to make things hard for ourselves. We lost the kite on the first hoist, and I thought we were going to end up getting passed by two boats. But we managed to get it back up in the air again.

“From the start we were leading – it was a tough one because all the boats around us were over the line, so it was quite tense.

“We could not have finished on a better note – winning this last coastal race here in Genoa. It was the best way for us to make sure we would win the event overall, so we are thrilled.

“It’s been a big effort to get to here… The hard work and the training and everything we did in Cascais for months paid off. The whole crew has been fantastic. There’s a lot of talent in that crew and I think we managed to use it as best as we could.

Following racing there will be an official prize-giving ceremony this evening at the event village in Genova where the winning teams in the IMOCA and VO65 class will be presented with a trophy to celebrate their achievements in the inaugural edition of The Ocean Race Europe.