Most of us know that 1066 saw William the Conqueror of Normandy defeat the Anglo-Saxon King Harold at the Battle of Hastings – we hear about housecarls, knights, feigned retreats, arrows-in-eyes and lots of other exciting, warlike things. Harald Hardrada is part of that story, invading northern England, with Harold's brother, Tostig, and forcing Harold to march north and fight him at the Battle of Stamford Bridge, then turn back south to fight William. That's the British view of Harald Hardrada – landed in the north, was killed at Stamford Bridge and perhaps cost Harold is life and his crown. It turns out that there is a bit more to him than this rather simple story. 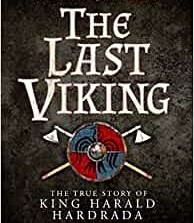 Hardrada's life story is fascinating and the author has done well to bring together detail from a wide range of sources which often differ in the detail and have contrary views of events. Hardrada starts as the half-brother of Olaf and sees him dying in an attempt to regain the Norwegian throne. As a teenager, Harald is exiled – first to Rus (in modern-day Ukraine) and then to Constantinople, joining the Byzantine Emperor's Varangian Guard – where he served for fifteen years. As a Varangian, Harald fought at sea and on land, against a range of enemies, and also served as a senior bodyguard to the Emperor. He became part of the Byzantine political scene whilst as a bodyguard, was probably a lover of a number of senior women at court (including the Empress Zoe) and took full part in deposing at least one Emperor – you needed to think fast at the Byzantine Court if you wanted to stay alive. Ultimately, he returned to Scandinavia and reclaimed the Norwegian throne for himself. When the exiled Tostig came to him, proposing that Harald invade England and claim the throne once held by Canute, he accepted and this led him to his death close to York, fighting hard to the end.

This book is exhaustively researched and sometimes exhaustive to read – there is a lot of detail and there are moments, especially during the description of Byzantine politics, when you need to pay attention. This left me a little bit frustrated at times as the story's flow was disrupted. Also, Holloway occasionally strays a bit too far into what might have happened – especially with glances between lovers or conversations between characters – its not particularly necessary.

To those with an interest in the period, this book is well worth the read. If it's Vikings, the Byzantine Empire, the era itself, tactics and weaponry across the time etc, this is well worth adding to the bookshelf. If you want to know more about Hardrada himself, this is probably the best biography out there. A word of caution, it's not a book to dip into or flick through – this is one for those who want to sit with a brew and take their time.