The guilt that weighs heavy on your mind - Captured!

Tommy_Sun said:
Confession time, or 'How I was outed as a Walt'.

I need to come clean. I know that many of you here on this site take great exception to someone passing themselves off as a member of the armed forces. It is with that in mind, that I throw myself upon your mercy, and greater magnanimity.

It all started innocently enough. I had no idea what I was about to do when I first joined up. For I did serve, in actual fact, as a boy scout. No, bare with me here.

At that time the Scouts still wore the green beret, it was what attracted me to them actually, being too young to join the forces proper. I would have lied about my age, but being 13 years old was pushing it a bit. I decided if I couldn't be a little fish in a big pond, I would be a big fish in a little pond. It was thus that I set about making my mark...

It was a rainy day in August - I remember it well. We had been out camping in the woods for several days, and our time was nearly at an end. No matter, I decided to show some initiative and took some of the younger boys, deeper 'in country' for a little impromptu training. Long story short, by the end of it, the little buggers were knee deep in mud and crying like little girl scouts - a few cuts and bruises, but nothing that required immediate medical attention. I decided to push them that little bit further. It's how men are made. And little did they know I had them lined up for a bit of IRT later on. Interrogation Resistance Techniques for those that don't know about these things.

They weren't bad lads, but I felt that they really weren't giving it a 110 percent, as any true wearer of the green beret should. If it was up to me, these things (the beret) would not have been handed out willy nilly to any tom dick or harry that just decided to go on a jolly in the woods for a weekend. They should only have been distributed to those that passed selection. Well, this was me evening the score for that little oversight.

"On your knees you ******* Abortiaaan!" I screamed at them at the top of my nearly developed lungs. My voice, still cracking in late puberty, providing a rather nifty little cadence just at the end, which was a nice touch, I thought. I had been watching the Wild Geese a little more than was probably healthy for me, admitted.

I wanted to find their essence. And if yomping them half way 'round the country in gopping feet would help achieve that, then that would be absolutely hoofing. Gen dit, I really wanted to make this run ashore count.

Little known to me, it was nearly 'home time', and a search party had been sent out for the missing boys, myself included. It's a common source of 'snafus' - when you are in the jungle, you lose all sense of space and time, living by your wits, you have to experience it to really understand it. Those that know...

I had no idea we were effectively surrounded. Dusk was setting in. Unbeknownst to me, the mothers of two of my new 'recruits' were standing not less than 10 yards away and heard it all. They were not best pleased. You know the type. Real pushy sorts. But not pushy enough in my book. Spare the rod...

We were 'stormed'. That is the only way I can describe it. Women screaming at the top of their lungs "We've found them, we've found them, it's alright, they are still alive!" - which I thought was a bit of an over reaction really, but they did say we had been gone for over 8 hours (see Jungle Time Dilation).

The young boys were picked up from the mud, and quickly administered first aid to their wounds. 'Twas nothing but a scratch. Poofs. Elastoplasts at the ready, they got patched up in quick fashion and were getting ready to be shipped out of our secret location. The foliage was too dense for a chopper landing, so everyone just walked instead.

And that was that.

I was taken back to the regimental HQ for a quick debrief, or so I was told. It seemed more like an interview without coffee to me.

The Scout Leader was apoplectic with rage. His face bursting blood vessels, and dribble sliding from the side of his mouth.

"Just what the bloody hell do you think you were doing?". (Grammar wasn't his strong point)
"Do you realise you could be prosecuted for kidnap and mistreatment of minors?".
"What the hell is your mum going to say when I tell her?".

None of these words had any effect on me. I'd been brushing up on my Interrogation Resistance Techniques. If this was the worst they could throw at me... Water off a duck's back. I held my mettle.

Seeing I was made of the 'right stuff' and not likely to crack any time soon, he tried a different ploy. Instead of appealing to my higher motives and reasoning, he got personal:

"And just what the hell are those 3 stripes sewn on to your shirt? As far as I am aware, there is no actual rank of Regimental Sergeant Major in the Scouts."

He got me with that one. I didn't think he'd notice.

"And what's more, the last time I looked, the well known motto of the Boy Scouts was not 'By Sea By Land'".

He'd got me again. Game over. Busted. This could only go one way now.

I tried to ponder where I had gone wrong. I'd found a genuine cap badge from the RMC in a local classified's and I wore it with pride.

Really, the Fleur-de-lis isn't a million miles away from the RMC badge. It's also worn over the left eye, 2 fingers above, when good drills are observed. I mean, it's not like I rocked up in a great big bloody white Pith helmet like Michael Caine. I did try to be subtle at least.

I'll give you an example:

Here's Richard Jackson wearing a Scout beret - one of the last Scouts to wear a beret at 1st Adderbury. A uniform review in 1989 resulted in the beret being dropped from the Scout uniform at the start of 1990. 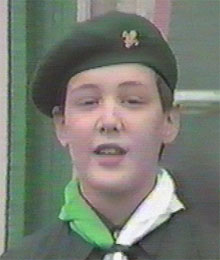 For a little more information about what the culture was like at the time:

These bizarre pictures come from a game where the Scouts had to find a nurse, vicar and miner!

Tell it to the judge! 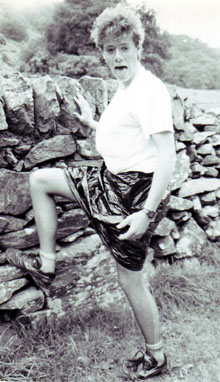 
Anyway, it turns out that it wasn't my RMC badge that he was most upset about. He had many more words to say about the 3 stripes I had sewn on to my shirt, only days earlier. Apparently, there was no such insignia in the Scouts at the time.

And there's me thinking I was being clever by not wearing the great big bleeding red sash over my shoulder. I did consider it though. I even thought what I would say should I be 'outed'. It was along the lines of the fact, that a specially spranged sash could be used in the field, if we ever got a kind of 'officer down' situation, as a makeshift stretcher. In fact, just as the very shirts of the Scouts were manufactured at the time, with heavier stitching than needed, for the exact same purpose.

It's a shame I got caught when I did, coz those young boys didn't know it then, but they were about to put this theory to the test. You do what you can. And then you get arrested.

As for the Scout Master. He wasn't finished disciplining me yet.

I was de-bereted on the spot, unceremoniously de-badged, and even had my woggle ripped from my throat. The most humiliating experience of my life so far. My (still perfect) neckerchief was thrown on the floor and stamped on. I would have been de-frocked as well if they had caught me earlier, but I don't want to talk about that now. Phew. Sometimes the Gods do smile on us.

Somehow though, avoiding a lengthy prison sentence did not fill me with joviality. I was more worried about having to go back to wearing that 'crap hat'. A fate worse than death.

The Green Beret was decommissioned by the Scouts in 1990, and no more that served would be able to wear it thereafter. A sad day for all concerned. I'd really hate to think I had a hand in that decision that the 'top brass' made. It's something that you'll never really know, and for the rest of your life, it will hang heavy over your head.

Anyway, I accepted my CO's decision, as only someone in a regimented organisation can (i.e. he has no choice). I don't know what their problem was really. I ask you, only a few decades earlier they were wearing bleeding Swastikas!


I didn't mention this at the time because I did not want to add insubordination to my already long list of charges. I wasn't sure if I was going to be sent to the brig, or just back home without any tea. But I certainly did not want to push my luck any further. The jig was up. Time to crack on.

I'd had a good run. I'd nearly got away with it as well. I was hanging out at the end, but I wasn't threaders about it at all.
Click to expand...

I slipped a Cub Leader a length one night, in the toilets of the White Lion. Must have been winter because it was snowing and the men's urinals had no roof. It was dead romantic, her covered in snow and semen. I managed to stay in the doorway so I missed the snow.

bumhole said:
I slipped a Cub Leader a length one night, in the toilets of the White Lion. Must have been winter because it was snowing and the men's urinals had no roof. It was dead romantic, her covered in snow and semen. I managed to stay in the doorway so I missed the snow.

Did you 'neck-er' afterwards @bumhole?
NULL

Tommy_Sun said:
Met your sort before. Dealed with them. They never complain twice.
Click to expand...


Tommy_Sun said:
This thread is not going in the direction I was hoping for.
Click to expand...

I found your assignation bumhole intrigueing to say the least in the toilets of the White Lion. However you exaggerate your own prowess in that it appears you were not alone. In fact, we are given to understand there was a troupe of matelots to assist with you, when you state she was covered in such worthies.
NULL

Bravo_Bravo said:
And off duty...

I beg to differ

Confession time, or 'How I was outed as a Walt'.

I'd had a good run. I'd nearly got away with it as well. I was hanging out at the end, but I wasn't threaders about it at all.

What screws us up most in life is the image we have in our head about how it's supposed to be.

A Southern Biff's Return to Modelling
5 6 7

How was YOUR Previous Christmas and NEW Year experience ?