The Forty Sieges of Constantinople: the Great City’s Enemies & Its Survival. by John D Grainger


Byzantium-Constantinople-Istanbul stands at the junction of two continents and the passage of important waterways, on the famous Golden Horn. As the capital of Empires before modern Turkey, its role in history has been surpassed by few cities. The dome of Haghia Sophia surrounded by its four minarets marks a famous skyline. Most readers will know of the deeds and misdeeds of the Crusaders and the fall of the city to the Ottoman Turks in 1453, but many events here recounted by John Grainger will be new to them, as they were to me. 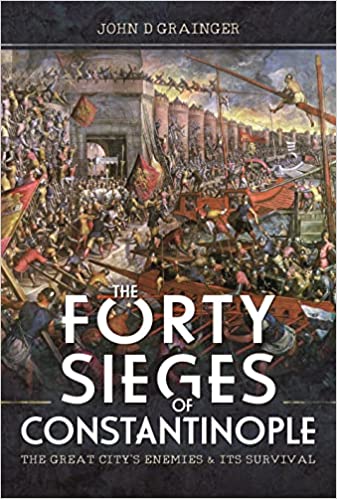 The author’s previous publications for Pen & Sword show an impressive sweep of classical history and underline his knowledge. An introduction, ‘The City’ describes its geographical position, strengths and weaknesses and ancient world defences. The single map showing the four historical cities is useful, but others could have illustrated the strategic setting. The chronological length of this work takes Grainger beyond his usual field and into the twentieth century, but seemingly without loss of confidence. Dates in chapter subtitles identify the sieges, six of them successful including the most famous in 1453, but also that of Septimius Severus in 194-6. This ‘brutal’ emperor both destroyed and rebuilt the city. Grainger writes of the array of greedy enemies and the varied points of the compass from which assaults came. ‘What other city [he writes] was so desired by so many that it had to stand guard constantly, and fought so often to survive?’ Some readers will turn first to the events of 1453, with the background and events of the siege well described. Others might read Chapter 24 on the Gallipoli campaign (and subsequent events including Chanak), wondering whether this was really a siege.

Constantine’s capture of the city in the fourth century, his rebuilding and conversion to Christianity were major landmarks. Grainger is not an admirer of the first Christian emperor. I turned for comparison to Steven Runciman who describes him as more prudent and practical than his predecessor Diocletian, with three great achievements: stability of the currency, founding a new imperial city and altering Roman spiritual life by giving official recognition to the Christian church. Grainger’s story supports Runciman’s claim that this third step was wise. Christianity was well organised and had a wider appeal than its rivals such as Mithraism.

Four ‘interludes’, really intervening chapters, introduce material which does not easily fit into the narrative (but might have done), such as the historian Polybios’s account of the city. Grainger’s knowledge of the ancient world is such that it would have been helpful to have been told more about his sources. He identifies difficulties with these in the early centuries, but what motivates his hostility to Constantine and to Christian accounts? The coloured illustrations are good, but their provenance is not identified. The painting of Mehmet II is by Gentili Bellini, famous Venetian artist; how did he come to paint the Ottoman Emperor? This is explained on the National Gallery’s website, but Grainger might have the knowledge of Venetian-Ottoman relations to add more to the story. Two captions have been wrongly transposed.

The author’s wealth of material is admirable, but sometimes difficult to absorb. The writing is serviceable, but scarcely draws in the reader.

Amazon product
And this you can see is the bolt. The purpose of this
Is to open the breech, as you see. We can slide it
Rapidly backwards and forwards: we call this
Easing the spring. And rapidly backwards and forwards
The early bees are assaulting and fumbling the flowers:
They call it easing the Spring.
They call it easing the Spring: it is perfectly easy
If you have any strength in your thumb: like the bolt,
And the breech, and the cocking-piece, and the point of balance,
Which in our case we have not got; and the almond-blossom
Silent in all of the gardens and the bees going backwards and forwards,
For today we have naming of parts.

Prince Eugene of Savoy: A Genius for War Against Louis XIV and the Ottoman Empire - James Falkner