211 years ago today saw the Battle of Albuhera being fought - the bloodiest battle of the Peninsula War.


The battle of Albuhera took place on 16th May 1811 between the allies of Britain, Portugal and Spain against the armies of Napoleon Bonaparte of France. In May 1811 Badajoz, a fortress town was held by the French but under siege by the British. In an effort to relieve the siege the French despatched a large force from Cadiz under Marshal Soult.


On hearing of the French plans, Wellington ordered General Beresford to break off his siege to meet with the advancing French Army marching from the south. Beresford’s army consisted of an allied force of British, Portuguese and the two battalions of the Kings German Legion.


On the afternoon of the 15th May, Beresford positioned his army along a ridge overlooking a small village called La Albuera about 12 miles south of Badajoz.


At around 22:00 Gen. Blake arrived with a large Spanish Army of around 15,000 troops and they took up positions on the Allies right flank.


Gen. Cole with the British 4th Division took up a position in reserve astride the road leading north back to Badajoz. All the British battalions were under strength, the King’s German Legion were well led and disciplined, the Portuguese had British officers but the Spanish were untried in battle and of dubious quality.


Soult was in command of 24,000 experienced French troops, including a cavalry brigade of Polish Lancers and French Hussars and more than 60 artillery pieces. Although his army was smaller than the allies Soult hoped that the quality of his troops were more than a match for the Allies.


Just after breakfast, Soult launched an attack against the King’s German Legion in Albuhera village with seven battalions under Gen. Godinet. Beresford ordered Colbourne’s 1st Brigade to leave their breakfast and go forward into the village to support the Germans.


At the same time Colbournes Brigade were ordered to double back up and along the ridge to strengthen the Allies right flank.


A tremendous hail storm fell on the battlefield rendering many muskets unusable. Through the blinding sheets of rain and hail, Colbourne’s Brigade still moving in column to strengthen the right flank could see large dark shapes looming straight for them, and they felt the ground shaking beneath their feet.


Suddenly there was a cry of ’CAVALRY!’


A strong force of about 800 French Hussars and the merciless Polish Vistula Lancers appeared out of the rain and attacked the 1/3rd of Foot (The Buffs) - the leading battalion who were still in column - the worst formation for infantry to fight cavalry. The Buffs Colours attracted the most attention. Ensign Thomas, a lad of just sixteen with the Regimental Colour was heard to say - “Only with my life!” - the French took his life and the Colour with it.


Ensign Walsh was wounded and in danger of losing the King’s Colour when Lieutenant Matthew Latham rushed over to take it from him. Latham defended the Colour furiously - a sabre blow took away half his face and another severed his left arm. Under the horde of jostling hooves, Latham was left for dead.


With the Buffs almost decimated, the remaining battalions of Colbourne’s Brigade - still in column - prepared to receive the full force of the cavalry attack. The 2/48th (Northamptonshire) and the 2/66th (Berkshire), second and third in the column were also overrun and both regiments lost both Colours. Only the last battalion in the column - the 2/31st (Huntingdonshire) managed to save themselves from annihilation by quickly forming a rallying square.


The 2nd Brigade under Gen. Houghton was sent to the aid of the Spanish who were now crumbling. Hoghton had the good sense to turn his three battalions into line from column to advance in a better formation for dealing with cavalry.


The Brigade contained the 1/48th (Northamptonshire); 1/29th (Dorsetshire) and in the centre the 1/57th (West Middlesex). As the Brigade advanced, the survivors of the 2/31st joined the line on the right and they continued through the ragged Spanish firing line to engage the French.


The arrival of the third brigade of the 2nd Division under Abercrombie on the left eased the situation slightly but it was still only about 3200 bayonets against 8500.


The French artillery was enfilading the British using the Colours as aiming points knowing that is where the battalion commanders would be.


An early casualty was Gen. Hoghton and Col. William Inglis of the 1/57th as the next most senior officer stepped up. As he was already in the centre of the line with his battalion he chose not to move.


The 1/57th, one of the junior battalions of the Division, held the centre of the line traditionally the most hazardous place on the battlefield. Col. Inglis was severely wounded, with grapeshot piercing his neck and lung, yet he refused to be removed to the rear and remained with the Colours.


For three hours, perhaps more, the agony lasted, yet not a man moved except to close the ever-shortening British line. Through all the crash and clatter, the moans, curses and screams, a voice could be heard calmly repeating. “Diehard 57th, Diehard.” The voice was Col. Inglis.


By doing as they were bidden the 57th earned themselves undying glory and an immortal nickname - the ‘Die-Hards’.


With the arrival of an independent French Division under Gen. Werle and sensing that the battle could still be lost, General Cole with the 4th Division in reserve, used his own initiative and ordered the Fusilier Brigade to advance and support the right flank of the 2nd Division, which was in danger of being turned by the French.


Linking up with the survivors of the 2nd Division, the Fusiliers poured volley after volley into the flanks of the French. By now the French could stand no more - they turned and broke leaving the bodies of the dead and the wounded piled high in heaps. The famous historian William Napier, in his history of the Peninsula War later wrote, “the mighty mass gave way and like a loosened cliff went headlong down the steep.”


Sensing victory in the air, the remnants of the 1/57th joined in the final charge with the Fusiliers. There was a cry from Beresford “Stop! Stop the 57th! It would be a sin to let them go on!” But it is unlikely that this order was received by the Regiment.


Following the battle, the Regimental Colour of the Buffs, that cost Ensign Thomas his life was later recovered by a sergeant in the 1/7th Foot (Royal Fusiliers). The King’s Colour of the Buffs was also found - ripped from its staff, covered in blood and mud, stuffed inside the tunic of an officer barely alive and slashed beyond recognition. This officer turned out to be Lieutenant Latham. He later received medical treatment at the personal expense of the Prince of Wales. He continued in the service, heavily disfigured, one armed and blind in one eye.


The battle of Albuhera had began at 8.00am and six hours later it had ended. 4,159 British casualties had been sustained. The French losses were never made official for fear of Napoleons wrath, but is likely they exceeded 10,000.


Spanish and Portuguese losses were about 2,000.


The 1/57th of Foot (later the Middlesex Regiment) who faced the onslaught longest without flinching lost 428 out of 627. Not a man was found missing and all wounds were to the front.


For several hours after the battle neither side knew who had won or lost. When Wellington received the first despatches and learned of the British losses he ordered “This will never do - write me down a victory”


The French commander Marshal Soult later angrily recorded “There is no beating these troops. They were completely beaten, the day was mine, and they did not know it and would not run.”


Wellington later dryly observed - “Another such battle would ruin us.”


Of the 14 infantry regiments present at battle, the 57th of Foot (West Middlesex) were granted the unique honour of carrying the battle honour ‘Albuhera’ on their cap badge as well as their Colours in recognition of their steadfastness and bravery.


On 9th September 1992 when the Queen’s Regiment was itself absorbed into the Princess of Wales’s Royal Regiment, (PWRR), Albuhera was adopted as the new regiments’ main battle honour. and the 16th May the main regimental day.


Following the battle of Albuhera, survivors of the 1/57th gathered in a Spanish tavern and vowed never to forget their comrades sacrifice. From this meeting grew the ‘Diehard Ceremony’ in which a loving cup was passed in silence following the toast “To the immortal memory” by the Officers and Sergeants Messes of the Middlesex Regiment. This tradition was later inherited by the Queens Regiment and subsequently by the Princess of Wales’s Royal Regiment. It is traditionally drunk at 20:00 hours on the 16th May.
"I'm not a Bastard - I'm the Bastard - and it's Mr. Bastard to you"

"Steady the Drums and Fifes" 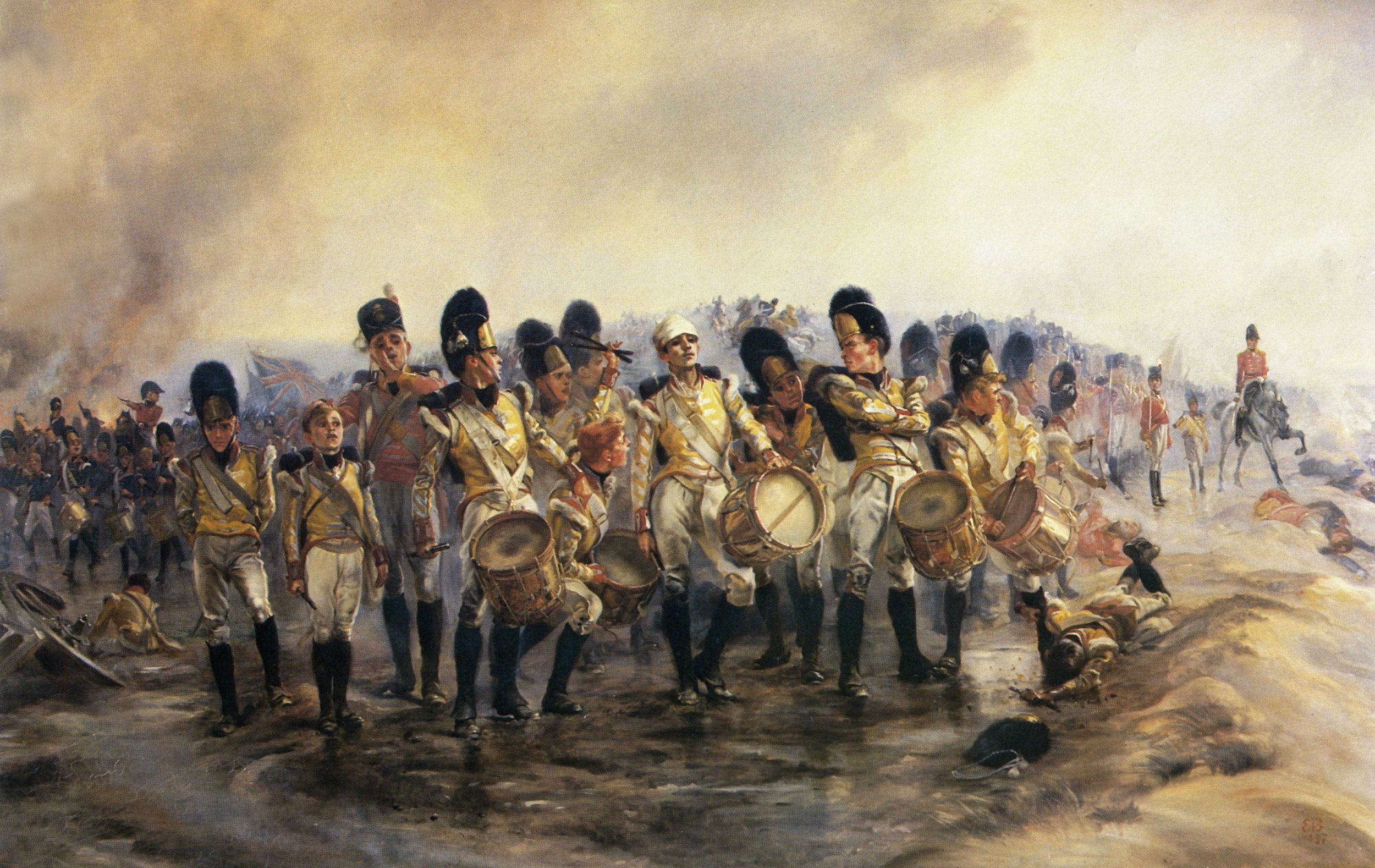 I posted this in one of the Market Garden threads. One of the most famous Die Hards will finally be laid to rest today, 16th May 2022, 37 years after his death as his ashes were mislaid.

Apologies but is is behind the Telegraph paywall.

Belated memorial for veteran of two world wars, who featured in the Battle of Normandy and Operation Market Garden, after ashes were mislaid


Horrocks's ashes will be buried at St Paul's Church in Mill Hill, north London, close to fellow Die Hards and a set of regimental colours.

Ex Observer said:
I posted this in one of the Market Garden threads. One of the most famous Die Hards will finally be laid to rest today, 16th May 2022, 37 years after his death as his ashes were mislaid.

Apologies but is is behind the Telegraph paywall.

Belated memorial for veteran of two world wars, who featured in the Battle of Normandy and Operation Market Garden, after ashes were mislaid


Horrocks's ashes will be buried at St Paul's Church in Mill Hill, north London, close to fellow Die Hards and a set of regimental colours.
Click to expand...

I will be there later today to pay my respects.
"I'm not a Bastard - I'm the Bastard - and it's Mr. Bastard to you"

Albuhera was one of a, sadly limited, number of occasions when Spanish infantry fighting alongside British and Portuguese acquitted themselves well. Zayas's division fought and died like the rest of Beresford's line.
I have a theory that, while the battles the British fight may differ in the widest possible way, they have invariably two common characteristics - they are fought uphill and always at the junction of two or more map sheets.


Every man thinks meanly of himself for not having been a soldier...

Battle of Maiwand - online event May 2022