The mere words 'Anglo-Saxon' tend to set Woke teeth on edge, as does every objective treatment of our history. As a result, the Wokesters will hate this book. That is one excellent reason to buy and read it, although there are plenty of others.

Notwithstanding Woke disinformation, the Anglo-Saxons are the ancestors of the vast majority of people living in England and of many in the rest of the UK and Ireland, to say nothing of the former British Empire, so we ought to be interested in, and even celebrate, them.

The author, Marc Morris, has studied and taught at the universities of London and Oxford and is a Fellow of the Royal Historical Society specialising in the Middle Ages, so he is well-qualified. He writes well, in a racy and engaging style; this is history as enjoyable literature. Here, for example, is an episode in the life of St Wilfrid, who was shipwrecked on the Sussex coast:

“Wilfrid and his companions were soon surrounded by a mob of pagan locals who showed no deference to his episcopal dignity but plenty of interest in his rich possessions. Happily, Wilfrid had God on his side (and a cohort of well-armed warriors whom he had prudently brought with him), so they escaped from the skirmish with only five dead and eventually found their way back to Northumbria.” 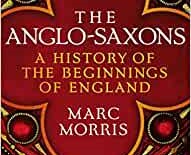 The history of the Anglo-Saxons comes between the fall of the Roman Empire and the Norman Conquest; roughly 410 – 1066 AD. This period, the early Middle Ages, used to be called the Dark Ages because fewer written records survived from it than from either Roman Britain or Norman England. Now however other sources of information, including archaeology and science, have allowed us to fill in the gaps in the jigsaw; the resulting picture is fascinating.

The Anglo-Saxons got off to a bad start, which coloured later historians' view of them. It is not in doubt that they arrived in Britain as pagan, barbarian invaders. In Alex Burghart's words: 'The departure if Rome's legions precipitated a catastrophe for which there is [so far] no parallel in British history. Late Roman Britain had towns built of stone, Christianity, writing, currency, hot water and central heating. Within a few generations, a ragtag of barbarous kingdoms occupied lowland Britain: the towns were empty, the gods were many, literacy had departed, there was no coinage and everyone was speaking Saxon and taking cold showers.”

The Romano-Britons had become too civilized; they had lost the capability to wage war, were unable to defend themselves and repel the invaders. They were massacred, enslaved or driven into the inhospitable West. The result is that today only the Bretons, Cornish, Welsh and some inhabitants of the former kingdom of Strathclyde can truly call themselves British. Unlike other parts of Europe, where the Franks settled in Gaul, which became France; the Ostrogoths in Italy and the Visigoths in Spain, the Germanic conquerors of Britannia did not immediately become Romanised, civilized or evolve a Romance language based on Latin. Pagan Saxondom was imposed over most of the island. Christianity clung on in places like Skellig Michael and Iona, by the skin of its teeth. Four hundred years of civilization had gone down the u-bend of history.

What is remarkable is that the Anglo-Saxons did not remain barbarous, despite frequent wars with each other and with Denmark – which occupied a large slice of eastern England for many years – and other kingdoms. They became Christian and thus open to civilizing Christian influence from Europe. By 1066 they had evolved a centralised nation-state with a single royal family, a regulated currency and a national Church, which fused elements of Celtic and Roman Catholic Christianity. There was a form of constitutional government with a 'parliament' known as the Witangemot. They had a literature, of which the epic poems Beowulf and The Battle of Maldon are the best-known examples. Little of their architecture survives, because it was mainly in wood, but the remaining stone buildings, such as the church of All Saints, Brixworth; the crypt of Hexham Abbey (a legacy of St Wilfrid); St Cedd's church at Bradwell-on-Sea in Essex, which is still in use for worship, have an austere beauty. Small items, like the stunningly beautiful Lindisfarne Gospels and the ornaments found in royal and episcopal burials (The Sutton Hoo belt buckle, the Kingston Down brooch, St Cuthbert's pectoral cross...) demonstrate the Anglo-Saxons' delight in rich and intricate ornament. They had come a long way, although the return of central heating had to wait until the twentieth century. Little did the Anglo-Saxon nobles who crowded about the deathbed of Edward the Confessor in January 1066 know what fate had in store for them later that year, but that is another story.

I have no complaints about this book except its price: 25 Pounds in bookshops, although copies may be sourced for less on amazon.co.uk and elsewhere. It is as fat and as heavy as a Bible, but unputdownable.

Helm said:
Picked it up on Kindle it's excellent AY
Click to expand...

I ain't read it Helm. The review is by @metellus cimber II , all credit for the review goes to him.
Labour: For the Few, NOT the Many!
Tory: Vote for us we can ignore you better than Labour do.
I
I'm a Gammon and proud of it!

I'll be getting hold of it on kindle for summer reading. But a question for @metellus cimber II.
From the review the author seems disposed to look down on pagans and considers christianity a requisite for civilisation. (I might argue the opposite.)

Dwarf said:
I'll be getting hold of it on kindle for summer reading. But a question for @metellus cimber II.
From the review the author seems disposed to look down on pagans and considers christianity a requisite for civilisation. (I might argue the opposite.)

I may be answering for him, but not the impression I got on reading it no. It's an excellent read, haven't finished it yet, but Christianity is more depicted as one of the unifying threads of the period but not in a superior way.
NULL

Helm said:
I may be answering for him, but not the impression I got on reading it no. It's an excellent read, haven't finished it yet, but Christianity is more depicted as one of the unifying threads of the period but not in a superior way.
Click to expand...

The Authors 'Norman Conquest' is superb and fully reccomended by myself, I cannot wait to read this one
'There is much to learn from the British: their reticence about disclosing details, their clear expertise in human intelligence, their non-hysterical reaction to very real threats. Many Americans may have an inferiority complex about things British -- the refinement, the style and, of course, those accents' -

Dwarf said:
I'll be getting hold of it on kindle for summer reading. But a question for @metellus cimber II.
From the review the author seems disposed to look down on pagans and considers christianity a requisite for civilisation. (I might argue the opposite.)

The point was that it was through missionaries from Rome that European/Roman civilisation began to filter back into England. Thanks to the monks and bishops, the more that the Anglo-Saxons had to do with civilised Europeans (like the Franks, who had become Romanised), the more they wanted to be like them. So it was not just religion that they received; it was literacy and civilisation, too. Interestingly, there were also links between the Anglo-Saxons and the Byzantine Empire. The Byzantine objects found in the Sutton Hoo hoard leave no doubt as to this. The English coronation ritual is a copy of the Byzantine imperial ritual. I have been told by Orthodox monks that the English church was considered to be Orthodox until William the Conqueror forcibly brought it into line with Rome.