retread2 said:
Better his poetry than his cooking, especially his apple crumble.
Click to expand...

Grumblegrunt said:
there was a bloke in 1GH who bought his own 8mm SMG and used to play with
Click to expand...

I am reliably informed that it is still available in the Czech Republic, but not elsewhere as the posession is frowned upon, to say the least.

Rubbish, the round on the right is far too small.
W

Make it a milky one.
D

Buttmaster General said:
That would be the Guards doing their drills - I'll get my coat.
Click to expand...

You can watch them on TikTok.

My coat's next to yours.

The Wombat was only a ranging gun for the SLR.
C

Grumblegrunt said:
why did we not keep the small metal gun considering most were never fired and just needed ammo that was better than indian supplied wadcutter.

the aussie approach in vietnam was an intersting one. SLR, M203, lanchester, M60.

The SASR used all the above and much more. They used the L2A1(AR). They modified these with shorter barrels and some with the M203 grenade launcher. The cut down AR was said to sound like a .50cal.

Australia also produced a 2.25 inch shorter SLR, the L1A1-F1. It had the shortest stock option and shorter flash suppressor. The barrel was full length. It was intended as a jungle rifle and supplied to Papua New Guinea, also the Royal Hong Kong Police. It was also issued to female occifer cadets at RMC Duntroon.
Last edited: 19 Jun 2020

Cromarty said:
Australia also produced a 2.25 inch shorter SLR, the L1A1-F1. It had the shortest stock option and shorter flash suppressor. The barrel was full length. It was intended as a jungle rifle and supplied to Papua New Guinea, also the Royal Hong Kong Police. It was also issued to female occifer cadets at RMC Duntroon.
Click to expand...

Now this is short: 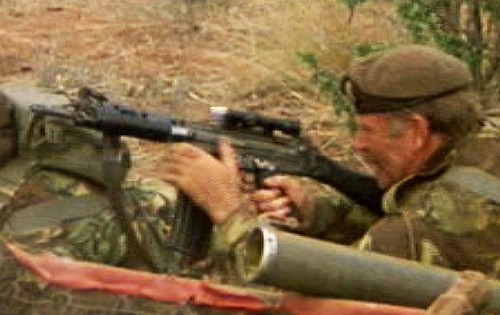 Her Majesty's Press Corps.... only the innocent (and members of the House of Lords) have nothing to fear.
C

I'm not sure what to say. I don't know if the person responsible should be promoted or shot! Is that a scope on that, that umm, that pistol?

Cromarty said:
I'm not sure what to say. I don't know if the person responsible should be promoted or shot! Is that a scope on that, that umm, that pistol?
Click to expand...

Singlepoint sight by the look of it..
Normality is a paved road: It’s comfortable to walk, but no flowers grow on it.
M

bigeye said:
Now this is short:

Cromarty said:
I'm not sure what to say. I don't know if the person responsible should be promoted or shot! Is that a scope on that, that umm, that pistol?
Click to expand...

Nimbus said:
Singlepoint sight by the look of it..
Click to expand...

It is a 'single point' although it's off-set to allow the use of iron sights too. The bloke wielding it is Ian Yule (ex-PARA and SAS). He was a weapons adviser on the film The Wild Geese from where this shot is taken. So presumably he borrowed a 40 round 7.62x51mm mag, a hacksaw and cobbled it all together
Last edited: 19 Jun 2020
Her Majesty's Press Corps.... only the innocent (and members of the House of Lords) have nothing to fear.

Mufulira said:
IIRC a shorty barrel SLR would have a substantial muzzle blast and quite ruinous on one's hearing unless "Elf and Safety" made ear plugs mandatory --- not sure about the flash eliminator being all that efficient in so short a bbl/
Click to expand...

It was a 'made up' weapon for the film 'The Wild Geese'. I assume adapted by the user Ian Yule. Presumably the film's armourers helped him adapt the thing for firing theatrical blanks.
Her Majesty's Press Corps.... only the innocent (and members of the House of Lords) have nothing to fear.
W

bigeye said:
Now this is short:


Something similar appeared in an episode of 'The Professionals'. I think the one where Dave from 'Minder' was the bent arms storeman.

mcphee1948 said:
As a civilian, I've wondered about this - when a modern soldier goes into combat, where does he/she carry the ammunition for their gun.

Modern infantry guns can fire many rounds in a short time. So they must need reloading frequently.

Where are the re-loads kept? Is it in boxes or packets, carried in a soldier's uniform pockets? And, as a follow-on question, how many boxes or packets of ammunition, does each soldier get issued with before going into action?

Apologies if these seem naive questions!
Click to expand...

In accordance with recent protests, one's slave carries anything heavy, leaving the more satisfying parts of the job to oneself. Obviously.
NULL
C

Thanks for setting that straight. For a moment there i thought God might have branched out into making pistols.

More on the mystery customized 'THAT Rifle' from the man himself: The mystery deepen however as it seems it was a real weapon.

I apologise to you and your readers for the delay on my part for responding to the many questions on the subject of the weapon I used on The Wild Geese. As you know, I only received your query about a week ago, so I hope I’ll be excused from an appointment with the firing squad!

The overall question is was that weapon experimental and the answer is yes.

Second question, where did it come from? Answer: The U.K. England.

Third question, what was it? Answer: It was an updated S.L.R. complete with an attached single point dot reflex sight and 4 X 40 round magazines, as well as a special rifle sling, flash eliminator and bayonet attachment.

The rounds were standard NATO 7.62 Long (with crimped ends – for blank firing). The barrel was engineered to fire blanks, not live ammunition. It was not a detachable choke as used by the South African Military for blank firing. The cocking hammer was slightly smaller than the standard S.L.R. was, but more refined and robust.

I had no input into the allocation of the weapon being issued to me, only that I was asked to assess the weapon’s performance from a certain source. I did of course point out that I was only firing blank ammunition and my assessment could only be based on those findings because the load in the blank ammo would not be the same as the varring loads used with live ammo which could vary in special operations.

My assessment of the weapon was as follows:

Because of the short barrel, the special sight was unnecessary because you would not engage a target in a so-called snipers capacity. On sustained automatic fire the barrel and stock became very hot. However, the rate of fire was abnormally high. The only weapon I’ve used with an equal rate of fire was a German Spandau Machine Gun – the version with the reduced rate of fire. But I was using live ammo on the German weapon.

Did I like the weapon and would I use it on an operation?

Not on the knowledge I gained firing blanks on a film. But after firing live ammo with varring types of ammo and cartridge load – maybe? The load in the cartridge may affect the barrel temperature but the altered load may compromise your intended purpose and operation. The weight of the ammunition could be a problem for a single operator. It has to be carried and would of course affect his speed and mobility in carrying out his operation. Without a full capacity assessment, I would choose the HANOK, which is tried and tested (HECKLA KOCK – HECKLER & KOCH?) sub-machine gun.

A film of the nature of the nature of The Wild Geese, given the subject matter and the political and international climate at the time, would have made it for a South African experimental weapon to appear on such a film extremely unlikely. Apart from that there was an arms embargo in place at the time.

I would like to thank all your interested readers for their enthusiasm shown towards the film (which I fully agree with) and private comments about me as an individual. I trust this will put to bed any further confusion regarding the experimental S.L.R.

Steve, should you require any further assistance, please feel free to contact me.

Her Majesty's Press Corps.... only the innocent (and members of the House of Lords) have nothing to fear.
You must log in or register to reply here.