Moderator
Kit Reviewer
As an extra on the final (and shittest) season of 24 I had the great pleasure of being on the sub that sank the Chinese carrier. In a later scene I had a brief chat with Stephen Fry (playing the UK PM), who complimented me on my turnout (I was then playing a British officer and had elected to use my own service dress rather than the crap from the wardrobe dept). I was also a tac team driver; whizzing around the streets near the studio in the middle of the night in big SUVs - great fun. Never met Kiefer Sutherland though.

"..there has seldom if ever been a shortage of eager young males prepared to kill and die to preserve the security, comfort and prejudices of their elders, and what you call heroism is just an expression of this simple fact; there is never a scarcity of idiots."

Oh, and I've driven Captain Peter Norton around in my car .
Beat that you f**kers!

Oooh!
All the Aussie talk reminded me.
Cactus Lounge in Slingapour Airport UK bound Oct 2003.
Dying for a large diet Coke & Ice...except the ferkers would not accept a Scots tenner the barstewards and I'd dumped all my Aussie cash at Tullamarine.
Dire straights...could not buy F all...I had no credit card. Never have had one. Nor did I have time to go hunting a changer.
Anyway....gruff voice from behind...next guy in the Q.
He got my Coke & a bottle of water ( as you still could then) to take away.
Pierce Brosnan!
( He muttered....."w.....s eh"?)
​
A

He was a small part of the Profumo scandal, Mandy rice Davis was his mistress, she and Christine Keeler were the two tarts that almost brought down the government back in the 60's.

I'm taking the photo. She had a very very nice bottom then 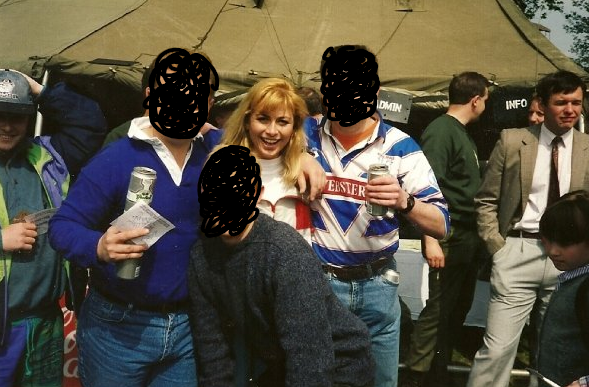 Book Reviewer
Not me, but a Royal Marine was walking down Oxford St, he met Tom Hanks face to face. He said Hello Mr Hanks I'm in the Marines! Tom brought himself to attention and shouted loudly. "Get Down and give me 25 NOW!!!
There was Jones 09 who always felt the strong need to bang away at Jerrie's line, Evans 15, white faced and nervous but squared up, and did his duty, and my batman Williams 51, the most perfect gentleman that I have ever met. They are all gone now, my lovely boys! Pl Comd 2nd RWF Nov 1917.
C

A lady whom, I once read, would bend over backwards to please.

wasteofrations2 said:
My ex wife once saw Frank Carson at a motorway services. Apparently he was asking people if they wanted his autograph.
John Thomson, eh? Was he...niiiice?
Or just...great?

We saw Frank in a show at Blackpool South Pier early 90's. 20 minutes after it ended and we're at the Pier entrance and he comes strolling out in scruffy clothes and a duffel bag. Got stopped by everyone and their dog for a autograph. It must have signed everything and must have taken him ½hour to go 100m.


"What I lack in decorum, I make up for with an absence of tact"
- Don Williams Jr.

TheSnake said:
Oh, and I've driven Captain Peter Norton around in my car .
Beat that you f**kers!
Click to expand... 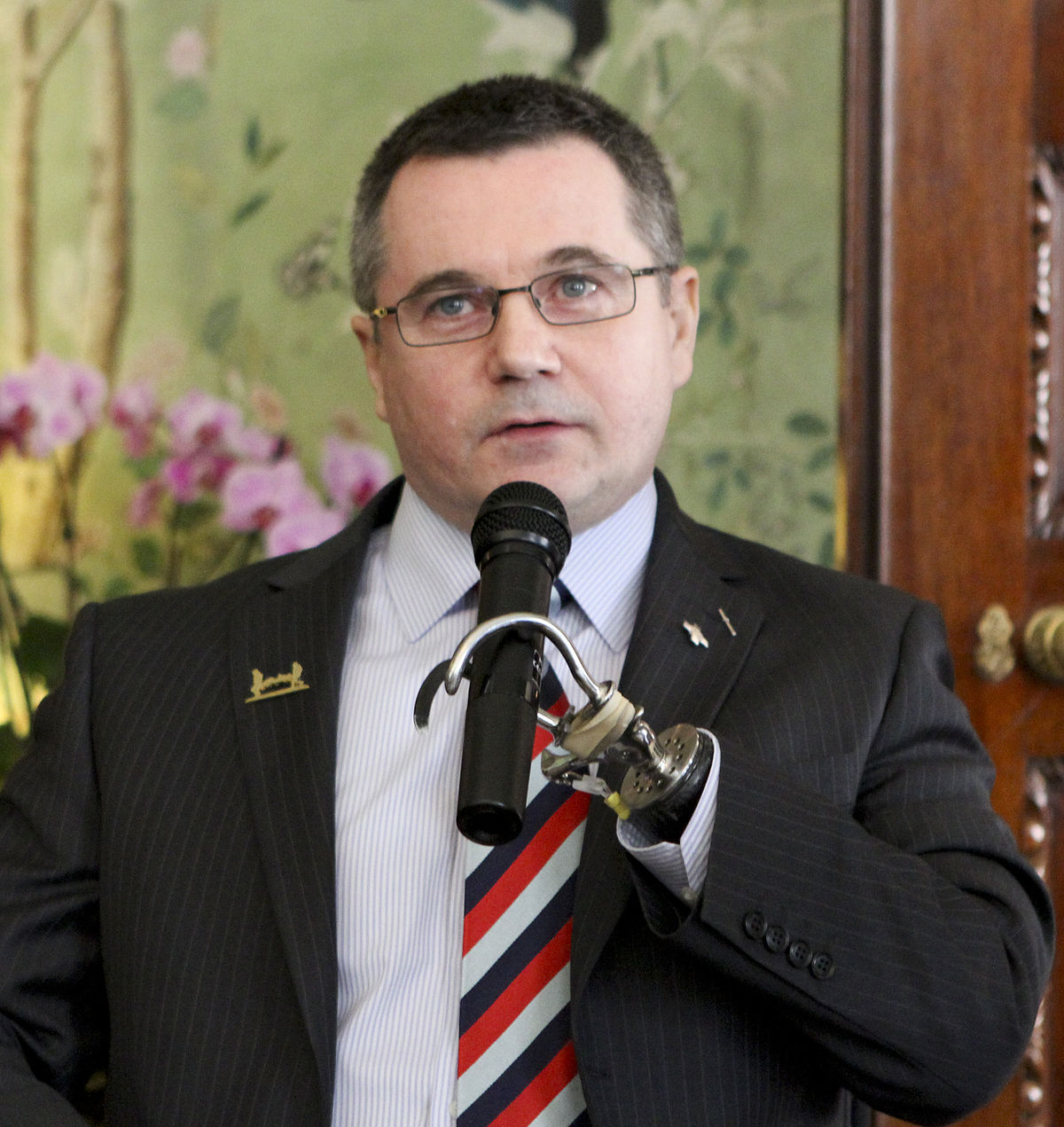 
"What I lack in decorum, I make up for with an absence of tact"
- Don Williams Jr.

TheSnake said:
Oh, and I've driven Captain Peter Norton around in my car .
Beat that you f**kers!
Click to expand...

Is that all? I've partied with him and got him wankered! 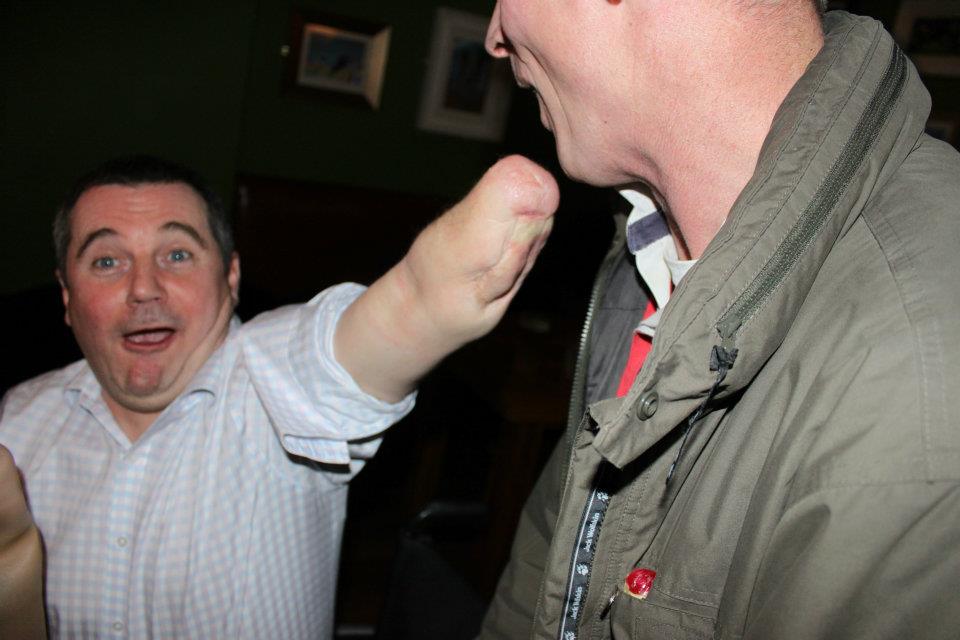 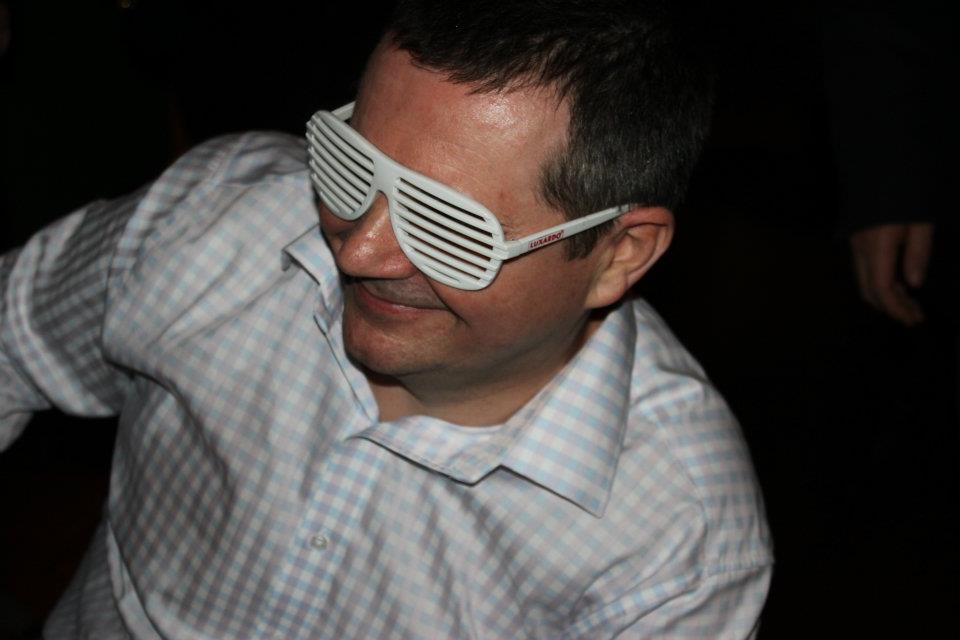 Moderator
Kit Reviewer
Book Reviewer
Roy Walker of catchphrase fame regularly used to travel on the 0630 service from Blackpool South to Preston and then onto that there London. He was a miserly, grumpy old bastard who called me a cnut for not letting him use his Senior Citizens Railcard to buy his ticket
RIP Sluggy - The Queen of Arrse, Unicorns and Fluffy things.

There is a rumour going around that I have found God. I think this is unlikely because I have enough difficulty finding my keys, and there is empirical evidence that they exist.
M

A signaller said:
He was a small part of the Profumo scandal, Mandy rice Davis was his mistress, she and Christine Keeler were the two tarts that almost brought down the government back in the 60's.
Click to expand...

Cold_Collation said:
Mick Hucknall shags to his own music.
Click to expand...

The RSPCA interviewed him about "Bunnies too tight to mention..... "
Last edited: Friday at 09:23

In the late '70's I had split up with my wife and moved in with a nice & younger bird who ran a wine bar in Blackheath and went onto the licence. Part of the application process was an interview with the Police in Lewisham.
The C/Insp. who interviewed me knew of my links with the NRP and suggested that I listen to the chat of some of the customers at the wine bar and pass the information on to him!
The wine bar whilst being in Blackheath, was surrounded by some very dodgy manors, Lewisham, Deptford, Charlton, New cross etc, and we did have some "interesting" characters drink at our establishment.
The Richardson gang were the biggest criminal outfit S. of the River when the Krays ruled North of the river and Eddie one of the brothers was a very rare visitor but there were lots of lesser criminals who were regulars.
I explained to the C/I that I was out of the police and wanted a quiet life & didn't want to finish up face down in the Thames and as long as customers paid their bills & didn't cause trouble I was happy to serve them but that he was welcome to send his CID men there.
That night the local Mr Big, one "Paddy Onions" the chap here Patrick ONione – True Crime Library
came into the bar, shook my hand and said I had "done well son" and bought a bottle of Dom Perignon to celebrate the fact I wasn't an informer and the local villains could relax in the bar with me around, obviously the C/I was one of Paddy's compliant cops.
I knew for a fact that one of our regulars who was taking out one of our waitresses was involved in the spate of armoured security van robberies. We always knew when they had a success, he and 3 or 4 more mates would turn up & treat everybody in the bar to Dom Perignon which was £70 a bottle then.
Paddy was to me a charming guy and as a result of his belief that I was ok, made sure all the local villains treated us with respect. In the few years I was there we never had any trouble and one guy who did a runner owing c£50 turned up a day later with his arm in plaster, said he was very sorry and paid the owed money plus £20 for the trouble! Apparently when my g/f had told Paddy about it, he had sent two of his men around to teach him the error of his ways.
Our local green grocer "Gary", was the local Mr "Fixit", if you needed anything and didn't ask questions you got it at a truly cheap price.
I won a car on the quiz show "Sale of the Century" a mini worth about £3k, Gary said I needed something with a bit more class & a couple of days later turns up with a 1 year old Porche 911, take this for the weekend & see if you like it & you can px it plus a grand for the mini. I took it out for a spin, ooh it was nice, fantastic acceleration & cornering. As I was on the way back I passed someone I knew from the bar, stopped & offered him a lift. He asked where did the motor come from, when I told him Gary and told him the deal, he said get out of it now, wipe all your
prints off it as it is sure to be hot. I did & called Gary who admitted it might be a bit warm but it was well "plated" & no one would notice. I went on to px it legitimately for a 3 year old 528 BMW.
Poor old Paddy was shot & killed in a gang dispute as per the article and when his shooter was arrested in Birmingham, 2 police from Lewisham to pick him up and in a struggle the shooter was put in a choke hold & died, allegedly paid for by Paddy's son.
Sadly the Girl I lived with was turning into an alcoholic, starting drinking as soon as the bar opened, carrying on until I had to put her to bed in the afternoon. I was missing my kids and so after a few rows about her heavy drinking and not really trying to stop, went back to the wife.
There are so many other tales, I did consider writing about, I even thought of the title "The village, an everyday story of townsfolk", cause Blackheath very much was like a village where most people know each others business or at least think they do!

JackSofty said:
Shocking!! I will not hear a word said against the Cheeky Girls! Take that back Sir or I will have my satisfaction...

So you think the Cheeky Girls aren't a pair if slappers? I've got the contact details of the daughter of a former Nigerian oil minister who has a few million dollars she needs to get over to the UK. If you're that gullible interested.
Now in my 60's and even grumpier than I was in my 50's. Just so long as you realise that I'm right and you're wrong, we'll get along just fine, OK?

JackSofty said:
Shocking!! I will not hear a word said against the Cheeky Girls! Take that back Sir or I will have my satisfaction...

Sent from my S41 using Tapatalk

Me and Windsor Davies were good mates in the mid/late 70s. He would stop and have a good ol' chinwag with me on Wallington high street many a time. Well... so my mum tells me 'cos I was only about 1yr old at the time. Still, a true gent and plenty of time for everyone. RIP Windsor.
Sticks and stones may break my bones but words will never hurt me... except "Ready, Aim, Fire!"

StrikerLight said:
Me and Windsor Davies were good mates in the mid/late 70s. He would stop and have a good ol' chinwag with me on Wallington high street many a time. Well... so my mum tells me 'cos I was only about 1yr old at the time. Still, a true gent and plenty of time for everyone. RIP Windsor.
Click to expand...

Especially your Mum?
​
You must log in or register to reply here.