The author, a curator of the Fleet Air Arm (FAA) museum and just as importantly a former naval aviator, has written this magnificent tome of some 440 pages which has educated the reviewer of a period in World War 2 of which he knew very little and has come out of it far wiser regarding the activities of the Royal Navy in the Mediterranean. This is a history of which little has been written.

Commander Hobbs is historian of some renown with numerous books to his credit following the history of sea warfare with regard to aircraft carrier operations and the development of naval aviation. The author takes the reader on a journey through the time in the Mediterranean from when the Italians, with a much superior naval force, declared war in 1940, through the North Africa Campaign, convoys resupplying Malta to Operation Torch, the North Africa invasion from the west and Operation Husky in Sicily and onwards to Operation Avalanche, the Salerno landings, the Operation Dragoon landings in France and ending with actions against the Greek isles. The reader discovers from the start of World War Two the FAA of the Royal Navy (RN) were woefully under resourced and unequipped to fight a war which in this situation ranged across the Mediterranean from near end to end to an air arm fully capable of holding its own against an enemy.

The development of air power at sea was not without difficulty and required great courage from the aircrew who manned the aircraft and the senior officers who saw that naval power was changing in how it was projected beyond a visual horizon. The RN and Royal Air Force (RAF) very much suffered as related in this book from 'silo thinking' and at times lacked the will to talk to each other or played turf wars.

In the first part of the book, he relates the now much celebrated torpedo attack on the Italian fleet at Taranto and the huge success that happened, which was the result of the bravery of the aircrew in open cockpit Swordfish aircraft with inadequate instrumentation and aids that later in the war would be commonplace. Rightly, Taranto is still commemorated each year by the Royal Navy in recognition of the flights crew’s immense bravery and continued night operations against the Italian navy both at sea and on land. Also, spoken of is the actions of the FAA operating ashore in North Africa, providing considerable resources in what has been an area of operations thought to be solely a preserve of the RAF. 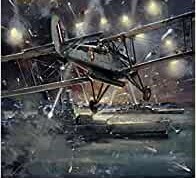 The attack on HMS Illustrious is also detailed and the very serious damage that occurred and only due to the bravery of its crew, in particular the stokers, whilst standing under a bulkhead reportedly red hot and in a fume filled engine room maintained the engines allowing the ship to move, even under air attack.

The RN carried out the first attack on a dam in 1941 some eighteen months before the celebrated 617 (Dam buster) Squadron although in this case unsuccessfully. They led the RAF as Pathfinders long before Bomber command who initially resisted such a concept across the Western desert using naval navigation skills across a featureless land.

The development of aircraft carrier and aircraft carrier groups and tactics changed the RN from every other ship supporting the big capital ships to everyone supporting the carriers. This led to the projection of air power where previously it would have been difficult or impossible, so bringing a different dimension to naval operations.

Finally, one must mention the courage of aviators from both side of the conflict who in the face of at times overwhelming odds pressed home their attacks and at time almost suicidal bravery to achieve their objectives, mostly at night with what would be termed obsolete aircraft to gain results out of all proportion to the resources available.

If you want a book regarding the Royal Navy's Mediterranean war then I can thoroughly recommend this one as it goes into great depth, about the men, their ships, their crews and the aircraft plus the remarkable the courage to operate in such a hostile environment.