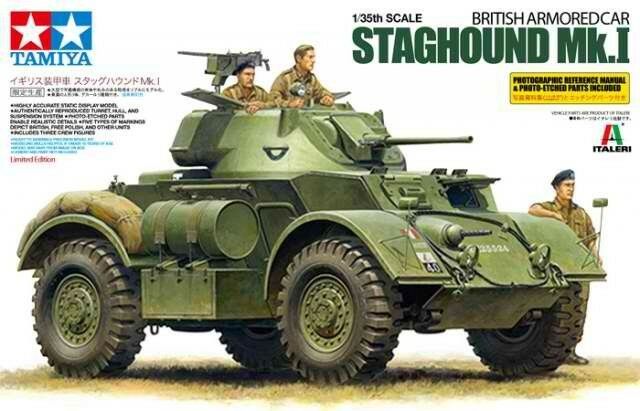 The T17E1 Armoured Car was an American armoured car design produced during the Second World War. While it never saw service with frontline US forces, it was supplied to British and other Commonwealth forces during the war, under the name Staghound. A number of other countries used the Staghound after the war; some vehicles continued to serve until the 1980s.

This is one of Tamiya's more recent releases in conjunction with Italeri. As well as 3 sprues in Olive Drab, plus the lower hull, there is a sprue containing three crew figures together with a Sten SMG and a PIAT. There is also a fret of 18 photo-etched brass detailing pieces, a length of silver-grey cord (for the towing cable) and a sheet of decals for five different vehicles; 1st Belgian Brigade 1944, Italian Cavalry 1950, 1st Australian Armd Car Sqn (Japan) 1946-48, Polish 2nd Corps 1944, British 7th Armd Div 1944. The final inclusion is a 48-page booklet or photographic reference manual. Looking through it, it is well laid out and very clearly written. It contains a brief history of the vehicle le, technical details, a walkaround and colour profiles for the five different vehicles.

I have to say, I am mightily impressed with this kit. The parts are crisp, clean mouldings with next to no flash and very few extractor pin marks. I usually buy Tamiya kits for making battle casualties as they are not usually so well detailed. This kit removes that thought and is a great improvement. I have the Bronco Models Staghound with the 12' bridges, and the Tamiya version compares very well. I often find that Bronco tend to over do it with their detailing, too many tiny PE parts!

No grumbles regarding crew figures or decals. Plenty of both with the kit and I love the way the driver figure is modelled outside the vehicle. The other crew figures are also moulded in natural positions, making this an easy choice for a stand-alone diorama. Detailing at around £32.00, you do get a fair bit for your buck! I have already ordered metal turned gun barrels for this baby.
Highly recommended, I would definitely rate this model very highly, giving it a five out of five.

But does it come with an engine?
KGB said that Boris did not lie about the the Russian NA attack in Salisbury.

offog said:
But does it come with an engine?
Click to expand...

Unfortunately, no. A missed opportunity I feel. It should have twin Chevvy engines mounted side by side!
RIP Sluggy - The Queen of Arrse, Unicorns and Fluffy things.