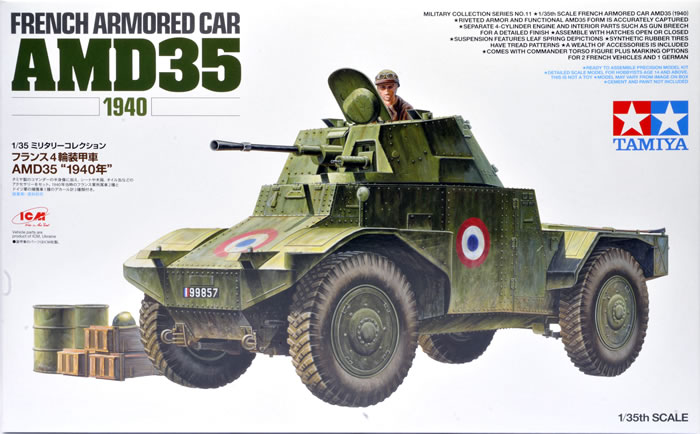 The kit is a re-issue of ICM’s AMD 35 Armored Car, in Tamiya boxing, with Tamiya decals and instructions manual and a single add-on sprue from the Japanese manufacturer.

The Kit
The kit arrives in a typical Tamiya box, although this seems to be a little too big for the contents. The box art consists of an artistic rendering of the completed model in olive drab overall, adorned with French roundels. The ICM sprues are packed all together in a single tight bag which led, in my case, to noticeable warping of the larger sprue – Sprue C. Tamiya items are packed individually and such better protected.
The instruction manual is printed in the usual Tamiya style in grayscale, on A4 format booklet. The first page depicts a black and white copy of the image from the box art, followed by a quadri-lingual (English, German, French and Japanese) short history of the vehicle. The upper side of the second page is reserved to technical advices, color chart. Because there is no sprue layout, a list of unused items is also included. At the bottom of the page is represented the first step of the building. Pages 2 thru 10 include diagrams of the assembly. Pages 11&12 contain information about the painting schemes and the application of decals.

Decals
The decals are printed in good registry, with excellent colors. The carrier film is cut very close to the printed edges, but they are a little thick and the edges visible. The transparency and adhesion are excellent.

Styrene Parts
Sprue A (ICM) x 1: All ICM parts are moulded in the brown stiff plastic characteristic to ICM products and contains the bottom plate, lateral exterior plates and other small items belonging to the body shell. Also moUlded on this sprue are the two halves of the engine.
Sprue B (ICM) x 1: interior floors, bulkheads, doors, front plate and read deck. The rear deck is molded with one hatch shut so only one half can be represented open.
Sprue C (ICM) x 1: turret halves, armament, ammunition and the whole horde of small parts to complete the engine and the interior detail.
Sprue E (ICM) x 1: the wheels.
All ICM parts are very well moulded, with excellent detail definition. A very fine parting seam can be encountered along a few parts, but very easy to clean except when on the leaf springs and smaller parts.
Sprue Y (Tamiya) x 1: the sprue shows a stamp on the back with the original year of release – 2007 so I assume it was initially conceived for another kit and adapted to the ICM kit. The sprue comprises parts for two fuel drums, three non-descript wooden cases, two rolled-up canvases, lower part of a figure with optional helmets and a pair of goggles. The parts are moulded in a dark green plastic. The detail is good and the fit is perfect. The leather jacket of the figure looks a little strange, but we'll see. The rolled-up canvases have difficult to remove seam lines at the ends and look a bit 1970ish. I ditched them and made my own.
Tyres (ICM) x 4: ICM provides hollow tires injected in vinyl for this build. The rubber is rather stiff and the weighted look cannot be achieved without some after-market purchases. The tyres have good thread pattern and reasonably accurate for what I could see in the war time photographs. There is no detail on the tire walls.

The Build
Being such a well detailed kit, I did a fair bit of research to ascertain where the vehicle has served. I had intended using this as part of a WW2 Desert diorama, but unfortunately, none of them went to the desert, many were captured and used by the Germans. Rather than use a standard Panzer Grey, I decided to paint it in French colours, so Olive Green came in. As for the interior, considering that the main objective of this build was the kit’s review in full, I painted it entirely, interior and exterior and I think it was a very good decision after all. As for open or closed hatches, I left the decision until the last phase of the build. I decided to build it hatches closed as my diorama did not involve mechanics or escaping crew. 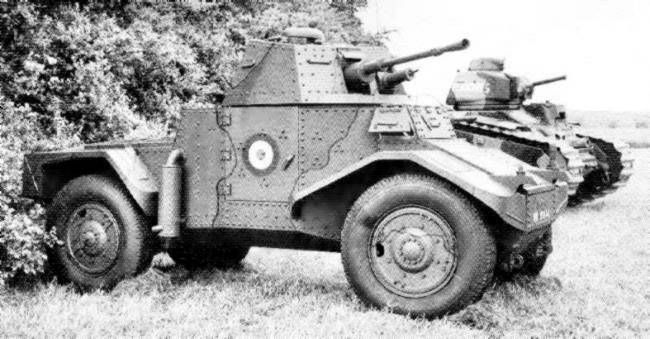 Painting and Weathering
All interior painting was done by hand use Vallejo colour acrylics with an over-wash of well watered black and, when dry; a dry-brushing of lightened gun metal on the floor and bulkheads.The exterior was first sprayed with Halford's Dark Red Primer, followed by two coats of Vallejo Olive Green.
Decals were then added and treated with Decalcote.
A well-watered Vallejo Olive Drab was used on low lights then a dry-brushing of lightened Olive Green to pick up the fine details. The wheels and underside were treated to some well rubbed-in acrylic pastels with the treads picked out in shades of grey. The whole model was then sprayed with two coats of Acrylic Matt Varnish.

Conclusion
This was an excellent subject spoiled by some rather poor quality moulding and some rubbish packaging. Considering the fact that this was a rehash of an earlier ICM model, a name I have always thought highly of, I was disappointed to say the least. On a positive note, this was an unusual subject, which, with careful modelling could become a very interesting piece for a diorama. I thought the half-figure vehicle commander was a reasonable step in the right direction. I have always been an advocate of figures with vehicles.

TOTGAF
You must log in or register to reply here.