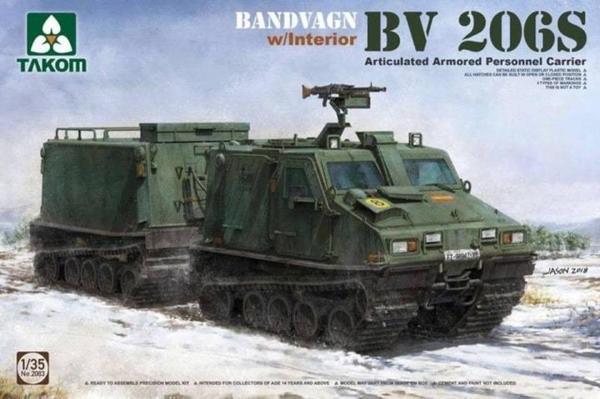 In 1974, the Swedish Defense Materiel Administration awarded Hagglund and Soner (now Hagglunds Vehicle AB) a contract for the development of a new over-snow/all-terrain vehicle to succeed the Volvo Bv 202 in the Swedish Army. Three batches of Bv 206 vehicles were delivered to the Swedish Army for trials in 1976, 1977 and 1978. Hagglunds was awarded a first production contract in June 1979 from the Swedish Defense Administration. Under this SEK800 million contract the company delivered preproduction vehicles late in 1980 and began full-scale production in early 1981. Full rate deliveries were made from the middle of 1981 until 1988. In September 1981 the Norwegian Army ordered 220 units, followed in August 1985 by a further 2,004 Bv 206 vehicles in various configurations. In September 1981, the British Army purchased four Bv 206s for trials in a variety of forms and a further number was purchased to replace Bv 202 vehicles then in service with the Army and Royal Marines. A further order (worth $40 million) for diesel-engined vehicles for the Royal Marines was placed in March 1990; these are known as the Bv 206D6. The UK MoD planned to upgrade about 200 of its Bv 206s by replacing their petrol engines with diesel units to bring them up to Bv 206D6 standard. This will extend their service life by over 10 years.

Takom are a Chinese company, now-based in the USA. Formed in 2013, they have rapidly built a name for themselves producing good quality, plastic kits. Their kits are sometimes a little unusual, sometimes a bit quirky, but they are all very well detailed and prove to be excellent value for money. This offering, which incidentally, is an early birthday present, is no exception. I have been waiting for ages for a decent quality 1/35th scale Bv206 to come on the market, so needless to say, I was a touch pleased to receive it!

The model comes in a 12" x 8" x 3" box with a good quality picture on the front, a three-quarter front view showing a vehicle in Spanish Army livery with a snow scene behind. The same picture is duplicated on the ends, while the side box-art features colour pictures of the vehicle in either Italian 9th Alpini Regiment or Spanish 66th Mountain Regiment colours.

Kit contents are as follows: 5 sprues of plastic parts (wheels duplicated on two sprues), 1 sprue of clear plastic window pieces, 1 sprue containing four rubber hoses, 2 sprues with black rubber tracks, 2 upper hulls and a sheet of decals with markings for three different units; The Italian and Spanish regiments previously mentioned plus a later version of the Spanish unit. (The only difference is the unit crest has changed!). The booklet of instructions is easy to follow with printed pictures and arrows indicating numbered parts. A nice touch is the coloured plates at the back with painting instructions

The mouldings appear very clean and crisp and there appears to be little or no mould lines left on. There are the obligatory mould pin marks on virtually every underside; this will be a problem if, like me, you want to model the vehicle with hatches and doors open! There are no obvious sink holes on any of the parts, so the filler won't be used over much.

Everything is well protected and sprues come individually wrapped in their own plastic bags. The decals are nicely printed and should, if you want, make up a vehicle from a different nationality. Considering how many countries use these vehicles, I think decals for two Spanish and one Italian unit are a bit paltry. Here was a perfect chance to add a few different countries.

Decal gripes aside, my other bug-bear comes to the fore. Why make a vehicle without including a figure or two? By adding a driver and a standing figure, one gets an idea of scale. The cramped, on board conditions are also highlighted when a driver figure is included. One thing I haven't mentioned is the interior detailing. This is ideal for making an open door model without resorting to the after-market suppliers.

That all being said, this is an excellent kit with plenty of scope for the arctic warfare modeller. There are a few challenges with the model, namely the wheel mounting systems and the coupling unit between vehicles; but these just require extra concentration and a kid-free zone! Sit down with a cup of coffee and study the parts and instructions prior to assembly.

Retailing at about £40.00, this is affordable for most Modeller's without the need for too many aftermarket part. It would certainly look good as a stand alone model, but I envisage it more as a diorama centrepiece.

An excellent kit, highly rated at 5 out of 5.