This book was first printed in 1942 and has recently been reissued by the Imperial War Museum. It received much praise when first released, essentially for the writers very clear and engaging style of writing. He later went on to become an author. He is very clearly well educated and bright with a great sense of humour, much of what he says translates very well to the modern day and all ex-forces will recognise the humour. He’s well read and appears to speak both French and German, unfortunately he appears to assume that his readers are similarly educated, although that may be because translations haven’t been provided nor references.

Rhodes was a full-time soldier for several years prior to the outbreak of the second world war and the book is about the run up to the real fighting, what is called the phoney war. These are his experiences and adventures (and they really are adventures) in France and Belgium followed by the rush to Dunkirk and the evacuation off the beaches.

Rhodes was part of the advance party of his regiment, sent to France to source accommodation. This task was eventually made easier when he was allocated a French liaison officer, he had several during his time in France and Belgium all of whom seemed to be of the minor aristocracy or very well-connected type (one was from a well-known champagne family). Requisitioning accommodation was fairly easy in the early stages as the French and Belgians were, in general, very happy to have the British back to help fight off the Boche once again. His biggest concern about the war is the thought of some sort of rerun of trench warfare from the first war and living in and surrounded by mud. He recounts many stories of his adventures in travelling the country, most of which I found amusing. Eventually he is sent up to Belgium and has fallen in with the Royal Engineers, its not made clear but I think he became an RE officer. The task there is to attempt to shore up the massive gap left where the French stopped building the Maginot line. He describes a visit he had to part of the Maginot Line and how impressive it was, how utterly confident everyone seemed that the Germans would be crazy to attack it (and as events turned out that was correct). He gives an account of how he went to a British observation post and, for the first time, seen an enemy soldier in the distance. 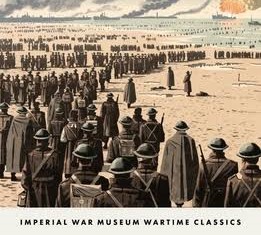 His job then was to get stores for building pillboxes to cover the Maginot Line gap. He was eventually very successful at getting the sand and all of the other materiel required. He was part of a small group of about 10 officers for much of the time and they had their own mess, wherever they could scrounge up. He writes of essentially idyllic summer days passing through some towns and country from his childhood days, until the Blitzkrieg starts. The speed of the German advance, and the rapid capitulation by governments of the low countries seems to catch everyone by surprise. The British High Command seem unable to use the phrase ‘retreat’ and have the troops pull back to regroup. Until, eventually, all of the vehicles and convoys are moving back to Northern France on the only 2 available roads as fast as possible. They eventually get routed to Dunkirk and he finds cellars for them to wait in while they are preparing for evacuation. Everything is done in an orderly British manner until the German aircraft start bombarding the town, then most of the men, realising that the ships in the harbour are being bombed, leave the cellars for the open beaches. A wise move as the German attack starts fires which allows the aircraft to continue pounding the town day and night. There are some naval personnel on the beaches who make them form lines, waiting for boats to come. The Germans spot this obvious target and come in bombing and strafing, luckily not too many men are wounded. Eventually he gets on to a small boat which takes him to a destroyer and they’re quite soon back in Blighty.

Victoria Crosses of the Zulu and Boer War. Kevin Brazier.