My wife just asked me, "When we go to Egypt, can we go on a camel?"
I said, "Behave, it would take ages to get there on a camel."
Spare a thought for mind readers

Finally, at last I've nailed it and won my first wildlife photography competition.
Well how else was I gonna keep it still long enough?
Spare a thought for mind readers

I’ve put my Rottweiler on a vegan diet. So far he’s eating one a week. Do you think I’m over feeding him?

Completely misunderstood pride month.
Does anyone want to buy 15 lions?
Spare a thought for mind readers

Book Reviewer
A man was forced to take a day off from work to appear for a minor traffic summons. He grew increasingly restless as he waited hour after endless hour for his case to be heard.
When his name was called late in the afternoon, he stood before the magistrate, only to hear that court would be adjourned for the next day and he would have to return the next day.
"What for?" he snapped at the magistrate.
The magistrate, equally irked by a tedious day and sharp query roared, "Twenty pound contempt of court. That's why!"
Then, noticing the man checking his wallet, the magistrate relented. "That's all right. You don't have to pay now."
The young man replied, "I'm just seeing if I have enough for two more words."
No sooner did we form into teams than we were re-organised.
I was to learn later in life that we tend to meet every situation by re-organising and what a wonderful method it is for giving the illusion of progress whilst only producing confusion, inefficiency & demoralisation.
PETRONIUS AD 66

Two crows were flying along slowly minding their own business enjoying the scenery, when all of a sudden out of the blue an F/A-18E/F Super Hornet goes screaming past, barely missing the now somersaulting, and wildly flapping crows.

The other crow replies: "I reckon you would be too if you had two arses and both of them were on fire!"
https://www.online-exiles.co.uk/
U 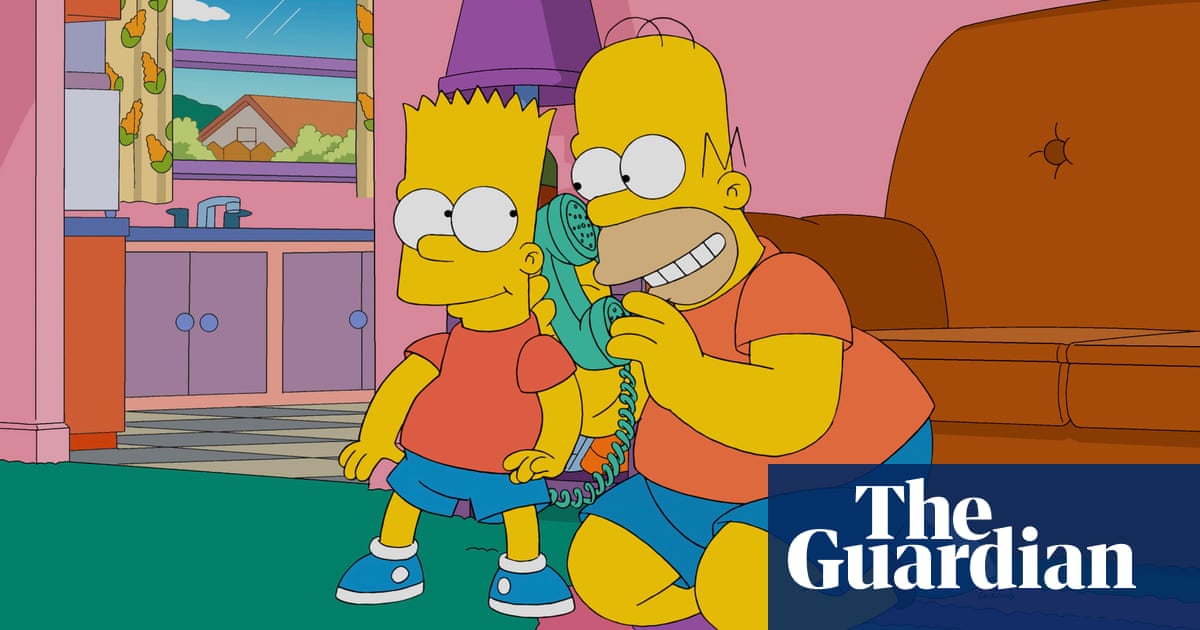 ‘Can I get Amanda Huggenkiss?’: the return of punning prank calls

Bart Simpson was a big fan, and the prank call has always been the curse of phone-in shows – as GB News discovered this week

www.theguardian.com
"It could only happen in a cartoon. Actually Nigel Farage was recently persuaded to read out a birthday message to Hugh Janus on Cameo. And now there’s GB News."
Click to expand...

I was the only person who laughed.
U

tiredoldhorse said:
Was anyone taught a musical instrument at school?
Has a knowledge of Frère Jacques assisted you at any stage?
Click to expand...

No, and yes. The tune is perfect for singing "I am bored" over and over again, best of all in a round - though I concede that this is difficult to perform solo, but it's something to which to aspire.

I was the only person who laughed.
Click to expand...

There was a girl in my class at school called Jessica Head. In the year above us her brother, Richard.

I shit you not.
I don't respect your opinion and I don't care if you're offended.
M

I'm not an alcoholic, I'm a drunk

Yesterday my Grandad went to the Cobblers to collect his shoes: The cobbler says. ''When did you bring them in mate?!! Grandad says. ''Wednesday, March the 10th 1949.''

The Cobbler says. "You're having a laugh mate, this shop has changed hands 17 times and we don't keep records. Anyway, where's your ticket?!!

Grandad opens his wallet and produces the ticket in perfect condition.
The cobbler can't believe it, but goes down the cellar stairs and searches an hour for the shoes He comes up the stairs all covered in cobwebs with a pair of shoes and says to grandad. ''Is this ''em?'' 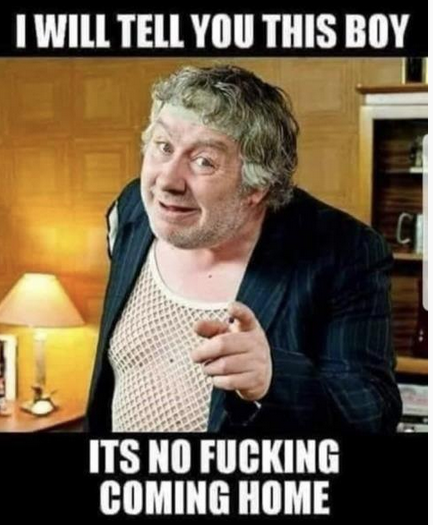 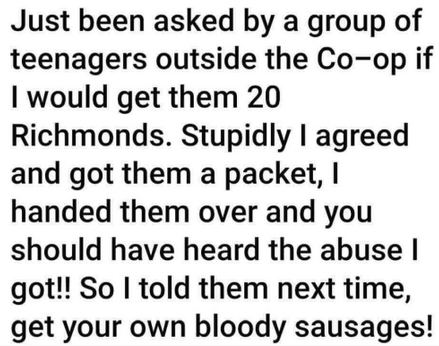 NSP said:
There was a girl in my class at school called Jessica Head. In the year above us her brother, Richard.

An explorer was deep in the Amazon jungle looking for new species when he came across a very strange looking animal. He caught it and took it back to his camp, where one of his colleagues looked at it an said “never seen one like that before; that’s a real rarey, that one”.

And so the name stuck; the creature was called a Rarey. Over the next few years, it lived with the explorer and the Rarey became the explorers companion. Everywhere he went, the Rarey followed.

But alas, the Rarey just kept on eating and getting bigger and bigger until it was just way too big to keep. The explorer thought long and hard about his companion, but eventually concluded that the Rarey had to go. They didn’t, however, have any means of putting the animal down.

Eventually, he came up with the idea of taking the Rarey to the top of a mountain and throwing him off. So the explorer went off and hired a tipper truck, loaded the Rarey into the skip and headed off up the mountain. Eventually, although in tears at the thought of what he was about to do, he found a high cliff and started to reverse back to the edge to do the deed.

It was at that point that he started to hear singing. A beautiful, lilting voice singing. He climbed out of the cab and was surprised to find that it was his companion animal singing so beautifully. He easily recognised the song, which was......

It’s a long way to tip a Rarey.

Unremarkable said:
Is that Welsh or Afrikaans?
Click to expand... 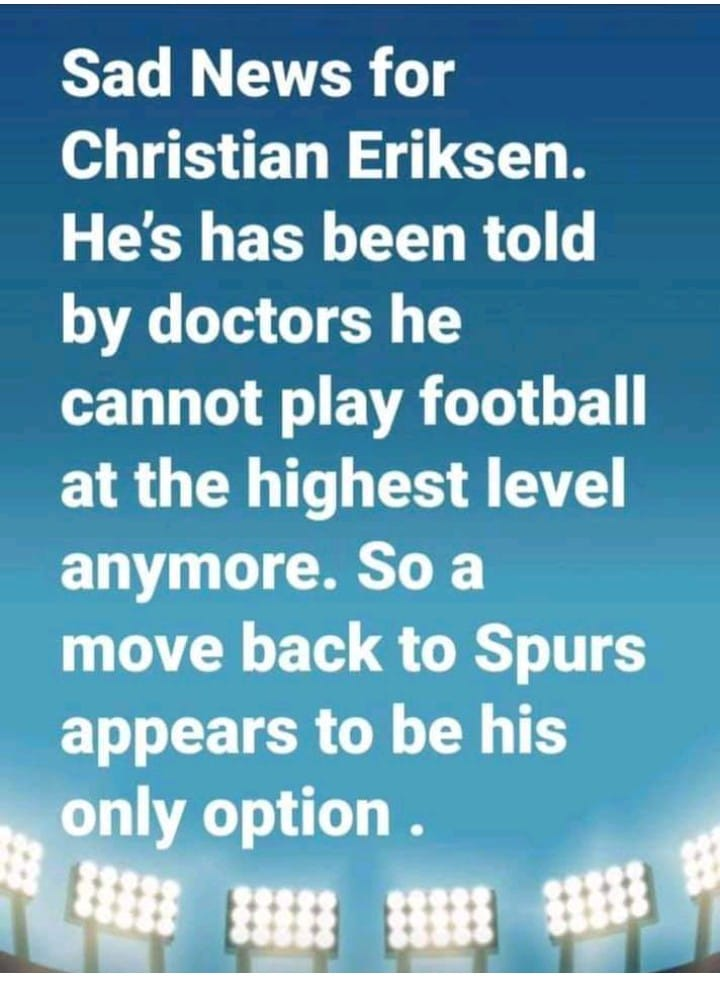 Why do Scouse cars have small steering wheels?

Why does my fridge has a picture of a carrot on the beer drawer ?
Spare a thought for mind readers