Fight Club, well it contains boxing even if that isn't really the point

But then I always preferred to be present and involved, rather than a spectator at sports
Join me at Torn-City - MMRPG , meet interesting people and put them in hospital, so join up here: https://www.torn.com/2322286

maguire said:
stallone is a better actor than he gets credit for imho
Click to expand...

Umm, nope.
As we are on Sports Movies, let me remind you of Escape to Victory...

CaptainRidiculous said:
Umm, nope.
As we are on Sports Movies, let me remind you of Escape to Victory...
Click to expand...

Stallone is a better keeper than he gets credit for.
Tin soldier, Now he knows the truth
Tin soldier, He signed away his youth:

RedDinger said:
Stallone is a better keeper than he gets credit for.
Click to expand...

Starring Dominic West and Josh Lucas. At the 1986 Boat Race, Oxford suffered it’s first defeat by Cambridge in 11 years. Angry at the outcome, American Oxford oarsman Rick Ross imports all of his mates from the US National squad into Oxford as post-graduates so they can help redeem the Oxford program.

A power struggle over training methods and crew selection leads to a bitter clash between the American oarsmen and the Scottish president of the Oxford Dark Blues, Donald MacDonald. The Americans are so irate that they pull out just six weeks before the race, leaving Oxford’s coach to mould an inexperienced crew into a winning team.

When Saturday Comes: A hard drinking northern monkey trying to make it as a professional footballer.
Tin soldier, Now he knows the truth
Tin soldier, He signed away his youth:

RedDinger said:
When Saturday Comes: A hard drinking northern monkey trying to make it as a professional footballer.
Click to expand...

This Sporting Life - Richard Harris in a similar story but with a rugby theme.
The artist formerly known as Bob_Lawlaw

The Brighton Miracle, is the tale of Japan's build up to the 2015 Rugby World Cup and their epic win against the Springboks.

It's a bit of a docudrama interspersed with interviews of Japan Coach Eddie Jones amongst other notables, and pretty compulsive viewing too.

Another personal favourite is Living With Lions, an access all areas look at the 1997 British and Irish Lions tour of South Africa.

A brilliant sequence is the pre test match speech to the forwards by Jim Telfer - it makes the hair on the back of my neck stand up every time I watch it.

There's a YouTube video which was a parody of the speech to promote the 2013 Lions tour to Australia - an absolute must see when you've caught the original.

SeaBiscuit, technically the life of a horse, yet it has some really good moments that explain why horse racing is so very fascinating

A Sunday in Hell

Welcome to the club Mr Ennis

''42'' was awesome, incredible acting by all the Stars in it

Wildcats with a younger Goldie Hawn and Woody Harrelson......well, a younger everybody really.


This tread has reminded me that I wanted to go and see this but never managed it. 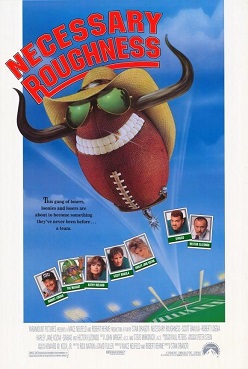 en.wikipedia.org
I wants to finish my little bit and I wants to get home for my tea.

Little Fauss and Big Halsy
Robert Redford and Michael Pollard on the 70s American Motorcycle Assoc scene along with..
On Any Sunday
Endless Summer
both for ambient nostalgia.
Slapshot,
Kingpin,
Caddyshack.
Silver Dream Racer with David Essex which along with his other films I think considerably underrated.
NULL

Watch the Ronnie Peterson documentary on Sky if you like motor racing.
Showed Lauda how to brake with using your left foot to get more speed

Great casting for the other drivers.
If you were a fan back then, you'd recognise Jody, Andretti etc in the 'pre race' meeting scenes.

Alec_Lomas said:
This Sporting Life - Richard Harris in a similar story but with a rugby theme.
Click to expand...

On the kitchen sink/angry young men drama theme, The Loneliness of the Long Distance Runner.
When routine bites hard, And ambitions are low, And resentment rides high, But emotions won't grow...
By voting on this post with a Dumb I confirm that I am a more than a bit stupid and an all round loser.

CaptainRidiculous said:
Umm, nope.
As we are on Sports Movies, let me remind you of Escape to Victory...
Click to expand...

Thread drift: I would offer for the Defence of Stallone's acting skills the truly excellent Copland, where Stallone held his own in a cast which included Ray Liotta, Robert De Niro, and Harvey Keitel.
"I do not resent criticism, even when for the sake of emphasis, it parts for the time with reality" WSC

CaptainRidiculous said:
Great casting for the other drivers.
If you were a fan back then, you'd recognise Jody, Andretti etc in the 'pre race' meeting scenes.
Click to expand...

“I’m not saying it’s my best film, but it was certainly one of the most satisfactory films I’ve made because I’ve had a Walter Mitty idea all my life about what would have happened if I’d really been a Ferrari driver. To be able to indulge your fantasies with ten-and-a-half million dollars is, I...

garner wore chris amon's colours on his helmet. ISTR one of the other main characters using jackie stewarts colours.
is madly in love with the Slug and doesnt care who knows it. from the moment she first got me in a headlock and took my lunch money off me, I knew she was the only girl for me.

Have we had "Children of Glory" yet? The story of the "grudge match" in water polo between the Hungarians and the Soviet Union at the Melbourne Olympics, whilst the 1956 revolution was kicking off in Budapest. It's not something I would have known a lot about (the water polo bit, anyway) except my mother is Hungarian, and a couple of distant relatives were killed during aforementioned revolution, so when they made this film I heard about it every week for a year or two.

Still, sports and armed (and failed) revolution, a good combination ...

The strange disappearance of IC1 in UK advertising…