This is an interesting and exciting first book by Mr. McGonigal. Its subject is his Grandfather, Ambrose McGonigal, known to many who served in Northern Ireland as one of the few Catholic Judges the IRA didn’t manage to murder, and Ambrose’s brother Eoin. These two brothers, both lawyers by profession, were early members of Special Forces in the British Army, Eoin in the SAS, and Ambrose the SBS. 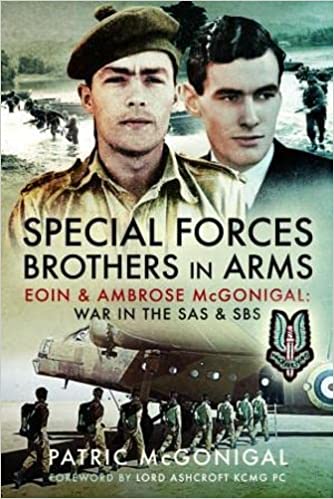 The book covers their childhoods, education, family background and the context of early twentieth century turbulence on the island of Ireland. They were superb rugby players, and toured with the Irish Team, meeting one Blair Mayne during that time. He features heavily later in their story.

Eoin was one of the first two officers selected from an Irish Regiment for Commando training in 1940, and the stories of his training in Arran alongside Mayne are highly entertaining. They were the closest of friends, and it’s intriguing to me that after the disappearance of Eoin on the first ever SAS parachute drop (in Libya), Mayne was incredibly distressed and angry, which may help to explain some of his later behaviours which have been discussed at length elsewhere. The book also sheds light on why Mayne’s VC award was downgraded.

Ambrose McGonigal, MC and Bar, carried out many coastal raids with the SBS and led local resistance fighters in Yugoslavia. His career, although longer than his brother’s, doesn’t receive quite the same coverage. Eoin joined up first and his story is entwined with the story of the birth of Special Forces as we know them today, which means there is more to say.

Ambrose’s career as a lawyer and judge are very interesting to read about, as is his attitude to having to have a bodyguard at all times, and to protect his family from those who wanted to kill them due to his chosen career. (Like Catholics in the RUC, Catholic Judges spoiled the narrative that there were no Catholics in those professions, so the IRA used their own means to reduce the numbers.) Although a pillar of the Establishment, he was renowned for being fair to all who came before him. At a time when hanging was still a mandatory sentence for certain crimes in Northern Ireland, his approach was fair to the Establishment, the victim, the criminal and the changes he could see coming through in society. This was a man I'd like to have met.

This book covers a lot of the story of the founding of the SAS and its initial missions in Africa, which would make a volume by itself. It details the birth of the Commandos and the difficulties of establishing both organisations in the face of opposition from senior, established Military figures. The hard training, disappointments at cancelled operations, loss of morale, disbandments, formation of new units, all weave a fascinating tale of these two brothers’ lives, and make for a great read.

The author has done extensive research using official and unofficial documents, letters, conversations with those who were there, as well as family memories.

The Rebel’s Mark by SW Perry